Solar photovoltaic (PV) system prices at the beginning of April 2013 are on average lower than they were for the previous month. However, further examination of figures from each of the 7 cities and 5 system sizes included in the index reveals a few discernible trends. One is a clear downward movement in average prices for all system sizes in Sydney, Perth, and Canberra in an apparent (possibly temporary) easing of the last several months’ increases there. Another trend is the continuing tendency for systems in  Melbourne and Brisbane (particularly those under 3kW, kilowatts) to become more expensive on a per-watt basis. Larger systems continue to offer the best value for money.

Solar PV system prices for this month are best viewed against the backdrop of the federal Solar Credits multiplier (which was discontinued at the beginning of the year), and the understanding that system prices are anticipated to rise this year due to other factors affecting the industry globally. The fallout from the changes to the STC discount scheme has been apparent mainly in the smaller system sizes (<3kW), which had already been losing popularity among customers even prior to this and in spite of the extra-strength support that they received from the multiplier. Prices for 3kW, 4kW, and 5kW solar systems in most cities in the price index (except Brisbane and Melbourne), however, have either fallen or remained steady.

Solar system price per watt by city and system size

The table below contains $/watt figures (incorporating the federal small-scale technology certificate (STC) discount) to give average system prices for all 5 system sizes in the 7 capital cities.

For STC Zone 3 cities (Adelaide, Brisbane, Canberra, Sydney, and Perth), the STCs helped to decrease system prices by 65c/W on average, calculated based on the STC discounts explicitly detailed by installers when available (i.e. when not omitted as part of a ‘package deal’). STCs contributed 51c/W on average in the Zone 4 cities (Hobart and Melbourne).

High and low system prices are based on installer offerings from all cities and of all system sizes.

The following charts show the $/W cost of installing a solar system since Solar Choice began compiling the data in August 2012.

Predictions that solar system prices would increase in 2013 have been more or less realised, but to date seem to have been most relevant for smaller systems. There is an across-the-board dip in system prices around November-December of last year, followed by a rise from January of the new year. Smaller systems have exhibited a steady rise since the beginning of 2013, although Perth, Sydney, Adelaide, and Canberra have seen (to varying degrees) a reversal in this trend since last month. Sydney is where the cost of installing a system is lowest, with average system prices for all sizes significantly below those of other cities. 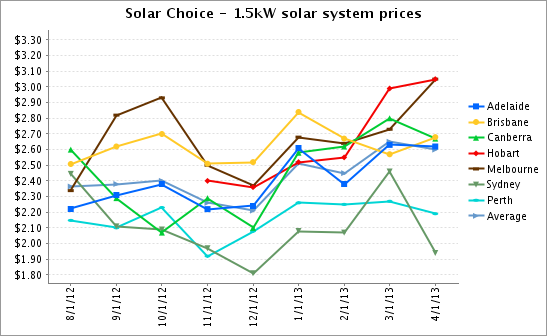 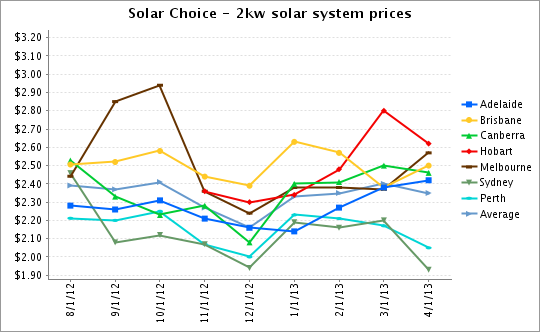 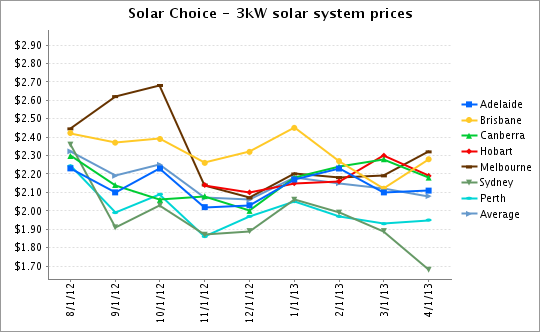 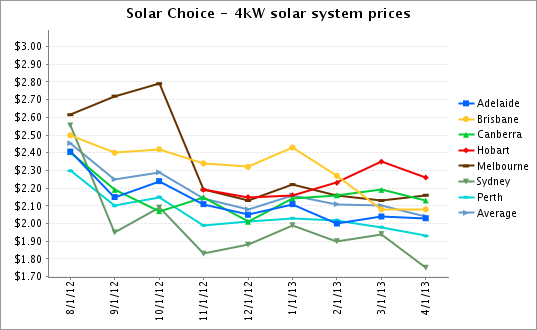 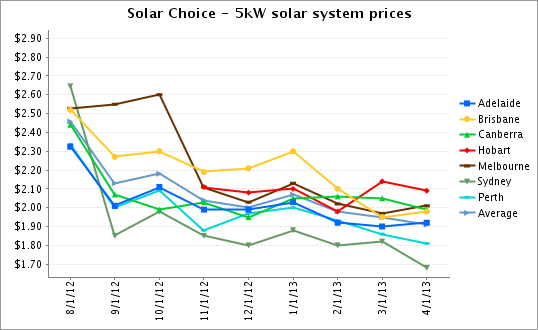 The figures and charts in this article were derived using data from the Solar Choice installer network database, which contains regularly-updated pricing and product offering details from over 125 solar installation companies across Australia. System prices contained herein reflect only prices on offer from installers and do not reflect the price at which systems are ultimately purchased by customers. Prices do not include meter installation charges or extra charges for difficult installations. The discount available exclusively to Solar Choice customers (the Solar Choice Discount) is also excluded from the figures and calculations. Although a range of installer offerings from each city are included in the calculations, average price figures do not incorporate installers’ ‘premium’ offerings.

Solar Choice has helped over 105,000 Australian households make a well-informed choice about going solar. With over 125 of Australia’s top  installers in its installer network, Solar Choice is able to provide free and impartial Solar Quote Comparisons for customers across the country. Solar Choice’s commercial wing has managed the tenders for hundreds of large-scale solar PV projects throughout Australia for a variety of commercial clients, including BHP, Woolworth’s, and McDonald’s Restaurants Australia.

Thanks to Andrew Dunning for his valuable contribution to this month’s article.