Rooftop solar on its own is already affordable enough to be a smart choice for virtually any Australian home with an unshaded roof and some daytime electricity usage. This is true even in the absence of generous, state-backed solar feed-in tariffs and the (slight) reduction of the up-front incentive for solar available through the federal Renewable Energy Target. In fact, Aussie homes have been installing solar at a steady pace long after the most generous incentive programs were closed to new applicants.

The key to getting the most out of a solar PV system these days is to use as much of the energy as possible directly, within the home (‘solar self-consumption‘). Self-consuming solar energy helps the home to avoid purchasing energy from the grid, thereby saving between about $0.20-$0.30 per kilowatt-hour (kWh) depending on where they live and their electricity retailer. The rate solar households are paid to send their excess solar in the grid, on the other hand, is about 8-15c/kWh.

Solar system installation prices have been steady for the past few years- we know because we keep track of them in our Solar PV Price Index. No sudden reductions (or increases) are likely to be on the horizon; the market has stabilised after the initial turmoil of its first few years.

Going solar: Then vs now

Lots of things have changed in recent years with regard to solar power for homes. The business case for going solar – the investment-worthiness of solar panels – has quickly progressed through roughly three stages since the solar panel boom began in Australia in around 2008.

Making a long story short, these stages were:

Stage 1 (until about 2011): High solar system prices, high incentives. Lots of people installed solar despite relatively high prices thanks to government incentives on the federal and state level. “Solar is a no-brainer, and there’s a deadline!”

Solar power is here to stay

At this point, it seems fairly clear that residential solar power is here to stay in Australia. Close to 2 million homes already have a solar PV system, and there is now more than one panel installed per human being in the country. Virtually all industry analysts and investment houses – both within and outside Australia – are predicting that solar (and battery storage) are the future.

Solar system prices for homes have come down

The strongest evidence for the permanence of solar as a household fixture in Australia is the solar system price trends witnessed over the past several years.

The chart below offers a glimpse into how average prices have changed since 2012. Systems cost about 40% less to install in January 2018 than they did in August 2012, according to the data that we’ve been keeping track of. 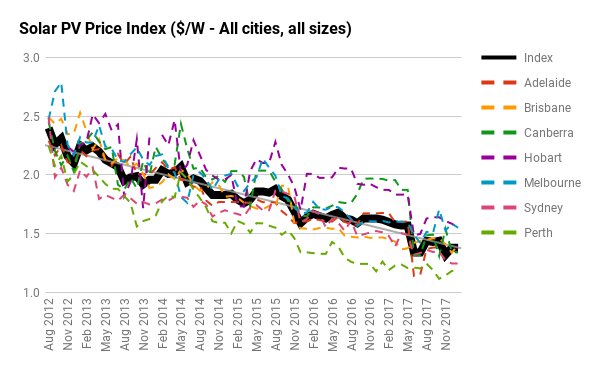 You can also get pricing specific to your home and location by requesting a Solar Quote Comparison by filling out the form to the right of this page.

Several years ago, it was common for most homes to install 1kW, 1.5kW and 2kW solar systems. As prices have come down, however, the average solar system size has increased – and these days, 3kW, 4kW, 5kW and even 10kW solar systems are not uncommon. In fact, the larger system sizes almost always offer better value for money than smaller ones.

Not sure which size system is best for your home’s needs? Check out our Quick Guide to Solar System Sizing or try Solar PV System Sizing Estimator Tool.

A look at solar payback periods in each capital city

Generally speaking, it’s important for homes to choose a solar system sized appropriately for their situation – meaning that they can use at least 30% of the energy it produces directly. However, if they can use even more (e.g. 50%), then the business case gets even better. According to our data, with a self-consumption rate of 30%, payback times for 5kW solar systems are under 6 years on average, nationally; in Adelaide, Brisbane, Darwin, Perth and Sydney they’re easily under six years, as per the table below. The internal rate of return (IRR – a metric for comparing investments similar to ROI but more comprehensive) for a solar system in each city is easily over 10% – on average 18% but as high as 24% in Adelaide.

Note that the table below uses average system prices to be conservative. Solar system owners may see even shorter payback periods and better IRR if they find systems for less without compromising quality, or if they manage to increase their self-consumption rates above 30%.

*Outputs in table assume average electricity consumption of 25kWh/day, north-facing panel array tilted at 30 degree pitch, electricity inflation rate of 2.5% per annum and discount rate of 5%. Note that we haven’t examined the case for going solar on a time of use tariff type, but that results are generally similar.

**Based on figures from the most competitive plans on EnergyMadeEasy and other relevant websites.

Did you know that most Australians have a choice of electricity provider? Residents of all states/territories besides WA and the Northern Territory can shop around for better rates for free using sites like EnergyMadeEasy.gov.au and Wattever.com.au.

Conclusion: Is solar PV still worth it in 2018? Absolutely

In 2018, solar power systems remain affordable and attractive, especially in light of the plague of high electricity prices. Solar feed-in rates may be not be spectacular, but with system prices as low as they are it’s not difficult to see favourable returns from putting solar on your roof, particularly if you shop around and manage to find a good deal. Furthermore, making efforts to increase your rate of direct solar energy consumption (e.g. with a home energy management system) will also help to maximise returns.

In places where low system installation prices collide with high electricity prices, solar makes spectacularly good sense without much effort. But even in cities with higher average system prices put payback periods over 7 years in our examples, it doesn’t take much to improve the financial case. We recommend shopping around for the best deal possible and ensure that you can use the solar energy that your system will produce.