This article is focused on behind-the-meter PPAs

So how does a behind the meter Solar PPA work?

Solar Power Purchase Agreements (Solar PPAs) are one of a number of options available to a business to finance a solar project. Through a Solar Power Purchase Agreement (Solar PPA) a third party covers the cost of installing the Solar Power System at a business’s location and sells the energy generated from the system to the business at a lower rate than their retailer. Typically these third parties are financiers who are seeking to make a return from the revenue stream of selling the energy to the business. At the end of the agreement (usually 10 or 15 years) the ownership of the system along with the full benefits of free energy passes to the business.

Is the Solar PPA Provider the same as the Installer?

In most cases the Solar PPA provider is a separate third party and will not perform the installation themselves. If you received a Solar PPA offer from a solar installer, it is likely they are working with a bank or financing company to provide the Solar PPA terms.

Importantly there are a number of Solar PPA providers in Australia who are seeking to build a portfolio of projects. If desired, it is possible to retain control over which installer is performing the installation and how the system is designed and seek a third party Solar PPA provider.

Unfortunately, there are no industry standards or legislation that regulate how Solar PPA are designed meaning it is important to understand the terms of the PPA you are being offered.

Often Solar PPA providers will introduce some or all of the below terms to enable them to provide the cheapest rate at the start of the contract:

What are the pros and cons of a Solar PPA?

Why are so many companies using Solar PPAs?

Volatility in energy prices creates uncertainties around operating costs. A Solar PPA enables a business to create cost stability without needing to put up the investment costs. Unlike a lease or loan, a Solar PPA shifts the operational risk of under-performance or product failures to the Solar PPA provider who loses their revenue stream in the event of issues. This means there is less risk assumed by the business and a greater guarantee that a high quality system is going to be installed. 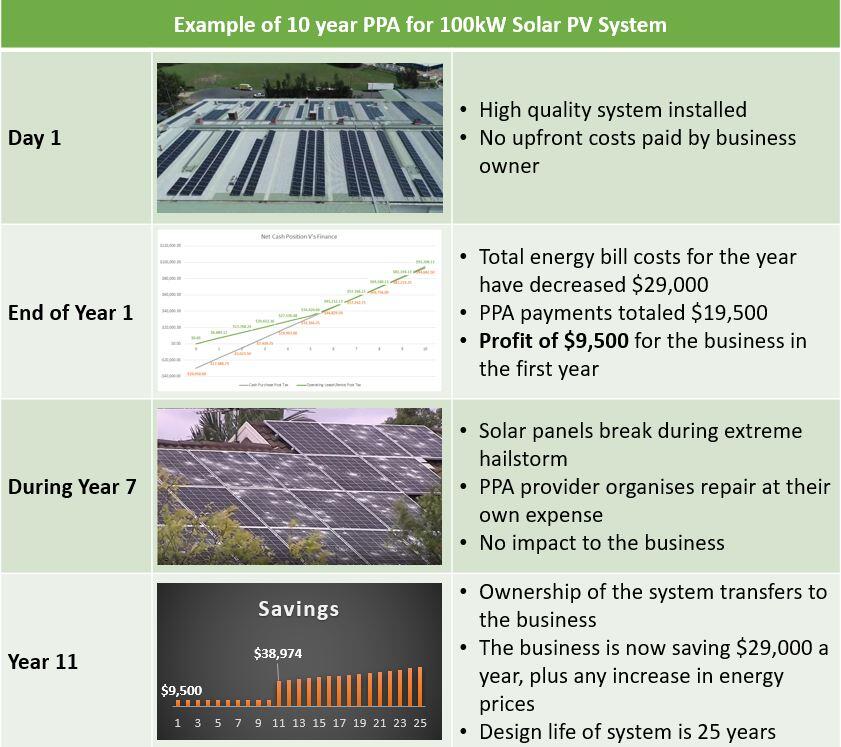 For a free consultation on your companies options with PPAs and solar power, contact Jeff Sykes at jeff@solarchoice.net.au