The Solar Price Index for July 2019 as published monthly by Solar Choice noted a 13% rise in residential solar prices in Victoria following the re-opened rebate scheme being snapped up in the first 3 days.

Solar Choice publishes average residential solar prices based on live pricing data from their national database of CEC-Accredited solar installers providing an accurate guide on the current cost of solar, state by state. 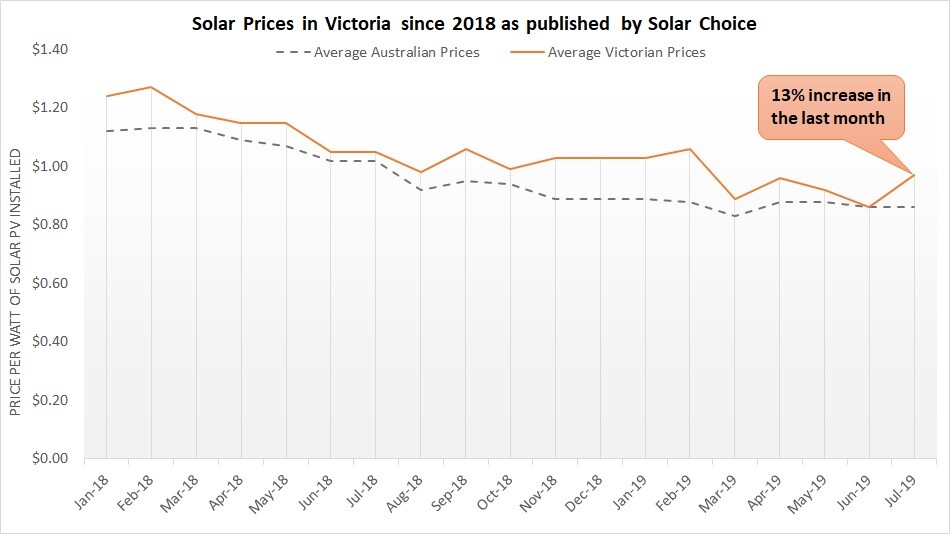 The Victorian State Government has provided a rebate (in additional to the federal STC rebate) which enables eligible Victorians to cover half the costs of going solar up to a maximum contribution of $2225 for Solar Panels or up to $4,838 for solar battery systems.

This rebate has been running since August last year which covered funding for approximately 24,000 homes which ran out earlier this year. The scheme re-opened on the 1st of July, but was ‘sold out’ in 3 days due to pent up demand.

How are Solar Installers coping

We have seen a number of installers suffering from the lack of clear communication from the Victorian government as the pauses without notice to the scheme have made Solar PV a difficult product to sell to Victorians.

Understandably solar buyers would rather wait a month for the scheme to reopen leaving solar installers to scramble for work in the down periods – a familiar challenge often referred to as the ‘solar-coaster’ in the industry.

Why are prices going up in Victoria?

After the schemes were announced in August we saw prices decrease as many installers rushed to get their Victorian Electrical Contractors Licence and extend operations into the state.

However it seems that installers were unable to maintain these prices amid stops and starts in demand from consumers. We have also seen some installers exit the Victorian residential solar market as a result.

To get monthly updates on solar prices in your state sign up to the Solar Choice Newsletter.