The federal government has bowed to the push for a new coal-fired power generator in Queensland, and agreed to a feasibility study for around Gladstone, or at the site of the former Collinsville power station near Townsville.

We can save them the trouble by making the following observations.

First, the need for new supply has long gone. As AEMO noted in its latest forecast, known as the Electricity Statement of Opportunities (ESOO) 2018, Queensland is now an exporter of energy, and that’s not about to change any time soon.”There are no supply scarcity risks forecast in either Tasmania or Queensland over the 10-year modelling horizon,” AEMO says. And that’s largely because it will have plenty of wind and solar coming onto the grid.

Second, the cost assumptions chorused by Coalition politicians and the Murdoch media, and claiming that coal is cheaper than renewables, are bogus and hopelessly out of date. 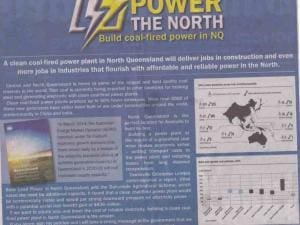 In full page ads in papers like this from the Townsville Bulletin, which locals say ran for a long time, it was claimed that coal was cheaper than renewables, but this was based on a four-year old study from the CRC

As the CSIRO and AEMO stressed in their assessment late last year: Wind and solar, even when lumped with between two and six hours of storage, is cheaper than any coal option, and that is before taking into account the cost and impact of emissions.

Furthermore, AEMO notes, there is no anticipated closure of any coal plant in Queensland – which has Australia’s youngest fleet – for at least a decade, and then another five years until the next scheduled retirement.

So If any generation is needed, it would be generators flexible enough to dial down their output during the daylight hours, and other times of high output from cheaper renewables. Coal generators, already behind the high-ball on costs, wouldn’t be able to compete with lower average output.

Add to this that coal power is dirty, and completely out of step with efforts to curb global emissions; that a new coal plant would take forever to build, and; that there are so many cheaper solutions, and you can see Queensland already has its answer.