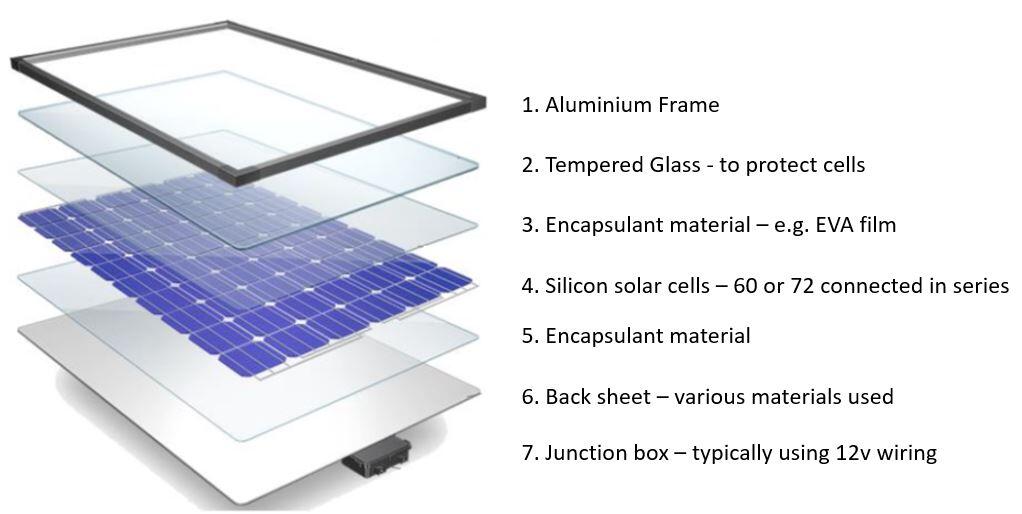 When you think about it, the ability to make electrical power from sunlight is a marvelous process.

So how do modern Solar Panels actually work?

Solar panels consist of 60 or 72 silicon cells. When sunlight hits these cells, electrons within the silicon at an atomic level are shaken free and move around. An electric current is simply the movement or flow of electrons in the same direction. A bolt of lightning, for example, is a sudden surge of electrons across a build-up of charge within clouds, or between clouds and the ground.

Looking in further detail, the silicon (Si) used in solar panels is adapted during the manufacturing process to improve the quantity of available electrons. Often phosphorus (P) and boron (B) are bonded to opposing layers of silicon. The phosphorus add additional available electrons and provides a negative charge, while the boron reduces the available electrons providing a positive charge. The resulting electrical field is primed for when sunlight hits the panel to deliver a flow of electrons to the junction between cells.

If you connect a group of these PV cells in a circuit within in a panel, and install a number of panels side by side, you can create a large flow of electrons and DC electricity. The electricity used in households, however, is AC 240 volts. Therefore a box called a solar inverter – usually no bigger than your average shopping basket – is used to convert the DC electricity to AC so it can be used immediately by occupants and the electricity grid.

How are solar panels manufactured? Step by Step

As with many products the production process of the majority of solar panels has moved to Asia and predominantly China. The creation of manufacturing facilities at enormous scale and modern techniques like robotics has led to the rapid decline of cost of solar technology, and overall, an improvement in quality.

Silicon is the second most abundant element on Earth following Oxygen. Silicon compounds are found in rocks, sand, clay, water, plants and even some animals. In order to purify silicon it is heated to its boiling point (1,410° C). Single crystals are created by extracting cylindrical crystals from molten silicon. Solar Panels can be termed monocrystalline or polycrystalline. Monocrystalline solar panel cells are derived from a single silicon crystal (not unlike single origin coffee), while a polycrystalline solar panel uses a blend  which results in a slightly lower efficiency.

While silicon is the active material in a solar cell, there are a number of components that go into producing a modern solar cell. Typically the silicon is cut into thin sheets the approximate width of a piece of paper. A coating is applied to the sheets of silicon which improves the absorption of sunlight and minimising any reflection. Metal conductors are then added to facilitate the flow of electrons – which are the visible small gridlines. Each cell contains a positively (boron) and negatively (phosphorus) charged silicon wafer which meet at a conduction junction to instigate the flow of electricity.

It is interesting to note that some solar panel manufacturer’s processes will only commence from this step and they purchase pre-produced solar cells from other manufacturers. Typical solar panels in Australia use 60 cells or 72 cells combined together in a single panel. Each panel will have top plexiglas sheet to protect the cells, an encapsulent material like EVA between each layer and a back sheet to protect the silicon from moisture and soiling. The solar panels are usually held together with an aluminium frame and have an output/input junction box when solar installers can easily string together solar panels in an array.

Europe, USA, Australia and other countries each have different requirements for a Solar Panel to become accredited and available for use. Each have different testing requirements that enable a Solar Panel Manufacturing to represent their different technical specifications in the product data sheet. In Australia the Clean Energy Council is the body tasked with testing and accrediting new solar panels. There is also one major independent tester of solar panels called DNV GL. They have a rigourous testing procedure and publish a list of top performers each year to help consumers identify high quality manufacturers.

The manufacturing process combines the below list of parts to a solar panel:

Each part of the solar panel has been refined and improved over the years to improve efficiency, durability and to reduce the cost of production. The below graph provides an overview of the how the cost of solar panels as declined over the last 8 years directly linked to the improvements in the manufacturing processes. 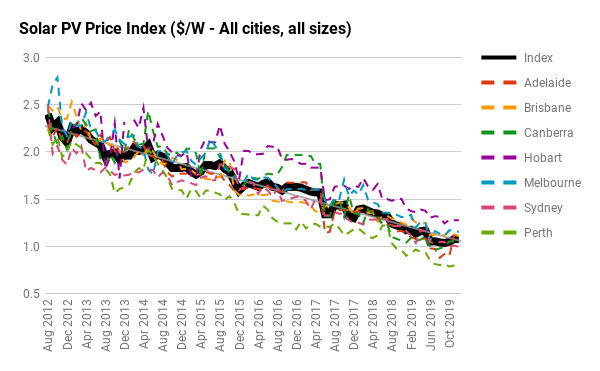 Other forms of Solar Panels and Solar Power

There are emerging technologies in solar that present possibilities to create a step change in the efficiency of panels. These include graphene coating of solar cells, lightweight panels that don’t use glass and are flexible. To see a more indepth review of the different types of solar panels and the different brands – see this article.

Additionally there are alternate forms of solar power such as Concentrating Solar Power (CSP), where instead of solar panels, mirror panels are used to focus sunlight on a central tower where water is heated to high temperatures and is converted back to energy through steam turbines. Solar thermal panels work slightly differently as well, where the water runs through the panels in copper tubing that heats the water while it runs through the panel and returns to the hot water tank.

Compare quotes from up to 7 pre-vetted installers in your area now.
Since 2008 our knowledge and sophisticated software has allowed over 160,000 Australian households and businesses to make a well-informed choice on their solar & battery installer.