For most people, the promise of home battery storage is mainly about the ability to save sunlight so that it can be used later, after the sun has set. ‘Tariff arbitrage’ is another great way to save money with a solar-plus-battery storage system. What is tariff arbitrage and how does it work?

In short, tariff arbitrage is the practice of purchasing electricity from the electricity grid when it is cheap, and storing it for later use when grid electricity is expensive. It’s the same basic concept as storing solar energy for later use, but charging with energy from grid rather than from your solar panels. In order for tariff arbitrage to be possible, you need to be on a time-of-use (TOU) billing arrangement with your electricity retailer.

To be clear, for most ordinary homes, a ‘flat rate’ tariff is usually more economical than a TOU tariff; the same goes for homes that have solar PV systems. But once batteries enter the equation, switching to TOU begins to look more appealing. The main reason for this is that the time factor becomes more flexible – batteries allow you to use your stored energy when it is most economically advantageous for you to do so.

Three methods for getting the most out of your batteries

1. Direct solar self-consumption (you use the ‘free’ solar energy directly, when the sun is shining)

Let’s say you pay 25c per kilowatt-hour (kWh) for grid electricity on a flat rate tariff. Every time you use 1kWh of solar energy by running your appliances during the day, you save 25c. The downside here is that you must use the solar energy as it is being produced. Shifting some of your electricity usage to the daylight hours is the best way to do this. In fact, if you don’t use your solar energy directly, it will automatically go into the grid and you’ll be credited only 6-8c for it. Looked at this way, you’re basically losing 17-19c of potential savings for every kWh of solar that you put into the grid. This is why solar ‘self-consumption’ is the mantra of Australian solar system ownership these days – not to mention why solar homes are helping to shift electricity consumption patterns of the country as a whole.

Because solar energy production tapers off right around the time that peak electricity pricing begins, without battery storage there isn’t a lot of incentive to switch to TOU billing unless you use very little electricity in the evenings (which is not the case for most homes).

We’ve written about how to get the most out of your solar PV system (without batteries) in the following two articles:

Again, let’s assume that you currently pay 25c/kWh for grid electricity on a flat rate tariff. If you can’t consume all the of the solar energy that you produce during the day (or just want to save some for later), you can store it in batteries. Let’s also assume that the round-trip storage efficiency of your battery is 90%, so for every kWh of solar that you store, you get 0.9kWh of usable energy. Your stored energy is therefore worth about 23c/kWh – almost as much as using the solar directly.

Now let’s imagine that you switch to a TOU tariff under which you pay 43c/kWh for peak rates, 10c/kWh for off-peak, and 17c/kWh for shoulder rates at the times detailed in the table below (from Energy Australia). If you charge up your batteries with solar during the day, you stand to save as much as (43c x 90% = ) 38.7c for every stored kWh of solar energy that you consume. 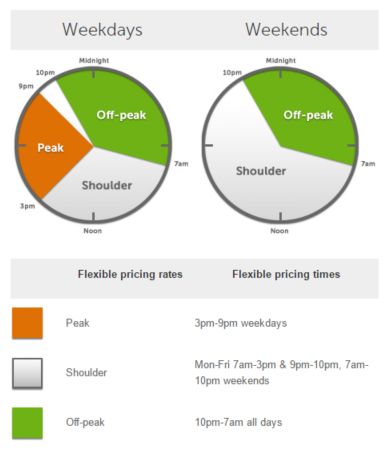 A typical schedule for a TOU tariff. (Example via Energy Australia.)

Sounds great, right? But batteries are expensive, so you may have opted not to install enough storage capacity to get you through a whole evening’s worth of electricity usage. A typical scenario would look something like the table below, with the whole of the battery’s capacity being drained soon after the sun sets, as household electricity demand begins to rise. The home in question (using 20kWh of energy per day, with a 5kW solar system & 7kWh of battery capacity) would still end up purchasing the bulk of its energy from the grid during the evenings. If you’re on a TOU tariff instead of a flat one, this could ultimately end up being more expensive – so if you are contemplating it, weight carefully the decision to switch between plans.

Electricity flows diagram for a home with 20kWh of daily consumption, 5kW solar system and 7kWh of battery storage. (The blue line represents the home’s consumption pattern – in this case the ‘double peak’ pattern associated with families who have school-age children)

Want to learn more? You can play with some of the numbers using our Battery Storage System Sizing & Payback Estimator Tool.

Can’t I save more money by switching to TOU?

Yes, it’s true: Using stored solar energy on a TOU tariff will save you more per kilowatt-hour (up to 38.7c in this example) than what you can save with solar on a flat rate (up to 23c in this example). The reason we list solar self-consumption as the best way to save money relates mainly to the relative affordability of solar PV as compared to batteries – at present, a solar-only system has a much shorter payback period than a solar-plus-storage system, even though solar-only won’t necessarily save you as much per kilowatt-hour. We’re also assuming that the battery bank you install will only cover a portion of your evening usage – in which case you could end up spending more on electricity from the grid in total than on a flat tariff without batteries.

3. Energy tariff arbitrage (you purchase grid energy on the cheap, store it, and use it later)

The third option for squeezing economic value out of your solar-plus-storage system is tariff arbitrage. Here, you’ve switched to a TOU pricing plan and you’re taking advantage of the price differential between peak rates and shoulder/off-peak rates by charging your batteries with the grid.

Tariff arbitrage with grid charging should deployed only in situations when you have a partially or completely empty battery and no solar energy available to fill it up. Here are some examples (using the same TOU pricing as above) of when tariff arbitrage can be useful:

Another way you can save money with a battery bank is by taking advantage of programs available through electricity retailers whereby you are rewarded for exporting your stored energy into the grid during peak demand events. Reposit Power is the most well-known technology company in Australia who can support this functionality with its ‘GridCredits’ program; to date they’ve paired up only with electricity retailer Diamond Energy to offer a reward of $1/kWh for stored energy sent into the grid during ‘peak pricing events’. It’s still unclear how frequently such events will occur, but in any case GridCredits should be seen as the frosting on the cake of the savings possible with home battery storage.

Is tariff arbitrage right for your home?

Tariff arbitrage is a great way to get more out of your battery storage system. Australia’s residential solar PV system prices are some of the lowest in the world, making going solar (without batteries) a common sense investment for most homes. Battery prices, on the other hand, remain high, which in turn means that solar-plus-battery systems have longer payback periods than conventional solar-only systems – even though the annual power bill savings may be higher. Using your batteries for grid-charging & tariff arbitrage in addition to solar charging is a great way to get them to ‘work harder’ – potentially reducing payback time significantly.

Keep in mind, however, that not all battery banks are designed to be cycled more than once per day (Tesla’s Powerwall, for example, is only meant to be fully discharged once per day, whereas Enphase’s AC Battery is designed to do two cycles per day). What’s more, you’ll also want to ensure that your solar-plus-storage system has a brain – either in the inverter or in an energy management system – that allows it to handle energy flows in order to maximise savings for you. Most good battery storage systems will come with some sort of basic functionality along these lines – but ask your installer to be sure.