Having just published an article on the state of Australia’s battery storage market at the beginning of 2017 (recently updated), we decided we would endeavour to shed a bit more light on payback period differences between each capital city. Which cities have the best conditions for home solar battery storage? We’ve ranked them below (with an explanation of our process & assumptions at the bottom of this article).

Please note that payback periods for solar systems on their own (without batteries) are generally still much shorter than solar + battery systems in Australia (see here), mainly due to the price of battery storage – which remains high. As of now, we recommend batteries mainly to people who are focused on energy independence and lower energy bills, but they do not yet make great sense as an investment decision.

That being said, we’ve seen a ton of interest in battery storage from our customers, and as such have put together this ranking of capital cities based on their battery-friendliness. Perth was the best overall city for solar battery storage, thanks to low solar system prices, high grid electricity prices and ample sunshine. The payback period was shortest for the smallest battery system on a TOU tariff, coming in at an impressive 6 years. High electricity costs coupled with competitive solar installation prices also helped to make battery storage attractive in Brisbane. The average payback period for the city was 7.4 years, but this could go down as low as 6.4 for ‘small’ battery system owners on a flat rate tariff. 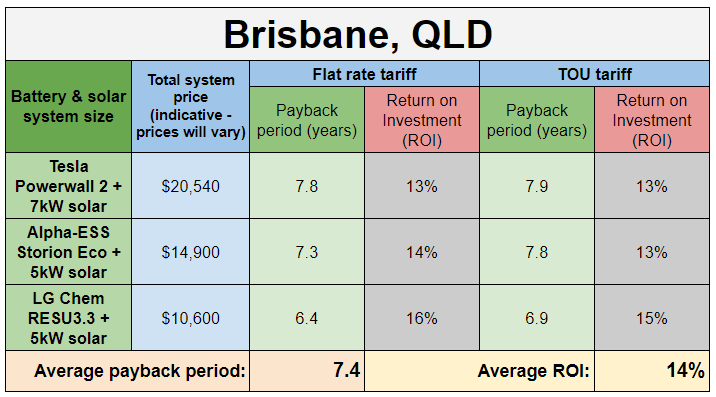 Solar & battery system paybacks were on average just under 8 years, with flat rate tariff customers having shorter paybacks than TOU customers based on our initial assessment. However, paybacks on TOU systems could be shorter if associated demand charge savings are also taken into account (our modelling assumes customers will pay the demand charge every day, but the system may help them to avoid this charge). Additionally, residents of Adelaide’s downtown area may be eligible for battery system rebate of up to $5,000 depending on their situation, which will shorten paybacks further. While 9 years appears to be the average payback period for a solar & storage system in Sydney, the shortest payback that popped up in the results was 6 years for a small battery bank on a TOU tariff. 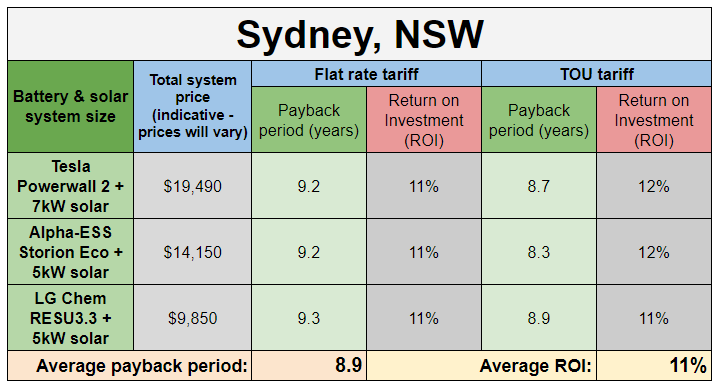 Solar system prices for Melbourne are slightly higher than the previous four cities listed in this ranking, due in part to the smaller incentive available through the federal Renewable Energy Target (which is in turn due to the smaller amount of sunshine that falls on Melbourne on average throughout the year).

That being said, electricity rates in Victoria’s capital are still about as high as they are in Sydney, Brisbane & Perth, making solar a worthwhile investment on its own, and increasingly attractive for solar + battery systems as well. 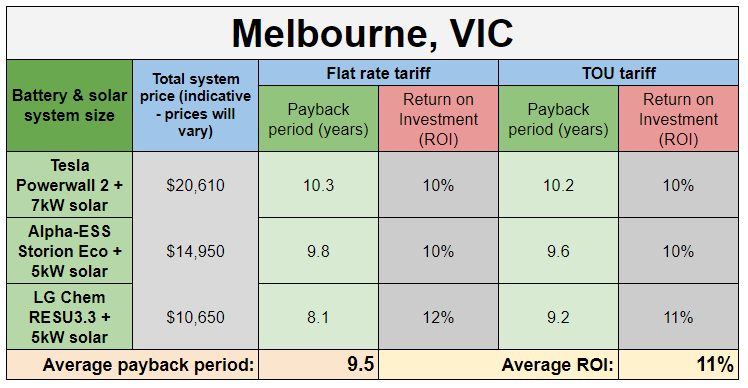 Grid electricity prices have recently increased in Canberra, bringing the investment case for solar & batteries into line with much of the rest of the nation. Although the average payback period for our analysis was just under 10 years, it’s important to keep in mind that we have not taken into account discounts available under the ACT’s NextGen incentive program for energy storage, which will subsidise battery installations (among other types of storage) for thousands of households.

Even before subsidies, batteries are already beginning to look attractive for homes on TOU tariffs who opt for a smaller system, with paybacks around the 8 year mark.

If you live in Canberra, do your research to understand how the incentive program will affect the payback period for the system that you buy – you may find the results are significantly rosier than those detailed in the table below. 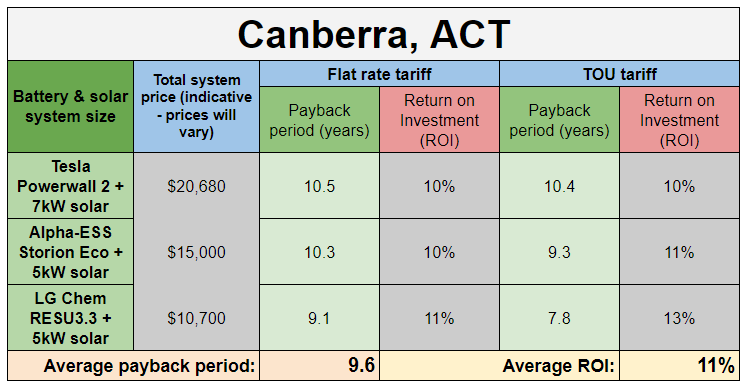 In spite of being the least sunny capital city and having some of the highest solar prices, batteries are beginning to make sense even in Australia’s least sunny capital, with an average payback period of just under 11 years for solar & storage systems. High electricity rates go a long way towards explaining why this is the case. Despite the fact that Darwin is Australia’s sunniest capital – and the only one located in the tropics – the incentives for solar system owners in the state mean that batteries do not make any financial sense at all.

Key takeaway: All in all, in Darwin the payback period will be longer for a solar + battery system than it will for a solar only system – even if you spend the same amount of money (e.g. $18,800) on the system. Until the feed-in tariff rate drops, batteries will make no sense for Darwin customers.

*N.b. An earlier version of this article incorrectly assumed that the solar feed-in rate for Darwin customers was 8c/kWh. In reality, the rate is equivalent to the retail tariff rate at time of export.

Important caveats about these results

The payback period and returns for a given solar + battery storage system will depend on the exact circumstances of the home in question. The conclusions we’ve drawn here (using SunWiz’s PVSell software) are based on only a handful of scenarios and are meant to act as a bellwether for the viability of battery storage in Australia’s capital cities. Also keep in mind that we’ve also left out incentives available in Adelaide, the ACT and parts of WA – which could make a big difference in reducing payback times and increasing the attractiveness of a battery storage investment. 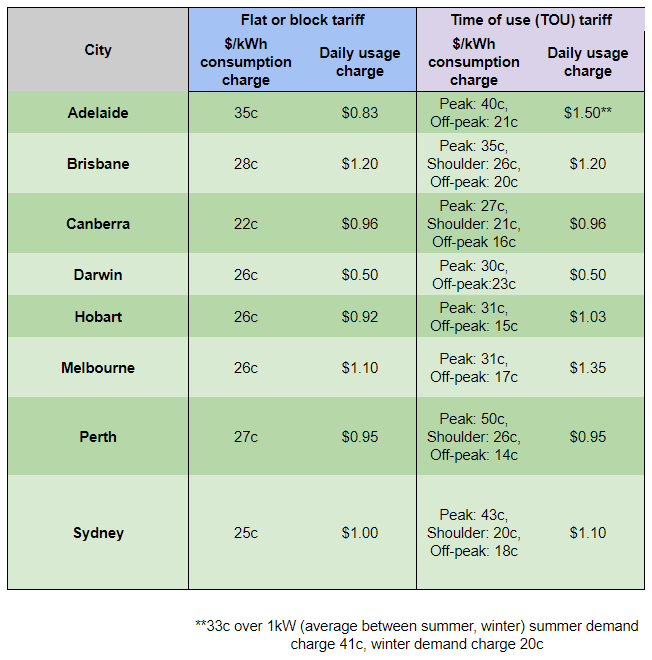 Average solar system prices for each city as of August 2017: 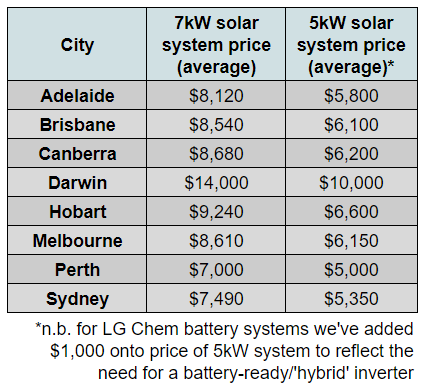 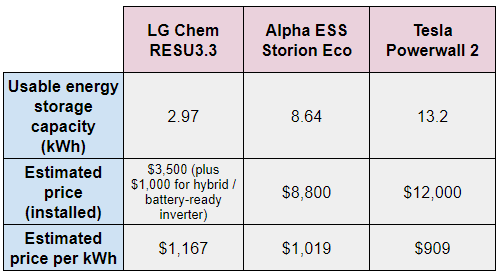