2017 has been a year of records for Australian solar power, and the year’s not even quite finished yet. Here are some of the highlights of the 10 records that have been broken in 2017 (some of them multiple times).

1. Fastest time to reach 1GW of commissioned solar in a calendar year.

There’s only been one year where Australia has commissioned more than 1GW of PV – this was in 2012, where there was 1.01GW of sub-100kW PV and 1.06GW of PV commissioned in total.

SunWiz’s Large-scale Lookout tracks every system above 100kW that is mentioned publicly. It shows that over 114MW of systems over 100kW have already been commissioned in 2017 (of which Kidston Solar Farm contributed 50MW). Our current tally is therefore 1.00 GW by the end of November. 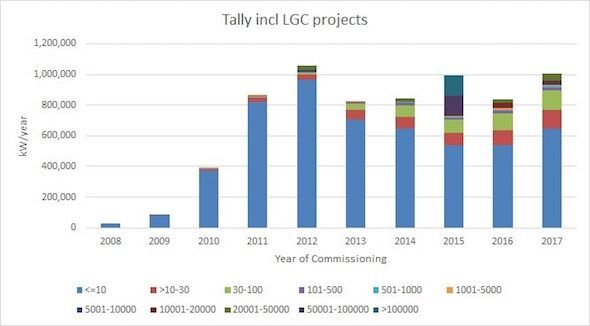 2. Record volume of solar commissioned in a calendar year.

The figures above show that we are certain to exceed our previous best of 1.058GW in 2012. December’s STC registration alone will undoubtedly exceed 60MW, on top of which there will be 2017 installations that register STCs in 2018, plus further 2017 LRET systems that we discover in coming months.

Already by November there has been 285MW of commercial installations commissioned in the 10kW – 1000kW range. This beats the previous best in 2016 of 228MW.

4. Record volume of sub-100kW solar registered in a month.

In November 2017, 122MW worth of STCs were registered, beating the previous record held in 2011. Unfortunately, the CER is yet to audit all of these certificates, so its likely this record will be unbroken next month. Still, its a stellar result, and its worth noting that both October and November will be in the top 5 months of registration, regardless of the CER audits outcome, and that 2017 has seen record monthly volumes set for any March, September, October, or November (previous years have been much quieter in the tail-end of the year). 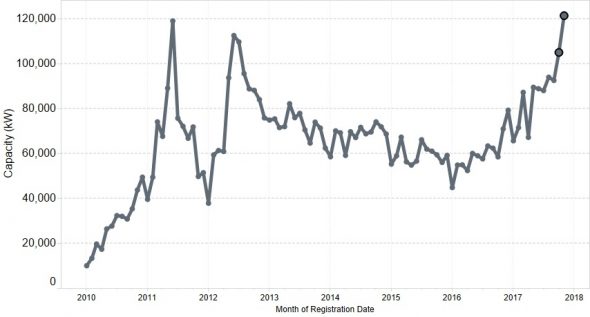 5. Record volume of PV registered in NSW in any month.

After the intense rush to install solar before the cut-off date of its gross FiT in mid-2011, NSW’s solar installations languished. This all changed in 2017 with exceptional growth, to the point where over 30MW was of sub-100kW PV was registered in NSW. Again the CER auditing process may roll back the figures to below-record levels. 6. Record average system size in the sub-100kW market- which in October hit 6.7kW/system.

This is an indication of both the growing size of residential systems (which are now as commonly sold in the 6-8kW range as they are in the 5kW range), and the increasing volume and proportion of the market that is commercial. 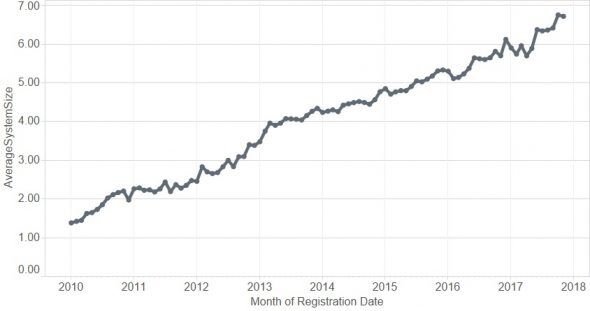 7. Record proportion of system volume in the 75-100kW range.

8. Record proportion of the market that is commercial.

These happened across the year, and there were some months when record volumes were set in every commercial system size sub-range. 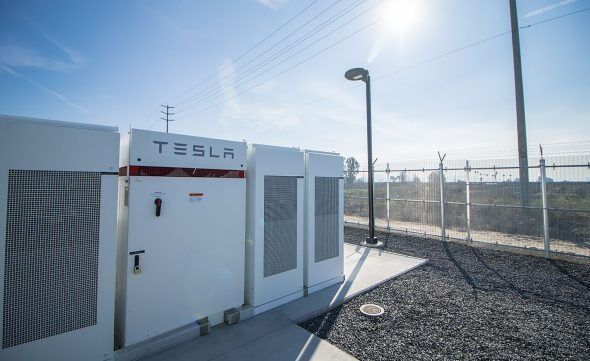 If you don’t already subscribe to Sunwiz’s Insights service, then a) you’re missing out on regular updates like these, and b) now is the perfect time to get our 2016 Year in Review – which includes a 3 month subscription to Insights that means you’ll also automatically receive the 2017 Year in Review.

Since 2008 our knowledge and sophisticated software has allowed over 160,000 Australian households and businesses to make a well-informed choice on their solar & battery installer.
Warwick Johnston
Managing Director at Sunwiz
Warwick Johnston is the managing director at SunWiz, Australia's leading solar consultancy. He is also a board director of the Clean Energy Council, and an Australian representative to the International Energy Agency.
Latest posts by Warwick Johnston (see all)