According the preliminary figures released by Wiki-Solar late last month, global utility-scale photovoltaics added 14.2GW in 2014, which doubled the 2013 total and brought total generating capacity to 35.9GW in 2014.

The overwhelming majority of the total capacity continues to be shared among North America, Asia, and Europe, though Africa and South America saw sizeable additions last year. The approximate breakdown among this big three is 12.7, 10.7, and 10.7GW for Asia, North America, and Europe, respectively. 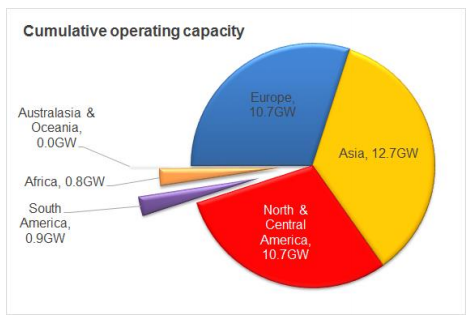 Europe has continued its upward climb after several years of stagnation, with much of the growth being driven by the UK. According to some analysts, the UK has the potential to overtake Germany and India in the coming years, thereby becoming the third largest solar market. Aside from Europe, China, India, and the US are also expected to have long-term stable growth.

The US, China, and Germany currently occupy the top three spots with regard to utility-scale power plant capacity. The top fourteen markets account for 94 percent of the world’s utility-scale solar capacity. It is anticipated that, by the end of 2015, thirteen countries will be have over 1GW installed.

Conspicuously absent from Wiki-Solar’s list is Australia. Although a world leader with regard to residential rooftop solar capacity, Australia lingers far behind the rest of the globe in terms of utility-scale solar, despite enormous potential. This has been largely attributed to uncertainty surrounding the Renewable Energy Target, which has stymied large-scale renewables growth in Australia since the current government took power. Nevertheless, many industry players and campaigners consider a matter of ‘when, not if’ before Australia comes into its own as a large-scale solar power.