The ability of rooftop solar to shift the peak of consumption has been highlighted by new analysis from the Australian Energy Market Operator (AEMO) into events during the recent heat-waves that hit the southern states of the country.

The AEMO data has also confirmed that solar PV has helped shift the operational peak later in the day. It compared how the grid performed during the heatwave in 2014 and a similar one in 2009. 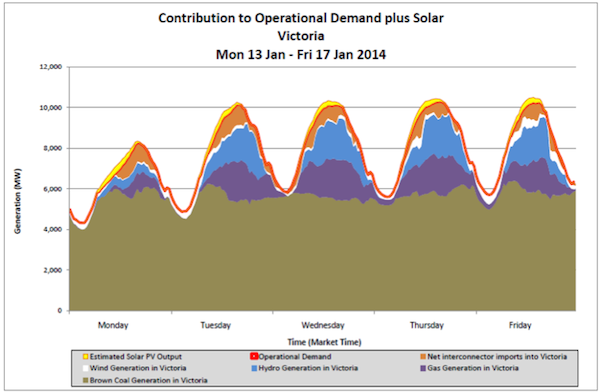 
The blue line shows demand in 2009, when there was little rooftop solar PV, while the yellow line reflects 2014 demand, including solar, and red is demand from the grid not including solar.

“The contribution of solar is a noticeable percentage of the total demand in South Australia,” AEMO says.

“The data indicates the solar could be contributing to shifting the time of the peak demand in South Australia during the high demand days.” It notes, two of the peaks occurred at 6.30pm, when they had occurred much earlier in previous years.

It could be that with the addition of battery storage, or even more west-facing solar panels, then the operational peak could be deferred further, or even removed entirely. That could deliver major savings for grid operators, and grid costs, although it may not please incumbent generators who rely on the revenue from daytime demand.