Efforts to advance the development of solar cell technology that has the potential to beat silicon cells on cost has received nearly $900,000 in funding from the Australian Renewable Energy Agency (ARENA).

ARENA is providing up to $892,000 to support CSIRO to develop and apply guidelines for assessing the performance of perovskite solar cells at the ARENA supported PV Performance Laboratory in Newcastle. 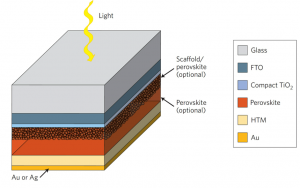 “If perovskite solar cell technology matures to commercialisation, it has the potential to provide cheaper power from the sun,” said ARENA CEO Ivor Frischknecht.

“Perovskite can be turned into solar PV cells with a less cost and labour intensive process than required with silicon,” he said.

Holding up the progress of the technology, however, is the fact that the international standards for measuring solar PV cell performance were established at a time when only silicon wafer cells were available.

“A standard approach to measuring the performance of new solar cell technologies will provide a level playing field for researchers and ensure that funding support is directed at the materials and fabrication processes with the greatest potential for success,” Frischknecht said.

“The (Newcastle) lab is the first and only in the Southern Hemisphere that is internationally accredited to measure solar PV cell performance and is already proving to be a valuable asset.

“This capability will allow Australian researchers to test perovskite samples on our shores instead of sending them overseas, speeding up research and reducing risk and costs.

The three-year, $2.4 million project is due for completion in November 2018.