Perovskites have taken the PV research world by storm in recent years thanks to unprecedented growth in efficiency in the material. Perovskite solar cell efficiencies have gone from a barely impressive 2.2% to a commercially significant 19.3% in less than 7 years – a rate of development simply unmatchable by other PV technologies. This article offers a glimpse into the world of perovskite solar cells and why they are a big deal.

Perovskite is actually the name of a naturally-occurring mineral discovered in the 19th century in the Ural Mountains. Although the material itself is rather unremarkable, it is the arrangement of atoms within its crystal that’s creating all the buzz. The perovskite mineral consists of a crystal in which 3 atoms (Calcium, Titanium and Oxygen) are arranged in a specific order that repeats itself. Today, perovskites refer to any material that has that particular crystalline structure (shown below). 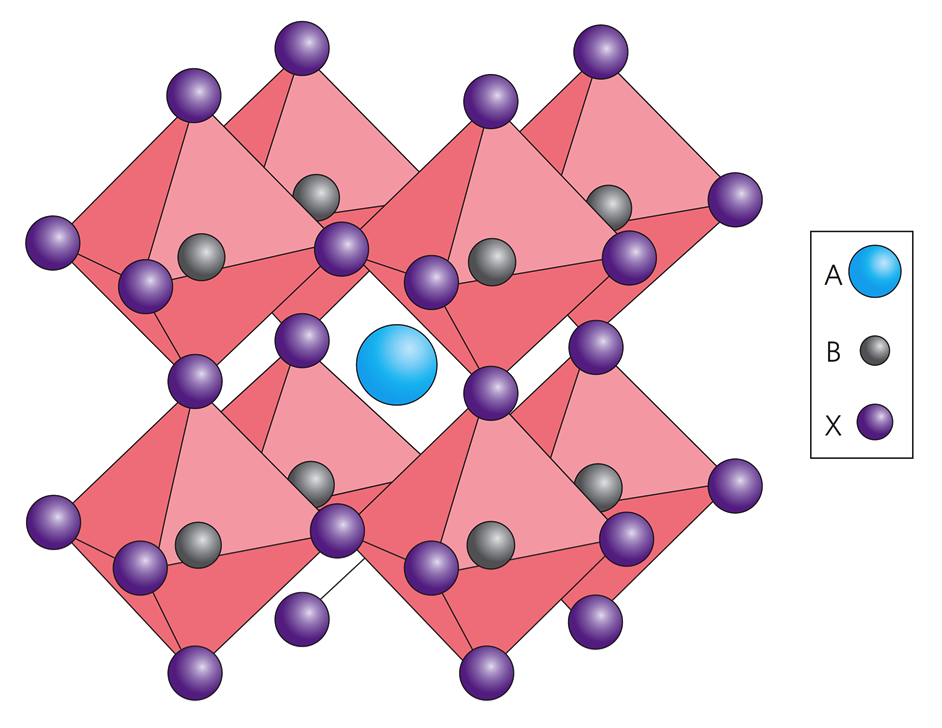 [Structure of a generic Perovskite crystal]

Scientists have discovered that by choosing the right materials for the components A, B and X in the figure above, it is possible to create a stable material with an amazing knack for converting light into electricity. In 2006, researchers in Japan used a mixture of organic and inorganic materials to create the world’s first reported perovskite solar cell with an efficiency of 2.2%. These early cells used liquid materials and were very similar in structure to Dye-Sensitized Solar Cells (DSSC) – a PV technology has so far failed to take off commercially but one that has been well studied over the years.

To turn the perovskite material into a solar cell, the material is simply deposited on top of a layer of tin-oxide, which itself sits on a glass substrate. An additional material (called a hole transport medium) is added on top of the perovskite before adding a metal contact (generally gold or silver). This resulting structure (shown below) is based on but is simpler than the DSSC cell structure of yesteryear. [Structure of a Perovskite solar cell]

With subsequent alterations to the materials as well as to the structure of the cell (making the perovskite material solid and the cell design simpler), efficiencies jumped within a short span of 6 years to 9.7% by 2012 and drew the attention of PV researchers, who have since taken to perovskites in a big way.

The interest is obvious – at the beginning of 2013, only 7 known reports on perovskite cells were available. By the end of 2013, perovskite-related scientific publications started appearing at a rate of 7 per month!

Huge leaps in cell efficiencies followed, with the latest confirmed efficiency of 17.9% achieved earlier this year and an unconfirmed efficiency of 19.3% achieved just a few months ago. This last result, if confirmed, would put perovskites at the same performance level as commercial silicon and thin-film based PV technologies. For a solar cell material practically unheard of 6 years ago, that’s pretty impressive.

The chart below shows the progress in efficiency over time for various related technologies. As the purple curve (perovskites) shows, perovskites have overtaken not only established technologies like a-Si (amorphous Silicon) and DSSC technology (which has undergone over 30 years of research) but also other emerging technologies such as organic PV (OPV). 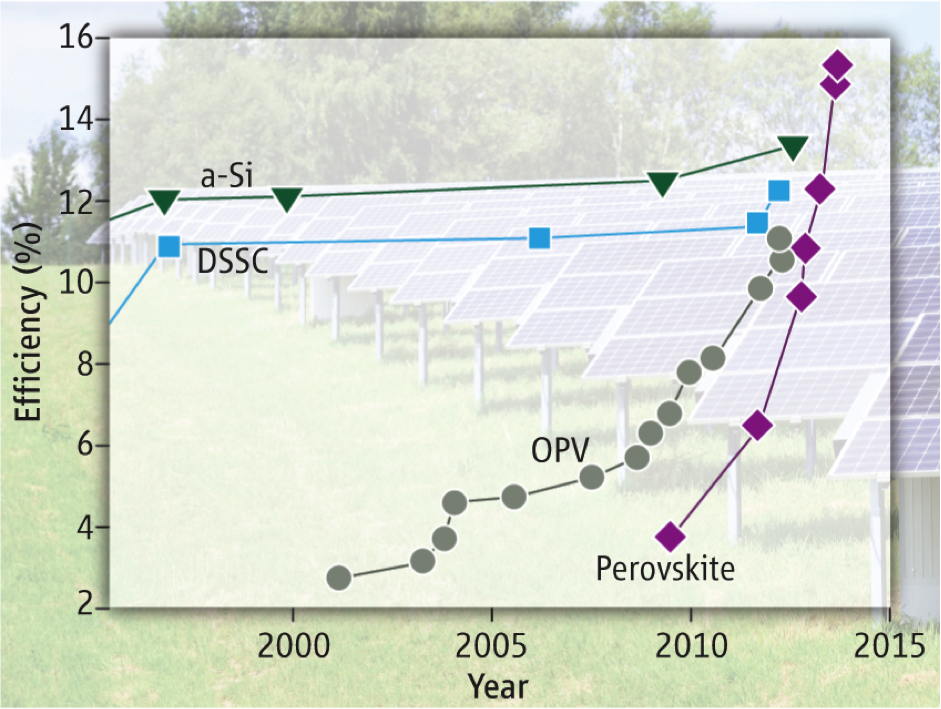 [Progress in research cell efficiencies over time for various technologies]

What makes Perovskites so fascinating?

Perovskites have a number of unique properties that make it a great material for solar cells. Perovskites inherently absorb more light than standard solar cell materials like silicon and thus have a higher theoretical limit of current that can be extracted from the material. And contrary to silicon, the spectrum of light absorbed by perovskites actually increases with temperature – ideal for outdoor usage. Moreover, once the absorbed light generates electrons within the Perovskite material, fewer of these electrons are lost thanks to uniquely low recombination mechanisms within the material. This has the impact of increasing both the current and voltage extractable from the device – important for achieving high efficiencies.

More interestingly for researchers, the properties of the material, including the range of the sun’s spectrum absorbed by the material, can be easily tweaked by changing the elements in the perovskite structure – something that isn’t possible to the same degree in silicon. This ability to change material properties has led researchers worldwide to flock to perovskites, each hoping to crack the right combination of materials and processes that will unlock the potential of perovskites.

In addition to making stand-alone cells, perovskites can also be combined with standard silicon solar cells to create multi-junction tandem cells that combine the best properties of two different cell technologies. This is the approach that Prof. Martin Green of the University of New South Wales is most interested in. In a recent public seminar, Prof. Green estimates that if the highest efficiency silicon solar cell (25%) is paired with the best-performing perovskite cell to date (19.3%) – something that’s practical today – the resulting tandem cell will have an efficiency close to 30%. This is well above the theoretical efficiency of silicon (29%) and is only 1% less efficient than the world’s record efficiency tandem-junction cell (31.1%)!

And while a majority of Perovskite cells are liquid-based devices where the perovskite material is spin-coated onto the cell, researchers at Oxford University in the UK have developed a way to deposit perovskites as a solid material using physical vapour deposition – the same technology used to make thin-film solar cells.

This means that the cost structure for perovskite solar cell manufacturing may be similar to that of thin-film technologies like Cadmium-telluride (CdTe). According to Prof. Martin Green of UNSW, perovskites are expected to be very easy to manufacture and will have very low cell-level material and processing costs. And like other thin-film technologies, improving the efficiency will be the primary driver for decreasing the cost of the technology. Given the remarkable efficiency improvements seen so far in perovskites, it’s easy to see the potential for future cost reductions with this material. Some analysts have projected costs as low as $0.10/W (compared to $0.70/W for silicon solar panels today).

While all this makes perovskites sound like the perfect material for the PV industry, the material has a number of quirks and drawbacks that will need to be addressed. Firstly, some of the highest efficiencies achieved have been possible only through the use of lead – an inexpensive, but toxic material. Efforts to substitute lead with tin, while promising, have generally resulted in less stable structures with lower efficiencies. Secondly, most perovskites have a property called ferroelectricity by which the current of the device depends on which direction the voltage is being swept (low to high or high to low). This makes it tricky to calculate efficiency, making it easy to overestimate.

More seriously, however, perovskite cells can degrade significantly when exposed to moisture and UV radiation – the sort of environments that modules in the field are expected to operate in. Some of the more recent perovskite cells were shown to degrade significantly within 20 days of moisture exposure without the use of any moisture barriers. Although this is not the final form in which these cells will be used – CIGS cells, for instance, also have similar issues and are often sandwiched in protective films and glass to provide durability – it will be require researchers to study and develop structures and encapsulation methods that will prolong the life of such panels to the range of 25 years, which is common for commercial modules.

Lastly, almost all devices created so far have been tiny – less than 1 cm2. For example, the highest confirmed efficiency of 17.9% was achieved on a cell of size 3mm x 3mm (0.09 cm2). Vapour deposition methods should make scaling up devices sizes easy in theory. However, this problem is far from solved.

Nevertheless, Prof. Henry Snaith of the University of Oxford remains positive that perovskite solar cells are only a few years away from commercialisation. His spin-off company, Oxford PV, hopes to capitalise on his novel and low-cost deposition technique to create commercial perovskite modules by 2016.

Says Snaith, “Our plan was to continuously optimise our perovskite solar cells towards a goal of more than 20% efficiency but these results are ahead of expectations. I see no reason why we can’t aim higher now and accelerate the transfer of our technology into production.”

Even if Snaith’s predictions are optimistic, it’s clear that nobody can afford to ignore Perovskites. The efficiencies are significant enough (close to 20%), the improvements in efficiency are coming at a staggeringly fast rate (~2% increase in efficiency per year), and the cost structure for the technology is lucrative. The plan forward is clear: work out the quirks and figure out how to make cells durable in the field, then commercialise the technology. And with all the buzz surrounding the topic, getting people to jump on the bandwagon will not been hard.