A new report by published by the Australian Renewable Energy Agency has predicted solar households will drive a mega-shift to energy storage in the country, as battery technology prices plunge by between 40-60 per cent in just five years.

The 130-page report prepared by AECOM says rapid uptake of energy storage over the next decade will be driven by demand – from both the supply side, as networks work to adapt to increasing distributed and renewable energy capacity, and from consumers wishing to store their solar energy – and by the rapidly changing economic proposition, with the costs of lithium-ion batteries set to fall by 60 per cent in less than five years, and by 40 per cent for flow batteries.

But it says the financial drivers for supply-side energy storage are “significantly weaker” than for demand-side applications; installation of battery storage by rooftop solar households keen to use as much of the energy their panels generate, rather than sending it to the grid for little to no financial benefit. 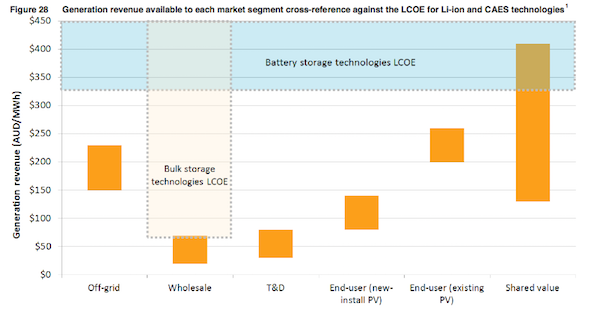 “PV can be coupled with storage to maximise usage behind-the-meter and ensure that PV generated during the day can be stored and used during the peak periods.

“This model is currently valuable for consumers because it reduces export of excess solar to the grid. Instead, the locally generated electricity can be used behind-the-meter, offsetting electricity purchased from the grid (which can be three to five times more expensive than standard export tariffs).”

Interestingly, the report uses the recent boom in residential solar PV as a “useful analogy” to what could occur in the energy storage market, as prices fall and technology improves.

“The behind-the-meter market segment of energy storage is widely expected to undergo a similar boom to the solar PV industry, with a tipping point expected within the next 10 years as further cost reductions are achieved,” the report says.

But the report stresses that the risks and opportunities of an energy storage boom would be more complex than for solar PV, due to the multitude of applications and value streams, greater safety risks, and the continued growth of rooftop solar.

At this stage, the main barriers to uptake of energy storage in Australia are listed as financial, technical and regulatory. Currently, the report notes, there are no subsidies or other incentives for wide-spread deployment of battery storage; as well as the uncertainty that has dogged the Australian clean energy and technology market under the Abbott government.

The report recommends ARENA continue to work with industry participants including technology suppliers, electricity networks and power retailers to prepare the market for a future boom, by supporting the demonstration and establishment of sustainable market structures and incentives.

“By supporting the development of an efficient market for energy storage, ARENA will facilitate additional supply of renewable energy by addressing intermittency and power quality challenges that could otherwise stall growth in the market,” it says.