Rooftop solar and solar hot water installs in Australia have passed the three million-mark, according to the latest data from the Clean Energy Regulator, as homes and businesses continue to take the power back against rising energy costs.

The CER said last Thursday that the new small-scale solar milestone had been boosted by a renewed boom in rooftop solar installs that meant one in five Australian households were now generating at least some of their own power.

All put together, it said, the millions of small-scale solar systems had the combined capacity to generate – or in the case of solar hot water, to displace – around 12.9 million megawatt-hours of electricity a year.

“This is another milestone demonstrating Australians are making the most of the Small-scale Renewable Energy Scheme to access clean, renewable energy systems,” said CER executive general manager Mark Williamson. 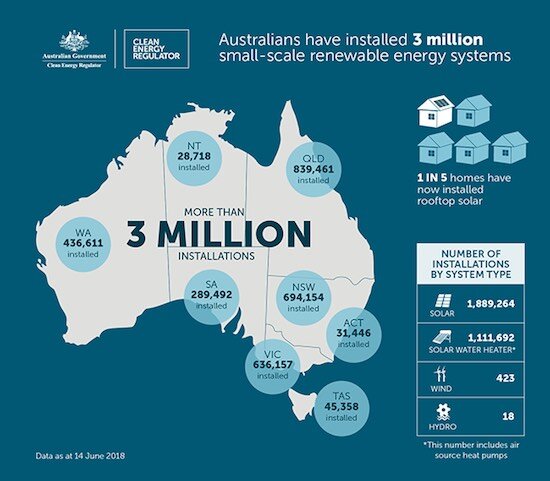 “One in five Australian homes now generate their own renewable energy and reduce carbon emissions through rooftop solar,” he said.

The CER said that the majority of the more than three million SRES installations – around 63 per cent – were rooftop solar systems, while the remainder was made up of solar hot water (29%) and heat pumps (8 per cent).

“Over the past few years we have seen a trend of larger systems being installed as technology advances and prices fall,” Mr Williamson said.

“These larger systems are not just being installed by households. More schools, community groups and businesses are installing systems and seeing the financial and environmental benefits of renewable energy.”