It is touted as the first solar PV plant in Europe to operate at 110kV high-voltage levels, as opposed to the low- or medium-voltage networks solar farms are commonly associated with.

The lead acid batteries provide electricity in response to the sharp fluctuations in grid supply, maintaining its frequency and voltage. This function is generally billed separately from the power traded on the national electricity market and is paid for through network operation fees.

The battery units have the inherent advantage of having a very quick response time – in the time scale of seconds as opposed to minutes – by eliminating the start-up and ramp-down operations of more standard quick-response combustion generators. This capability is crucial for effective response to variability in supply.

The EBUs are not intended to supply PV electricity produced during the day for use during the night and contrasts to other large-scale grid-connected battery storage options that have arisen in recent times. 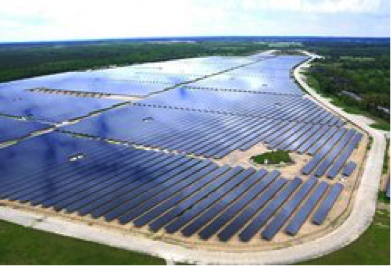 Although the German installation was reliant on subsidies in order to be commercially viable, Belectric believes that this model is already competitive without government assistance under the right conditions, for example with an inexpensive grid connection.

This is truly a unique application for solar and batteries, one that has not received a lot of media attention but may well be a crucial example of how renewables and batteries can do it better. The EBUs are competing directly with conventional combustion generators and have a significant advantage in response times which gas plants simply cannot compete with.

This significant development brings us one step closer towards displacing fossil fuels and transitioning towards low carbon economies.