Owners of an 180MW coal fired power station in Northern Queensland are looking to convert the ageing facility into a ‘clean energy park’. Using a combination of solar PV, thermal installation and a gas fired booster, the redevelopment will deliver a base load of 50MW, details of the redevelopment were revealed by Ratch Australia, the plants owner, and confirms a 20MW solar array will be installed as part of the project after previous speculation about the exact make-up of the clean energy site.

The transformation of the coal fired plant into a clean energy plant marks an important step for commercial solar developments in the sunshine state, however, the new plan for the site falls far short of the original 150MW solar thermal project developed as part of the now defunct Solar Flagships program. The funds allocated to the Solar Flagship program have been transferred to the Australian Renewable Energy Agency. Under the agency’s ‘Emerging Renewables Program’ Ratch Australia has been awarded $2.5 million in the form of a research grant, they will be investigating the extent to which ageing coal-fired turbines could be re-purposed as solar hybrid plants. 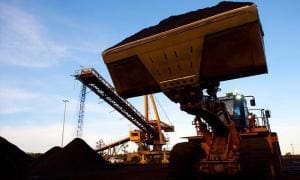 Excavators at the Collinsville plant

Ratch has set aside two separate areas for the solar PV and solar thermal components of the project, both of which take advantage of existing grid connections at the site. During the pre-feasibility study, which was was completed a year ago, the cost of solar PV and solar thermal was about the same, but due to various factors operating within the photovoltaics industry, the cost of solar PV has fallen dramatically, currently sitting around $120-$150 per MW. The solar thermal component of the project is significantly more expensive, but it is hoped to bring the development in at under $200 per MW.

The solar thermal hybrid project is estimated to take nearly 2 years, with completion of the project expected in February 2015, while the solar PV array will be installed and operated separately until this time. When Announcing the grant, Federal Resources and Energy Minister, Martin Ferguson, highlighted the benefits of the research in deploying concentrated solar thermal in Australia.

“Such information will include the overall technical feasibility of converting thermal coal fired power stations to solar thermal plants, its costs, the solar yield, network connection and other issues”

Ferguson also announced funding for other solar research projects. Ipsos Social Research Institute will receive $153,388 to investigate the social licence to operate for utility-scale solar installations, including levels of community awareness and attitudes towards large-scale solar installations. The Monica Oliphant Research Institute with receive funding to model community-owned solar projects. Those residential home owners in multiple property buildings, frustrated at the difficult of getting solar projects past building management committees, will be interested in the finding of the research. Outcomes will include information on how renters, low income earners, or those who live in houses that aren’t suitable for solar photovoltaic panels can be involved in renewable energy projects..

Rebecca is a sustainable development and marketing graduate, with a background in community engagement and research. She has a particular interest in sustainable resource use.