The situation in Australia’s electricity sector have come to what might be described as perfect storm conditions for leaving the grid, and unfair & inefficient pricing mechanisms are largely to blame, according to a report by the Grattan Institute. The report, Fair pricing for power (pdf), provides a sober assessment of the state of retail electricity pricing in Australia, doing much along the way to clear the name of the green schemes that have been scapegoated and vilified by the current government as the primary reason for the price rises of recent years. 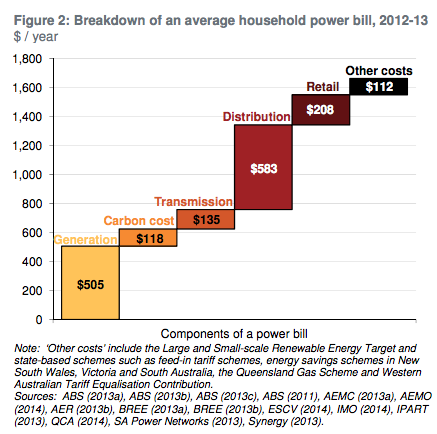 The average home’s power bill rose 70% between 2012 and 2013, the report says. But due to the existing pricing structures–in most cases a flat, per-kWh rate plus a daily network fee–the rises are spread evenly instead of equitably. Some customers, Grattan estimates, are paying as much as $150 more than they need to, and in doing so are effectively cross-subsidising other electricity consumers. These unfair pricing structures also have the inadvertent side-effect of failing to discourage the behavioural patterns that lead to the need for more network investment–which in turn drives up electricity prices. 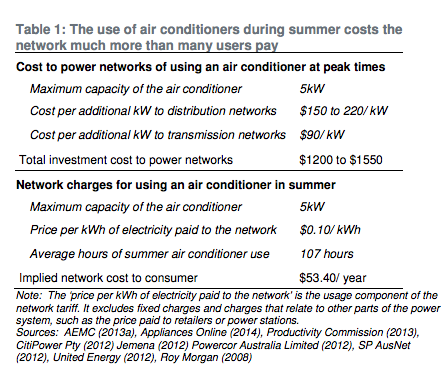 The key difference between the two types of electricity consumers (the cross-subsidisers and the cross-subsidised) is not so much the amount of power that they use, but when they use it. Network companies invest in infrastructure to meet peak demand in order to ensure that blackouts don’t happen, but at this point there is no disincentive for ordinary electricity consumers on a flat-rate tariff to use electricity during a peaking event. The $/kWh rate that they pay will be no different if they use it when the grid is nearly at its limit on a hot summer afternoon with everyone’s AC units cranking–or if they use it at 2am when virtually no one else is consuming electricity. All of this in spite of the fact that those who put more strain on the network by using more capacity have a greater responsibility with regard to power bill increases for all grid-connected electricity users.

This approach, says Grattan, made sense back when accumulation meters were the only technology available for measuring electricity usage. But more modern technologies are now available to keep track of what matters more: peak usage. Smart meters should be deployed and utilised on a broad scale, and tariff structures should be changed to take advantage of the full range of their capabilities–including their ability to measure instantaneous usage in kilowatts–in order to address peak demand. Interval meters, which keep track of usage in half-hour chunks, could also be used to a similar end, although the range of capabilities is not as broad as with smart meters.

Widespread deployment of advanced meters would be integral for a decoupling of network costs and consumption costs, which the Grattan Institute says would enable more equitable billing. Specifically, the report recommends 3 changes to the current tariff system:

These changes, if implemented, would rein in the rampant network spending and associated power price hikes that Australia has witnessed in recent years, Grattan argues. This is because households (which contribute substantially to peak demand) would have the economic incentive–currently absent–to ensure they are not using more devices than necessary at any given time, thereby reducing overall load on the network. Similarly, ‘Critical Peak’ tariffs would be announced as necessary on an emergency basis during extreme peak events; those who do not curb their usage within a certain threshold during the prescribed timeframe will pay significantly more. (Matthew Wright of Beyond Zero Emissions counters that while a step in the right direction, Grattan’s suggested reforms still do not get to the root of the problem.)

The Grattan Insitute’s suggested reforms to the tariff system would have major implications for the rapidly changing electricity market in Australia. Australian households and businesses are already turning to rooftop solar PV systems and energy efficiency upgrades to deflate their ballooning power bills, and electricity demand is sagging across the nation because of it. Taking advantage of demand-based tariffs, if introduced, would be another weapon in the arsenal for those who are conscientious about their electricity usage (as all solar owner should be).

Top image via the Grattan Insitute