Australia would need to switch to 100 per cent renewable electricity generation by 2050 in order to achieve the kind of rapid decarbonisation required to meet its global climate obligations, a new report has found.

The report – a preliminary draft of the Deep Decarbonization Pathways Project, a collaborative effort by researchers from 15 of the world’s heaviest emitting countries – maps pathways for these countries to meet the internationally agreed target of limiting global warming to less than 2°C.

For Australia, whose fossil-fuel dominated electricity mix accounts for two-thirds of the country’s greenhouse gases, this will mean cutting emissions “by an order of magnitude” by 2050 – a shift that, in turn, will require fundamental changes to the nation’s energy system. But the good news, according to the report, is that this is all very doable for Australia – and would be a boon for the economy, too.

This is possible, says the report, through the inclusion of both flexible and variable renewable energy technologies as well as advances in energy storage technologies, which would also be widely used in the transport sector.

The remaining electricity demand is met by distributed supply, mostly from renewable energy generation with one quarter (or 4% of total demand) supplied by on-site gas fired electricity generation in remote (non-grid integrated) areas.

And far from having the economy-wrecking effect the Abbott government has warned would accompany any rapid shift to renewables, the results from the report’s illustrative pathway show that between now and 2050, Australia’s real GDP grows at 2.4 per cent per year on average, resulting in an economy nearly 150 per cent larger than today.

Productivity also keeps rising, with 43 per cent growth in real wages and exports growing at 3.5 per cent per annum.

By 2050, the report notes, electrification across all sectors would drive a two and one-half fold increase in electricity demand. But the change in the generation mix would lead to a greater than 95 per cent reduction in the emissions intensity of electricity to just 0.021tCO2/MWh. 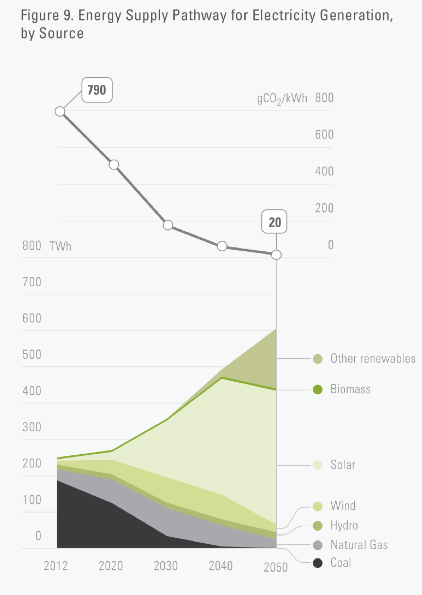 “Government has a vital role to play in providing predictability of policy settings in order to minimize investment hold-ups and to reduce the risk of suboptimal investment decisions.”