The solar industry in Australia has not been without its share of political & policy calamities. Government policy–especially on the state level–must appear to both those inside and outside the country as erratic and whatever the antonym for even-handed is.

Here, solar feed-in tariff incentives have all been state-based programs. They were largely what propelled solar PV installation uptake in each state–and into the public consciousness as a way to save money. Feed-in tariffs rewarded homes & businesses (mainly homes) for producing solar power themselves and sending at least a portion of that power into the grid. Meanwhile, the federal Renewable Energy Target worked on the other end, helping to reduce solar PV installation prices nation-wide. This combination of incentive schemes has characterised the development of the Australian solar scene, and allowed the country to be a world leader in uptake of small-scale, residential solar systems.

NSW was the first to close down its FiT scheme, replacing it with what nothing. Somehow, all Australian states seem to have followed NSW’s lead, replacing their once generous feed-in tariffs with either a market-based feed-in tariff rate (read as: no incentive at all without shopping around) or a mandatory minimum rate whose value is nominally ‘fair and reasonable’ but which is in some cases as low as 1/4 the price of retail electricity. The argument for this arrangement, it was determined time and time again, was in effect that exported solar power has virtually no value to a utility. As one Solar Choice commenter (whose voice is certainly not alone) has pointed out, utilities are in effect buying exported solar at a rate of about 8c/kWh and selling it to the system owner’s neighbour for 24c/kWh or more. The absurdity is hard to overlook.

While in Australia it is the RET that is currently embattled, in the US the solar lobby is taking on utilities with the aim of protecting the ‘net metering’ arrangements that are in place in most states–a battle already lost in Australia. In the US, net metering is an arrangement wherein a home or business with a solar system is rewarded for exporting their solar power to the grid at a rate equivalent to what they pay when they purchase from the grid (in Australia this is sometimes called a ‘1-for-1 feed-in tariff‘ or ‘solar buyback’). The US solar industry has had a series of victories on this front so far, including in a big one in Arizona, whose solar resources are hard to question. For the most part, net metering looks as if it will remain a part of the landscape elsewhere as well. But it is humble Minnesota that has come out with what is quite possibly the most innovative approach to rewarding homes and businesses for their excess solar power.

The review that Minnesota has undertaken with regard to solar is in essence very similar to the ones undertaken by Australian states: they asked what the ‘real value’ of exported solar power is. But the results are much more forward-thinking and arguably much fairer than anything that’s come out of Australia thus far. It is also innovative in that it gives the cohort of Minnesotan solar system owners a collective voice & recognition of (and proper compensation for) the contribution that they are making to the state’s electricity infrastructure by investing their money in solar plants.

How does the Minnesota system work? Unlike the short-sighted view that Australian utilities seem to have universally taken on the topic of valuing solar, Minnesota took into account most of the things that were explicitly excluded in Australian reviews. As opposed to being valued simply for its wholesale cost (similar to ‘avoided fuel cost’ in the chart below), in Minnesota Value of Solar calculations will also include the costs of: avoided distribution capacity, avoided transmission capacity, avoided reserve capacity, avoided generation capacity, as well as fixed and variable O&M for plants that would have had to be built for if the solar weren’t there. The determination of these values may seem arbitrary and subjective (and doubtless are to some degree), but as long as the calculation methodologies are transparent and consistent, Minnesota could is certainly on to something big. 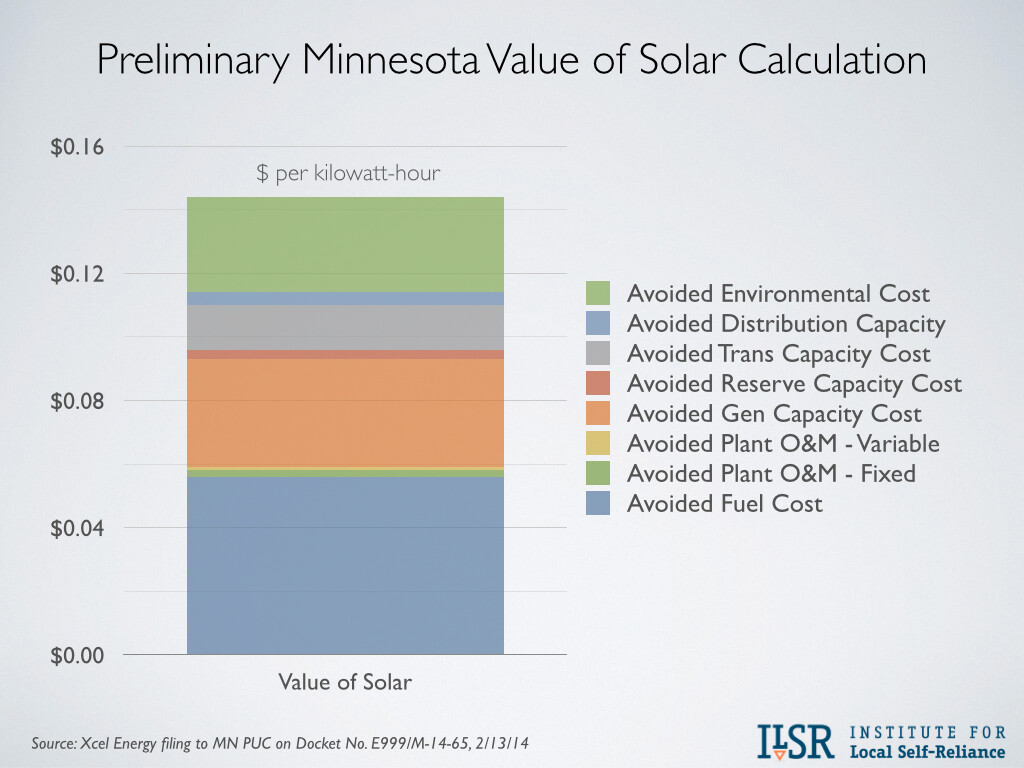 Summed up, the total Value of Solar works out to a rate that is independent of the retail value of electricity, but ends up being similar. In the first few years, the Value will probably be higher than the retail electricity rate, meaning that solar homes & businesses will save more money by exporting their solar power than by self-consuming it—the inverse of what is true for solar system owners in Australia. Over time, however, as more infrastructure comes into place, the VoS will drop, meaning utilities will not have to shell out as much in bill credits after 5 years. Meanwhile, they benefit from certainty in knowing what they will be paying for each kWh of solar electricity that they purchase and have a diminished need to invest in more infrastructure themselves. As the Institute for Local Self-Reliance (ILSR)’s John Farrell, who has commented extensively on this topic, points out, ‘Everybody wins’ with Minnesota’s new scheme.

Some (including ILSR) have described distributed solar generation as a ‘democratisation of the grid’ & electricity market. It will be interesting to see how Minnesota’s experiment works out in the coming years. If and when it proves itself to be an effective mechanism that promotes the uptake of solar with a proposition that is quite clearly a fair one, why shouldn’t Australian utilities (and consumer protection & competition-focused governmental bodies like NSW’s IPART and Queensland’s QCA) consider implementing a similar approach to replace the current approach, which practically punishes solar system owners for feeding their power into the grid?

Another Solar Choice reader also commented recently that it would be a great experiment for every solar system owner in the country to set a time & date to turn off their systems and see what the impact would be. Would the grid fall into chaos? Would there be problems meeting peak demand and more blackouts on hot days? If so, maybe then the contribution that the ‘people’s power plant’ is making would be acknowledge and its value reassessed. In Minnesota, it seems that the climate is such that there was no need to stage this sort of stunt.

Top image by Ravedave via Wikipedia