Continued uncertainty over the future of Australia’s Renewable Energy Target has boosted the nation’s uptake of rooftop solar, according to a new report, helping to push the total amount installed since July 2013 to 1GW.

Data released by Green Energy Trading shows that more than 1,020MW of rooftop solar was installed across the country over the past 14 months, with Queensland the biggest market, followed by Victoria, NSW and South Australia.

NSW and SA were the biggest installers of commercial-scale rooftop solar, which, thanks to low export tariffs, businesses are using to reduce their consumption from the grid as much as possible by consuming most of the output of their systems.

The data included installations under the SRES, or small scale part of the RET, only. Larger systems of more than 100kW come under the large-scale RET. 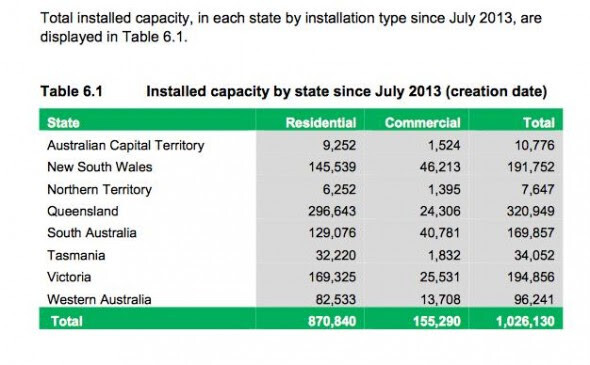 In its report, Green Energy Trading said it now expected 785MW of rooftop solar would be installed in calendar 2014 –  a 7.5 per cent upgrade on its previous forecast – via 181,000 solar PV systems installed across the country at an average size of 4.35 per cent.

The report said the upgrade was based on a recent surge in interest, probably caused by fears that the upfront incentives – in the form of certificates – would be removed or wound back.

According to Green Energy Trading, some 47,100 rooftop solar PV systems were installed in the September quarter, an increase of 5 per cent that was likely driven by fears that the subsidy could soon end.