A new class of inexpensive, organic (non-metal) materials has been reported by researchers at Harvard University that has the potential to dramatically reduce the cost of flow batteries for energy storage applications.

As covered in our recent article, an affordable energy storage technology could unlock the full benefits that solar and wind power have to offer by storing the excess power produced (for example, during the day by a PV system) until a more suitable time when power production is low (for example, at night when no PV power is produced). However, common such applications require deep-cycle batteries of the kind typically used in mobile phones and electric cars, not the more abundant and cheaper ‘starter’ batteries used in cars.

One such deep-cycle battery technology is the flow battery, where two different charge-containing liquid electrolytes are used to generate electricity. An important difference between flow batteries and solid battery technologies such as the Li-ion battery is that the energy generating mechanism of the battery is separated from the charge source, the electrolytes, which can be stored externally as opposed to being contained within the battery. This allows the size of the batteries to be scaled up very easily, making it an ideal fit for energy storage.

Although the liquid electrolytes translate to a lower energy density, the batteries have a longer life and interestingly for electric cars, can be recharged very quickly simply by draining the spent electrolyte and filling the storage tanks with the charged electrolyte – much like how you would fill petrol in your car.

Flow batteries typically use vanadium based electrolytes, which were pioneered here in Australia by researchers at the University of New South Wales. Although such metal-based electrolytes produce higher voltages, they are expensive and not very abundant. “The amount of vanadium that’s mined and refined over 1 year is sufficient only to store about an estimated .01 or .02 percent of the electrical energy that we’d like to store to make renewable energy useful,” says Harvard chemist, Roy Gordon.

In comparison, the electrolyte developed by the Harvard team led by Professor of Materials and Energy Technologies, Dr. Michael Aziz, are based on a family of abundant, non-metal materials called quinones, which are already a third of the cost of vanadium-based electrolytes and are expected to become cheaper with scale. 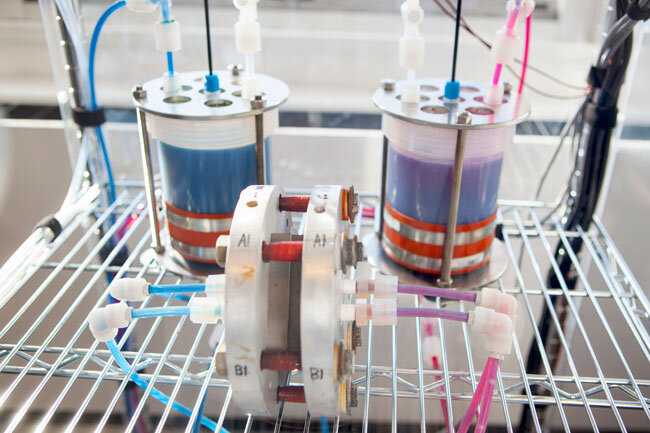 Promising higher energy densities and further optimisation of the quinone-based materials, Professor Aziz says, “The options for metal ions were pretty well worked through. We have now introduced a vast new set of materials”. His team has already evaluated over 10,000 variants of the molecule, selecting ones that have desirable properties such as high voltage output, the ability to be dissolved in water for easy storage, and the ability to withstand multiple cycles of charging and discharging.

The researchers expect good durability from the quinone-based electrolytes; however, reliability and long life-times of 15-20 years will need to be successfully demonstrated for the technology to be a serious contender. The total battery cost is also currently unknown, raising questions about the true cost of the whole battery system. As a target, the US Department of Energy suggests that battery costs need to be in the range of USD $100/kWh to be economical for energy storage purposes.

In an effort to find the answers to such questions, Prof. Aziz has gone beyond the laboratory, partnering with an energy startup named Sustainable Innovations. Together, the team aims to develop a large-sized battery for solar power storage in commercial buildings.

The development comes at a time of increasing research interest in battery technologies as well as a bloom in high-profile battery tech start-ups.