Rooftop solar is now accounting for around 7.4 per cent of total electricity demand in Queensland’s south-east corner, including Brisbane and the Gold Coast and Sunshine Coast.

The figure is a mixture of metered output and a “guesstimate” of how much solar is being “self consumed” by solar households.

The local network operator Energex estimates that its more than 1,000MW of rooftop generates 1,690GWh a year, around 7.4 per cent of the total 22,850GWh on its grid. 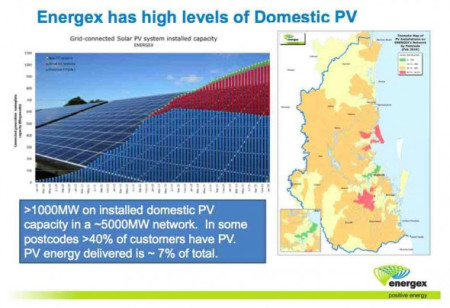 In some areas of the network, more than 40 per cent of customers have rooftop solar PV. Those areas are marked in red on the map to the right. Orange indicates between 30 and 40 per cent, and green indicates less than 15 per cent.

In the whole of Queensland, including the Ergon network, rooftop solar now accounts for 1.45GW, making it the second biggest power station by capacity in the state. The Labor government plans to double that capacity by 2020.