A new study from the Rocky Mountain Institute finds that parity for rooftop solar and energy storage is closer than anyone thinks – in fact for some states in the US it either already exists or will exist in the next few years.

The RMI released a new report, The Economics of Grid Defection: When and where distributed solar generation plus storage competes with traditional utility service, which canvasses a range of scenarios depending on the cost gains of solar-plus-battery storage systems.

For years, it says, such systems were seen as a “distant possibility at best, a fringe technology not likely to be a threat to mainstream electricity delivery any time soon.”

That was mostly due to battery costs. But the new reality is that affordable battery storage is coming much sooner than most people realize. “That approaching day of cheaper battery storage, when combined with solar PV, has the potential to fundamentally alter the electricity landscape.”

The report shows that solar-plus-battery grid parity already exists in Hawaii for commercial customers, and will rapidly expand to reach residential customers as early as 2022.

More amazingly, grid parity will reach millions of additional residential and commercial customers in places like New York and Los Angeles in California within a decade.

“Even before total grid defection becomes widely economic, utilities will see solar-plus-battery systems eat into their revenues,” the report notes.

“Factors such as customer desires for increased power reliability and low-carbon electricity generation are driving early adopters ahead of grid parity, including those installing smaller grid-dependent solar-plus-battery systems to help reduce demand charges, provide backup power, and yield other benefits.

Tables below via Rocky Mountain Institute. (Click to enlarge.) 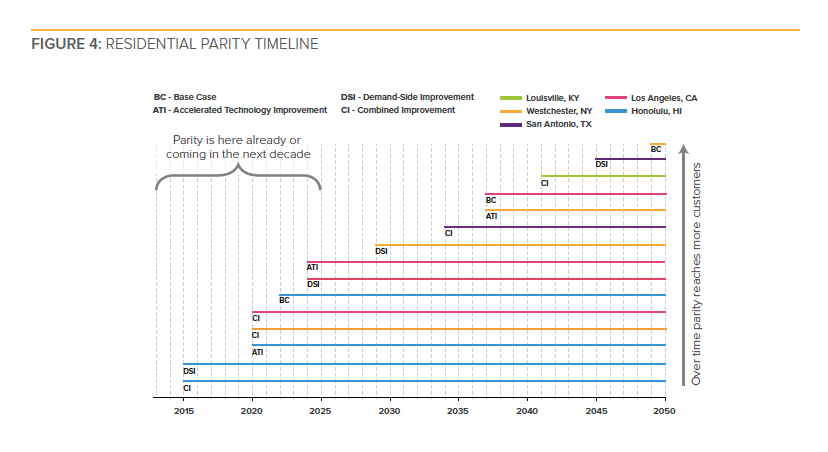 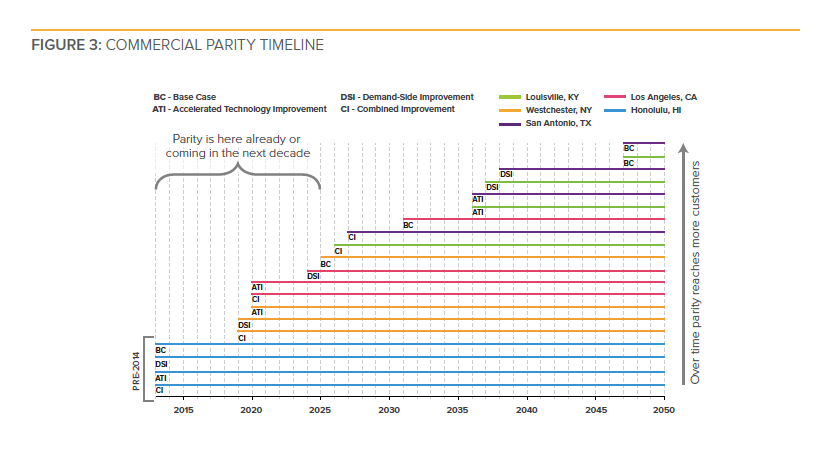