Driven mainly by increased uptake of solar PV systems, the US commercial energy storage market is ripe to grow from 120 megawatts (MW) in 2014 to around 720MW by 2020–an increase of about 500%–according to a new report by GTM research. GTM’s report, Distributed Energy Storage 2014: Applications and Opportunities for Commercial Energy, sees significant room for growth in the sector as more and more US businesses look for ways to save money on power bills and take advantage of incentives on offer through the federal and state governments.

The projected growth in the energy storage market is attributed to falling technology prices as well as the emerging challenges and opportunities brought about by country’s solar boom of recent years. Small, medium and even large-scale rooftop solar PV installations have been the first step in the distributed energy revolution: as solar systems have become more accessible, more and more households and businesses have achieved higher degrees of energy independence.

Energy storage is widely seen as the next logical stage of this dramatic transformation of how electricity is generated and distributed in the industrialised world. Not only does it further improve energy independence and insulate consumers against price shocks associated with fuel price volatility, but it also offers answers as to how to deal with some of the challenges associated with distributed solar for utilities. Namely, energy storage could help to ‘smooth’ solar system output during times of inclement weather, particularly when partially cloudy skies can result in output ‘spiking’ as clouds pass between arrays and the sun.

The report is just one of a number that have emerged recently that present an optimistic view on the prospects of energy storage. There has been no shortage of reporting on the topic of the dawn of energy storage in recent months, with a number of analysts convinced that 2014 will be the pivotal year for it to enter the mainstream.

Unsurprisingly, however, many of them differ exactly how things will eventuate. Lux Research, for example, while optimistic as GTM is about the fact that the industry will grow, differed substantially in how it saw this growth unfolding over the next few years. Anticipating the residential segment to see the most expansion globally out to 2018, Lux expected just under 300MW of light and heavy commercial/industrial energy storage installed around the world by 2018, compared to GTM’s prediction of nearly 430MW by then in the US alone (as per the graph below). 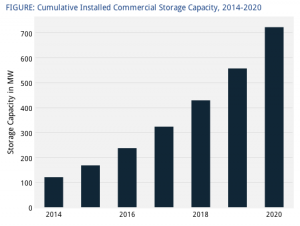 Shayle Kann, Senior Vice President of GTM Research, said “The commercial energy storage market is still in its earliest days, but we’re starting to see real opportunity emerge for companies that can selectively pursue attractive markets and successfully monetize multiple value streams. … Growth in early markets such as California and PJM will be vital in helping the market scale and getting investors comfortable with the complexity of financing energy storage in the U.S.”