A new report by the CSIRO has flagged the importance of engaging consumers in the transformation of Australia’s electricity market – a shift to distributed energy that is largely being wrought by the unstoppable uptake of solar and storage.

The global shift to decentralised and renewables heavy energy systems is likely to see a big change in the way tariffs are structured – hopefully for the better, rather than the worse – but it may just mean another level of complexity for consumers in what is already a thoroughly opaque market.

According to the CSIRO, “meaningful demand-side participation” – which is code for using solar and storage to help manage the grid, such as surges in peak demand – by consumers will be critical to optimising Australia’s future decentralised, distributed electricity systems and stabilising costs.

But as this same report also notes, inspiring millions of electricity consumers to “make a substantial and enduring mass shift in electricity usage that flattens peak demand” will be no easy task.

And when the key to effecting this mass shift – according to most industry stakeholders – is to get customers to actively uptake cost-reflective or time-of-use energy pricing, and to make the most of it using solar and storage – the task starts to look nigh on impossible. 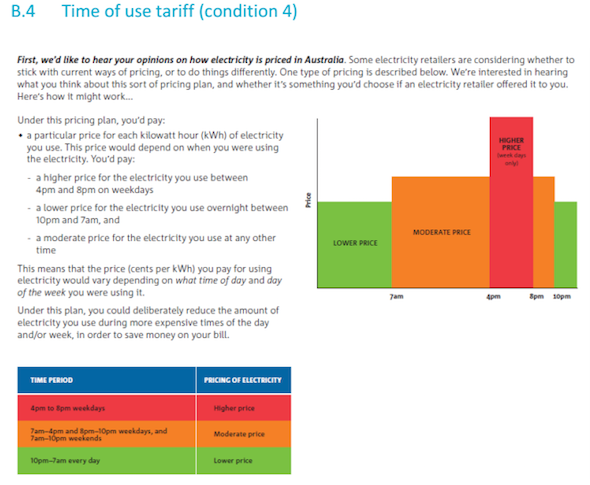 “Taking into account those who will never even respond to such a tariff offer, our calculations suggest that the initial voluntary uptake of cost-reflective pricing is unlikely to exceed 5-10% of households,” the report finds.

The reason for this, it says, turns out to be pretty simple: consumers have an aversion to making any kind of choice, or to giving up the status quo – a problem, says the report, which is only magnified as the decision-making environment grows more complex.

And of, course, this consumer inertia is pretty convenient for the utilities. As long as consumers seem unmotivated to change their energy habits, the pressure is off to change the way energy is delivered.

While 1.2 million Australian households have cared enough about rising energy costs – and perhaps the source of their electricity – to install rooftop solar, the CSIRO report suggests that is where energy saving begins and ends, for many.

The survey found that homeowners were more likely to invest in once-off energy efficiency measures and expensive home improvements to save energy – including solar installations – than to change their consumption habits.

Some of homeowners said they happy just to “keep the current way as we are going solar soon and hopefully get off the grid altogether” – in which case the issue of electricity pricing, cost-reflective or otherwise, was moot.

So what is the answer?

“A substantial and enduring mass shift in electricity usage that flattens peak demand seems to require not just isolated tariff reform, but rather tariff reform accompanied by systemic technological changes, especially around automation of usage,” the report says.

“We conclude that in all policy making around cost-reflective pricing it will be absolutely critical to distinguish what might promote uptake as opposed to effective usage of cost-reflective pricing, and to recognise that anything that induces the former without also facilitating the latter might entail considerable political, economic and social risks.”