Skip to content
A group of leading Australian climate scientists, academics and former heads of energy companies have slapped down the federal government for its continued claims that Australia is pulling its weight on climate action, and on track to meet its international obligations.
The group of 28 released a joint statement on Monday reminding those who need it that Australia is not on track to meet its 2030 emissions reduction target, and that said target is woefully inadequate for what science says must be done to avert dangerous global warming. 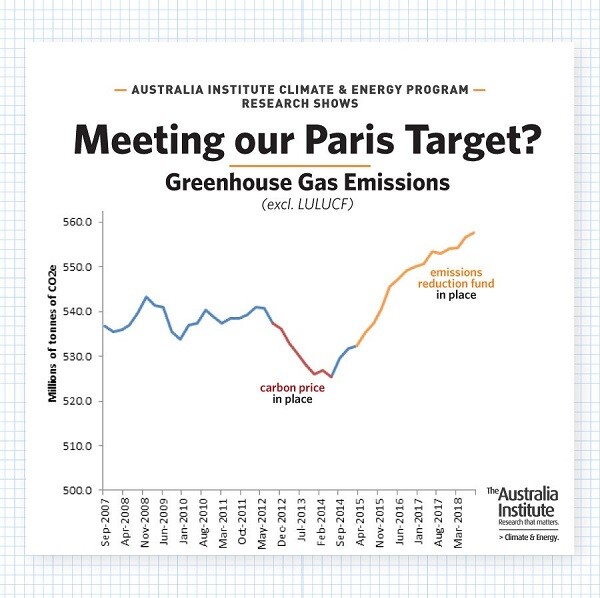 It also notes that, contrary to the repeated claims of Australia’s energy minister, Australia’s greenhouse gas emissions are not going down, but rather have been rising for four years in a row, ever since the scrapping of the carbon price.

“It is unbelievably misleading,” said signatory and Climate Councillor Greg Bourne on ABC Radio on Monday morning. “Anyone who goes into the data sets, and they’re really quite easy to look at, with some very nice graphs, show emissions rising ever since, basically, the Abbott government came in.”

Proud to be a signatory to this statement from @climatecouncil. Between us, we have devoted 600 years to this issue.

Last week’s announcements are not enough to get us to meet our lousy Paris Target. That target, by the way, isn’t even nearly enough to ensure a safe climate. pic.twitter.com/rVT0TmLA8Y

Instead, data shows that direct combustion, transport and fugitives have all increased greenhouse gas pollution levels since 2005 and are projected to continue increasing out to 2030.

“The electricity sector has been going down… but the overall energy sector, if you take energy as a package, energy emissions for Australia have been going up continuously,” said Bourne, who is also the former CEO of the Australian Renewable Energy Agency.

“It’s almost as if, if the politicians can get us to concentrate on the electricity sector, which has shown some downward slope, then we’ll forget all about the rest.”

“We won’t be meeting out #ParisTargets by reducing emissions, we’ll be relying on dodgy credits that we got through accounting tricks from 10 years ago,” says @RichieMerzian Director of @TheAusInstitute Climate & Energy Program, on @SkyNewsAust #auspol pic.twitter.com/IbzTa0pTVG