German battery system maker sonnen has launched its ground-breaking sonnenFlat package – a retail electricity offer available to anyone with at least a 5kW solar system and a sonnen battery system with a minimum of 8kWh of capacity. sonnenFlat customers pay only a single monthly fee (starting at $30) to sonnen instead of having a conventional electricity bill – a proposal that is sure to be attractive to Australian electricity consumers facing yet another round of price hikes from this month.

In this article we take a look at the sonnenFlat offer in an effort to determine how it stacks up against a) doing nothing and b) going solar, or c) going with another solar & battery system without a custom-made electricity plan.

Compare quotes from solar & battery providers in your area

The company is the first hardware & software provider to move into the retail electricity space in Australia, putting it in a unique position to bring otherwise untapped value to those who purchase its home battery systems. With ample experience under its belt from years of successes in the European and US markets, sonnen is confident that it can deliver its stated aim of ‘clean and affordable energy for all’ to Australians as well – while upsetting the status quo and solving the energy crisis in the process.

With sonnenFlat, the company combines all of the benefits and opportunities associated with distributed battery storage (e.g. solar self-consumption, energy self-sufficiency, demand response, peer to peer trading, virtual power plant functionality, frequency regulation, etc) and uses smart software to bring solutions to both households and the various segments of the electricity sector alike. sonnen already supplies 75,000 people in Germany with electricity through the sonnenFlat programme, which has been in place there since early 2016.

Philipp Schroeder, managing director of sonnen, at the sonnenFlat launch on 5 July 2017.

There are three primary criteria for someone to sign up for the sonnenFlat program. You must:

Under sonnenFlat, all the electricity you consume is ‘free’ regardless of the source (solar, battery or grid), provided that you don’t use more than a prescribed amount of electricity per year (7,500kWh – or about 20kWh per day – being the ‘starter’ package). Any energy consumed in excess of this amount will be charged at a rate that is not yet clear to Solar Choice. While it’s not really ‘all you can eat’ electricity, the company says that they have endeavoured to ensure that systems are sized appropriately so that households on their sonnenFlat plans do not need to worry about being ‘stung’ with overage charges.

There are three available sonnenFlat packages, each of which requires a different minimum solar & battery system size: 5kW solar / 8kWh battery, 7.5kW solar / 10kWh battery, or 10kW solar / 12kWh battery (as per the table below). 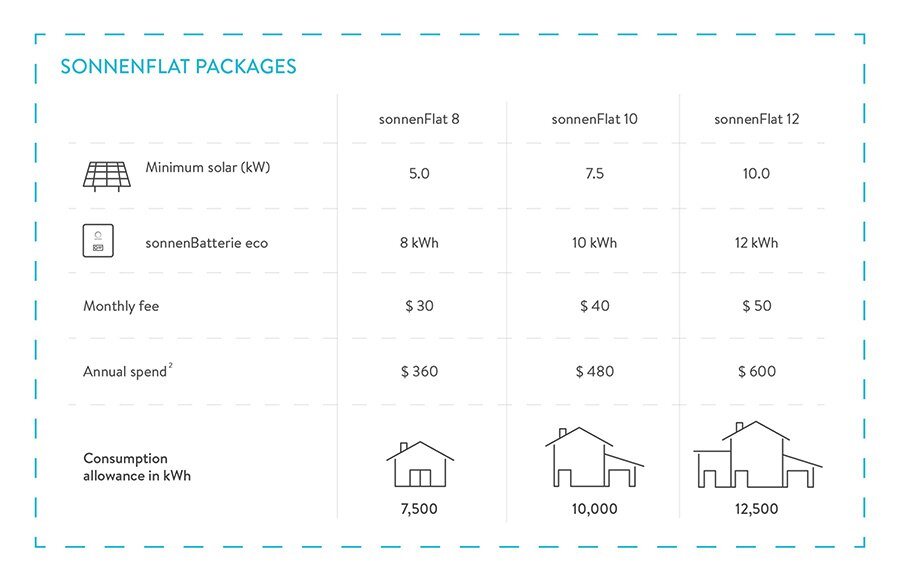 Under a sonnenFlat plan, the customer essentially gives control of their solar & battery system’s daily operation to sonnen, who use it to either supply the customer with energy or sell stored energy (and other services that batteries can provide) into the electricity market. The customer is still the owner of the system and is responsible for all maintenance & upkeep to ensure that the system is running as expected – although sonnen’s monitoring will tip the customer off if anything is amiss.

The customer does not need to worry about how much solar or battery capacity is available to them at any given point in time – as long as they keep within the prescribed annual ‘consumption allowance’ they will be charged only the flat monthly fee, which works out to between $360 and $600 per year (depending on the package). It’s sonnen’s responsibility to make the arrangement worth their own while; they anticipate they will be able to get to this point quickly as a ‘critical mass’ of sonnenFlat signups is achieved.

The minimum contract term is 2 years, but system owners can opt to stay on for as long as they like (the standard sonnen system warranty is 10 years, although their high cycle life indicates that they could easily last much longer). sonnen anticipates that their customers will not wish to go back to conventional electricity billing with its inherent surprises once they’ve had a taste of a flat-rate plan.

So is sonnenFlat worth it?

So now the big question: Should you rush to purchase a sonnen battery system, sign up for sonnenFlat and let sonnen run your system – as opposed to purchasing a more ‘conventional’ grid-connected battery setup without the retail component? Or should you just get solar (or carry on with your existing solar system) without batteries at all? Or should you simply just ‘do nothing’ and take your chances with rising grid electricity prices?

We’ve taken a look at some of the numbers to try to work out what might be the best course of action, bearing out the best results over 10 years. In order to do so, we’ve of course had to make some assumptions, which include the below:

Keeping in mind that these figures are very rough (we haven’t done any comprehensive sensitivity analysis), it would seem that the sonnenFlat package in its totality is not yet a better deal than investing in solar alone when looking at cost projections over 10 years. That being said, if electricity prices increase at a rate greater than 3% annually, or if we look at a period beyond 10 years it is likely that the sonnenFlat scenario could work out ahead of the others.

*Cost is higher because of battery-ready ‘hybrid’ inverter as opposed to standard PV inverter.

The case for signing up for sonnenFlat will look even better if annual electricity inflation rates exceed the 3% used in our assumptions – something which is highly probable given the trends of the past few years (we have tried to be conservative here).

It will also look even better as battery system prices inevitably come down. For example, a 50% reduction in prices for both the LG Chem and sonnen eco batteries would result in 10-year total electricity-related costs of about $19,210 and $18,300, respectively (roughly $2,000 and $3,000 less than the base case).

What this seems to indicate is that the sonnenFlat package puts sonnen in an unparalleled position to deliver greater and greater value as batteries become more and more affordable. The increase in savings with sonnenFlat will become disproportionately larger (as compared to non-sonnen battery scenarios) with each decrease in battery price. 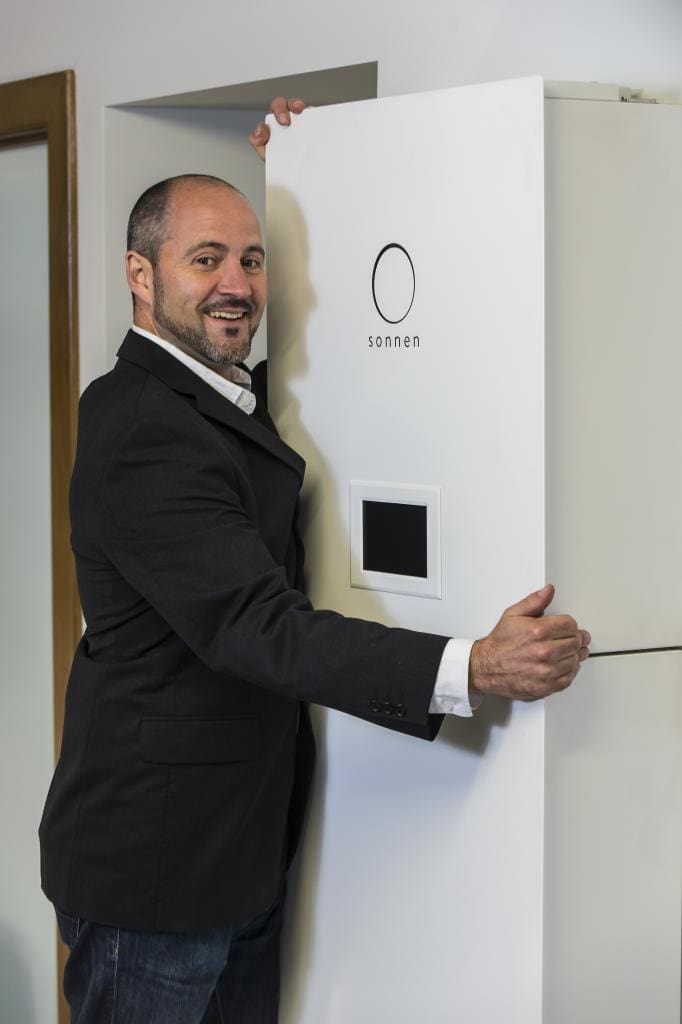 sonnen’s sonnenFlat package is unlike anything else on the market, offering battery equipment that is hand-crafted to work seamlessly with the company’s own retail electricity offer. The company’s outside-the-box thinking is exactly what Australia needs to overcome the energy conundrum it is currently is and choose comfortably at the current crossroads.

But the energy provided under sonnenFlat is not actually ‘free’, as some media outlets have described it (usually in scare quotes, as I have here). Remember that you pay for your solar system and for the batteries yourself. On their own, without the sonnenFlat retail package to bundle them up and glue them together, you will still save a substantial amount of money on electricity bills with solar and non-sonnen batteries – and you won’t necessarily need to spend so much to get one. sonnen’s products are unapologetically on the ‘premium’ end of the market and it’s unlikely that they’ll end up competing with others on price even as their own prices drop in sync with broader trends.

From an ordinary household’s point of view, the capital investment (around $14,000 for the 8kWh unit plus another few thousand for the solar system) certainly feels prohibitive – and the analysis above should show that a bit of apprehension isn’t unwarranted. That being said, the package will undoubtedly have appeal to those of us who are skeptical that electricity price inflation will hover as low as 3% per annum for the next 10 years, or who just want some kind of certainty about what we’ll end up paying.

And with prices having just jumped by about 20% in three states, who wouldn’t be feeling a bit cynical about what other tricks the electricity market might have up its sleeve? With the launch of sonnenFlat, sonnen offers a solid alternative to a conventional retail electricity package and delivers a new layer of value to those who buy into its products and its vision.