Note: Solar Choice is not a solar installer and has no financial or other incentives to promote any product brand over another. This review represents Solar Choice’s opinion and we recommend you do your own research as well.

Guangzhou Sanjing Electric Co., LTD (trading as ‘SAJ’) is a Chinese company focusing on renewable energy conversion, transmission and storage solutions and motor drive and control technology. It was established back in 2005 with a registered capital of 50.4 million RMB making them a comparatively smaller inverter manufacturer.

SAJ’s sales and distribution efforts have traditinally focused domestically in China with 20 branch offices, over 80 service centres and all of their manufacturing facilities. They have now expanded across the world, setting up service centers in Australia, India, Germany, Belgium, Turkey and Brazil.

SAJ Australia Pty Ltd was set up recently in 2019 and is currently operating out of Melbourne, Victoria.

A solar system’s inverter is the point at which the DC electricity produced by solar panels is turned into grid-compatible AC electricity.

String inverters (such as SAJ’s product range) have traditionally been the standard in the solar industry. They send the power produced by solar panels to a central inverter that changes it from the DC electricity to the usable AC electricity that powers homes.

On the other hand, Microinverters, convert DC to AC electricity at each panel and allow for monitoring and power regulation at the panel level. This is useful for homes that are located somewhere with shading from clouds, trees, or other buildings. 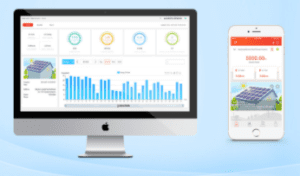 SAJ’s inverters come with access to their monitoring platform at no cost. The SAJ eSolar Web Portal enables solar consumers to access real-time monitoring, remote configuration and email notifications. This functionality are all now common place across most inverter manufacturers.

Perhaps most notably with the SAJ inverters is their very sharp prices as an emerging brand in the Australian market. They do not have the proven track record for reliability of some of the brands that have been established in Australia for a longer period.

The majority of SAJ’s Inverters (under the name of Guangzhou Sanjing Electric Co Ltd) are approved by the Clean Energy Council for the Small-scale Renewable Energy Scheme, which is Australia’s home solar rebate program. 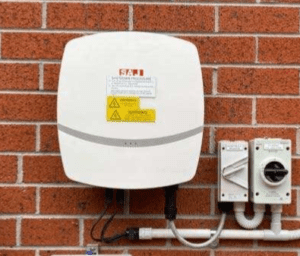 The inverter cools itself with natural convection which avoids the need for a noisy fan and is has moisture ingress protection of IP65 making it suitable for indoor or covered installation locations. The standard warranty with the product is 5 years but is extendable up to 25 years. The commercial Suntrio Plus range features three phase inverters from 25kW to 60kW in capacity. All sizes have 3 MPPT inputs so the product is suitable for roofspaces with a maximum of 3 different orientations. The inverters have built-in DC switches avoiding the need for separate hardware to be installed. The inverter has harmonic distortion of under 3% and is able to adjust the factor by 0.8 leading to 0.8 lagging.

The commercial inverter is much larger with their 40kW inverter being 80cm by 55cm by 28cm and weighing 68 kilograms. Similarly the commercial range of solar inverters comes with a standard 5 year warranty which is extendable up to 25 years. SAJ’s H1 series are hybrid inverters – meaning they are designed to convert DC power to AC as well as charge a battery. Their hybrid series comes in 3kW to 6kW meaning they are suitable for small to medium residential size systems. The inverters are designed to operate in island mode if there is a blackout which means you can continue to receive power from your solar and battery system.

The inverter can charge lithium batteries with a voltage range of 42V to 58.5V with a max charging current of 100A for their 5kW and 6kW models. The product comes with a standard warranty of 5 years and is not extendable.

Based on Solar Choice’s database we have provided the below-average costs as an indicative guide of the wholesale costs of SAJ Solar Inverter. These prices are only available to solar installation companies, not to end customers.

Keep in mind that inverter costs generally only run between 10-20% of your total system, so often it is worth investing in a high-quality inverter given this will have a large impact on the efficiency and performance of your Solar Power project.

Residential inverter efficiency standards are generally 95 to 98 per cent. SAJ inverters meet these standards and have at least 97.8% max efficiency for their residential R5 range and extending up to 98.9% for the 60kW commercial solar inverter.

The three phase 8kW inverter (SAJ R5-8K-T2-AUS) is commonly used in larger residential projects and has a 98.6% max efficiency, making it one of the industry’s more efficient residential inverters.

In Australia, all CEC approved SAJ inverters come with a standard 5-year manufacturer’s warranty. Most inverters in Australia come with either a 5 or 10 year warranty included which leaves SAJ towards the shorter end. Customers do have the option of purchasing an additional years of warranty (up to 20 additional years) from SAJ within the first 18 months of purchase.

SAJ is currently offering a promotional “5+5 Years Warranty Program” which offers Australian customers a free 5 year extension to their warranty. This only applies to R5 single-phase inverters which are purchased through SAJ authorised distributers after June 2019 and before January 2022.

If customers experience any warranty-related issue, the original installer who installed the system should be the first line of support for replacing or repairing the product. However, SAJ also suggests that customers who can no longer contact their original installer should fill out their online warranty claim form on the website or contact them at their Australian office:

So, is SAJ a good solar inverter brand?

Whilst only being in Australia for a short period of time, SAJ have set up a local office and a clear and straight-forward warranty claim procedure that many of their Chinese competitors have not. The price they are selling the products at, puts them at the cheapest side of the market.

Technically speaking their residential inverter range stacks up to what is expected in the market, so the question comes mainly to their reliability. Like buying from most new companies, there is more risk in selecting SAJ over the mainstay European inverters like Fronius or SMA or Chinese-brands with a longer history.