One of the most common solar system sizes in Australia is 3 kilowatts (kW). 3kW solar system strike the right balance between size and affordability, costing on average about $4,700 for a system using decent quality components. But can a home go off-grid with a 3kW solar system and a battery bank? This article takes a look at some scenarios to help you decide if going off-grid is a possibility for your home. The results are based on a solar+storage system sizing tool that Solar Choice is developing in-house which we will eventually be making available to the general public.

Can you be energy self-sufficient with solar-plus-storage? It depends…

Let’s say you have a 3kW solar system on your roof with no access to a generous solar feed-in tariff incentive. There are a number of factors that influence how easily a home could go off grid with a system of this size.

If your home ticks all of these boxes, it could very well be possible for you to be mostly energy self-sufficient with just solar and batteries.

Please note that the figures below are estimates only and should not be taken as final-word advice. Please speak with a solar/storage installer before choosing your final system size. Importantly, our model does not take into account battery or inverter power output limitations – meaning that it may not be possible for your battery system to meet sudden, large surges in demand (e.g. running a vacuum while the washing machine is on).

This home would ordinarily have about 2 day’s worth of energy independence (‘autonomy’) following one day of sunny weather on the average day. The situation would get difficult, however, during extended rainy periods or even during periods where the home consumed more energy than usual – for example, 8kWh on a single day instead of only 5kWh. Furthermore, energy usage would need to be curtailed during the winter to ensure that the lower solar supply doesn’t mean a completely depleted battery bank. A diesel generator wouldn’t be a bad idea if the occupants want to avoid running out of electricity in the winter months.

A household using only 3kWh of electricity daily and with a 10kWh battery would stand a better chance of going off-grid without a generator; after a day of sunny weather, they’d have enough energy stored to carry them for over 3 days, even in winter. However, anyone pursuing this route should be advised that genset costs – both initial and running – can be quite high, so installing one should be considered with caution. 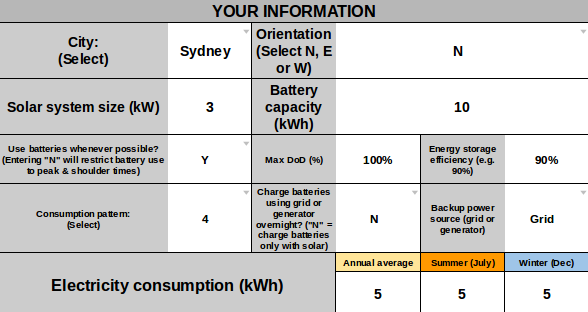 The situation for a Brisbane home with 3kW of solar is not significantly different than the one for a Sydney home in terms of the possibility of being energy self-sufficient. The extra sunshine that the average Brisbane roof receives, however, means that it is possible to install a slightly larger battery bank to capture excess solar energy. The home would have about 2.5 days of energy autonomy on average, but only about 2 in the winter – which might warrant trying to reduce electricity usage down to about 4kWh per day instead.

As with Sydney, reducing consumption to about 3kWh per day would leave a lot more wiggle room with regard to energy autonomy – allowing the home to have nearly 4 days of energy autonomy on average (after a full day of sun), and about 3.5 in the winter. 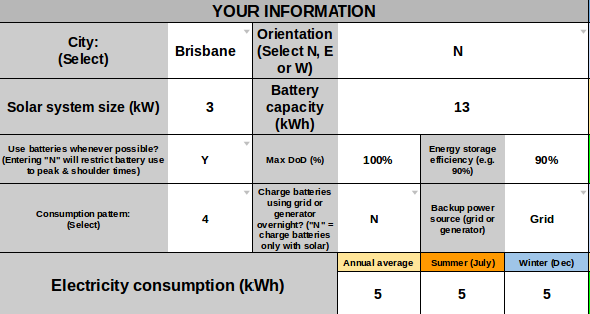 Meeting household demand only with solar plus storage in Melbourne would prove to be a much more difficult endeavour than in Sydney or Brisbane due to the lower levels of sunshine. Even consuming only 3kWh per day on average throughout the year, a 3kWh battery bank would not be fully charged up in the winter. The smartest thing to do here (if space and budget allow) would be to increase the solar system size by about 2kW (to a total of 5kW) and ensure that the additional panels are north-facing and angled to take most advantage of the winter sun (tilted up higher than latitude).

But even then, the low level of solar irradiation so far south would prove to be a challenge to any Melbourne homeowner hoping to get off the grid with solar and batteries alone. Sharp reductions in electricity consumption or a diesel genset may be necessary to achieve any kind of energy autonomy throughout the year. 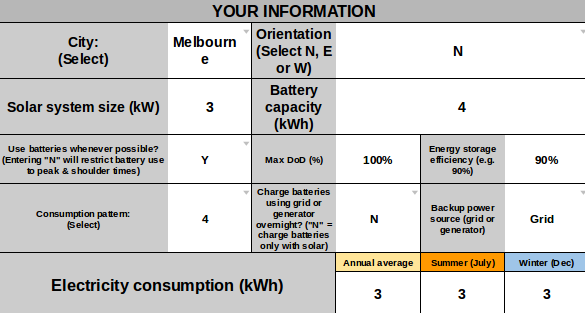 Calculator output results based on the scenario above. It’s clear that it would be quite difficult for a Melbourne home to be energy self-sufficient with a 3kW solar system, even with extremely low electricity usage – particularly in the winter. Additional solar capacity would probably be a worthwhile investment, however. (Click to enlarge.)