The first year of operations of the Tesla big battery in South Australia was celebrated this month by the battery’s owner, Neoen, and marked by the release of new data from independent consultant Aurecon.

The data shows that the battery, or Hornsdale Power Reserve is making plenty of money ($24 million in revenue this year) and may deliver a payback to its owners of less than four years.It is also delivering delivering benefits to consumers by lowering costs, particularly in the frequency control market, but also in wholesale price, and in helping to avoid blackouts.

Tesla makes its money through a $4 million a year, 10-year contract with the South Australia government, and sets aside 90MW and 10MWh to provide grid security.

Other earnings come from 30MW/119MWh allocated to wholesale electricity market, including the frequency control and ancillary services (FCAS) market, where it responds to sudden changes in frequency, such as when big coal units trip. This graph above, presented by Neoen shows the battery – officially known as the Hornsdale Power Reserve – reacting instantaneously and in perfect synchronicity with the changes in frequency – in this case triggered by the failure of a unit at a Queensland coal generator, one of more than 100 such coal unit failures in the past 12 months.

Neoen’s head of development Garth Heron describes this as “regulating the heart-beat of the grid.” It is keeping the links between state grids connected by pushing and pulling on the frequency to make sure it goes back into normal range. 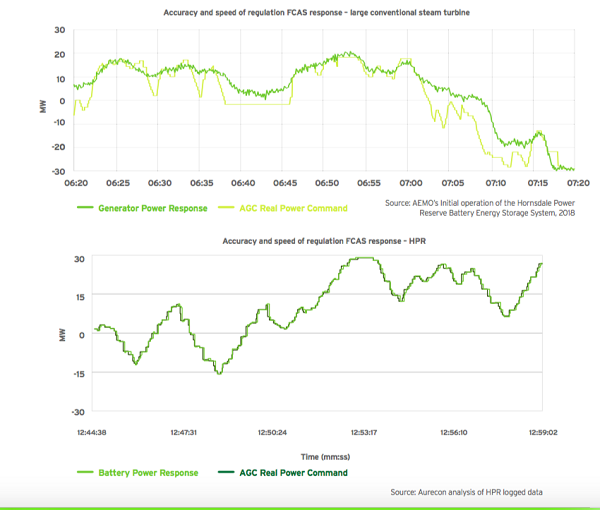 This graph, from the independent Aurecon report prepared by Paul Gleeson, highlights this point. The top one shows what a conventional generator does in response to a signal from the grid. It kinds of oversteps and under-steps, like a drunk walking down a thin white line. This next graph shows the confidence that the battery can provide the market operator going forward. The modelling done by Aurecon looks at what might happen if the Heywood inter-connector – the main link from Victoria and South Australia – were to trip with 200MW of imports. 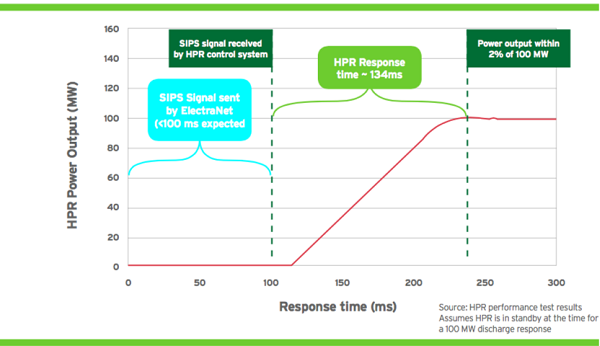 And while the speed of the battery – its ability to respond in 0.1 seconds and switch from full charge to discharge (and vice versa) quicker than a blink of an eye – was anticipated, what has stunned everyone has been its accuracy.

“During a SIPS event, HPR will provide a near instantaneous 70 – 140 MW support for the interconnector. This will potentially prevent Stage 2 of the SIPS scheme being required and therefore, 200 MW of load shedding in SA (depending on the interconnector ow at the time and magnitude of the contingency event).”