Every June for the last three years I’ve attended the Energy Storage Conference & Exhibition in Sydney. This year the event took place on 14-15th at Sydney’s new Convention and Exhibition Centre (ICC Sydney) in Darling Harbour. It was held concomitantly with the Renewable Cities conference.

A snapshot of the exhibition:

As in previous years, the exhibition was free to enter and full of booths from a range of storage-related products, including batteries, electric vehicles and software solutions.

Stopping by the Alpha-ESS booth, I saw how the company is preparing for the possibility that indoor battery installations may not be allowed under the impending battery standard. Their new SMILE units (essentially their old units with new casing) are ingress protection (IP) rated at IP65, meaning that they’re suitable for outdoor installation. 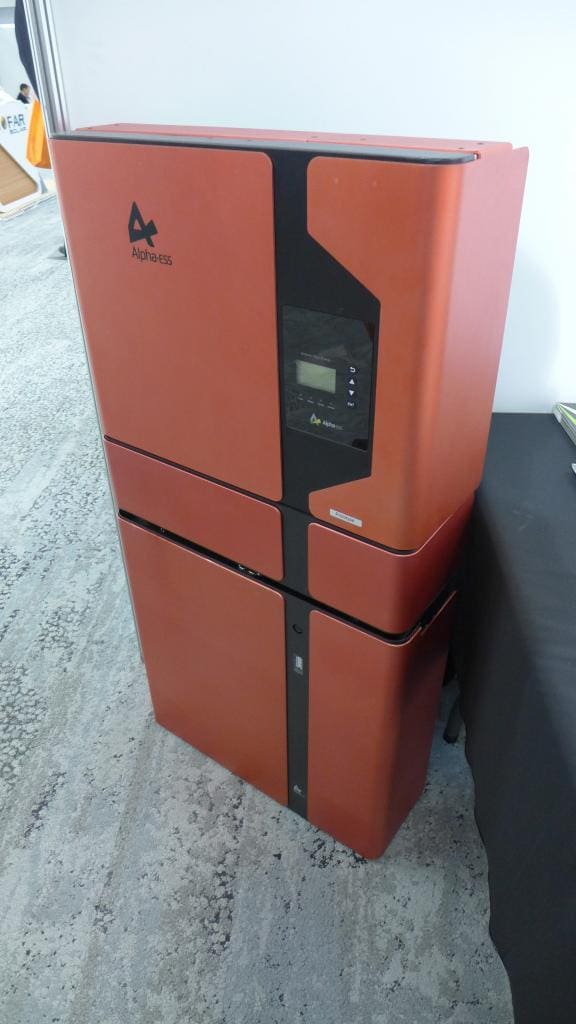 I also managed to get up close with BYD’s compact & sleek MiniES units (their B-Box units were not on display). The MiniES units have 3kW output capacity with 3kWh, 6kWh and 9kWh capacities (as ‘feet’ underneath the main units) and come with a built-in PCS, allowing them to be easily retrofitted onto a solar system with an existing inverter. 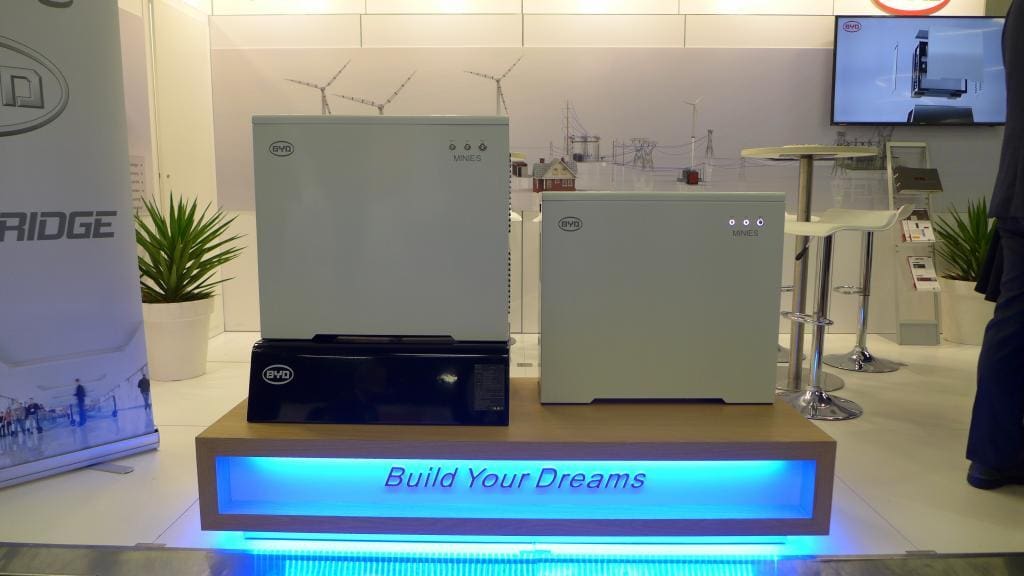 BYD’s MiniES units on display in the exhibition hall.

Tesla also had their Powerwall 2 on display: Tesla’s Powerwall 2 on display in the exhibition hall.

Chatting with the folks at the Reposit Power booth, I learned that they recently launched monitoring-only app which works with any energy system (not just one with batteries, as was previously the case). We briefly discussed the recall affecting a number of their installations, which they said is not an underlying issue with their technology – only the configuration of components in systems they’re connected to. Their booth was well attended throughout the two days of the exhibition.

I spoke with one of the people at the IntelePower / Century Yuasa booth – a regular staple at this event every year. The company specialises in large commercial & industrial applications for batteries, and as such isn’t very well known in the residential space. I learned that they’re Australia’s last battery manufacturer, and has been well aware of the benefits of batteries for quite some time. Their solutions may not be pretty, but they’re evidently quite practical.

There were a number of vehicles on display on the exhibition floor, ranging from plug-in electric hybrids to fuel cell to full electrics. One of the plug-in hybrid electrics (PHEV) was a Mitsubishi Outlander on display with ChargePoint charger – I had a chat with representatives of both. The gist was that electric vehicles have enormous potential as new ‘moving parts’ on the grid, but that Australia is currently still sorely lacking standards & leadership to make two way transfer of energy possible and viable (e.g. using EVs as mobile batteries and widespread availability of shared charging infrastructure). The vehicle on display was showing off how it could be used to run appliances (e.g. the floodlights) – an application already allowed and common in Japan but not currently possible in Australia. 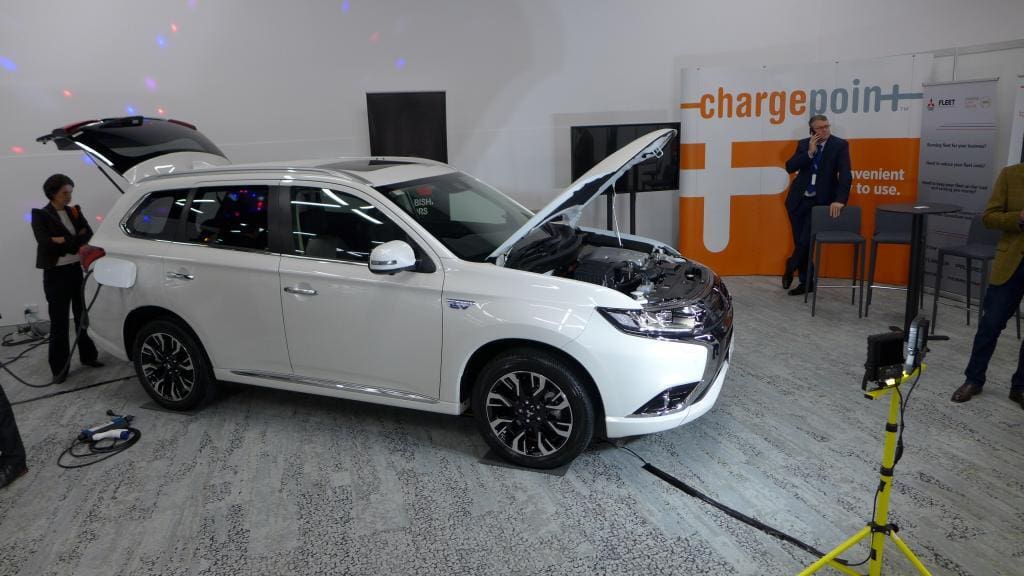 A Mitsubishi plug-in hybrid electric vehicle; the vehicle’s battery is being used to run the floodlights at front.

I also had a chat with some of the folks at the Hyundai booth about their fuel cell-based ix35 (their electric one wasn’t able to make it). For those who have ever wondered how a fuel cell works (as I have), here’s the (very brief) rundown: A small amount of hydrogen can power a fuel cell car for long distances, with no emissions but water. However, creating hydrogen requires special equipment and an energy input (mostly fossil fuel if you source it from the grid), and you may only get out about half a kilowatt-hour (kWh) of energy for every kWh that you do (not a very efficient process – yet). Furthermore, there aren’t many hydrogen fuelling stations in Australia, and they’re not easily installed at a home. In sum: Hydrogen fuel cell vehicles are interesting but still have quite a ways to go before mass uptake in Australia. 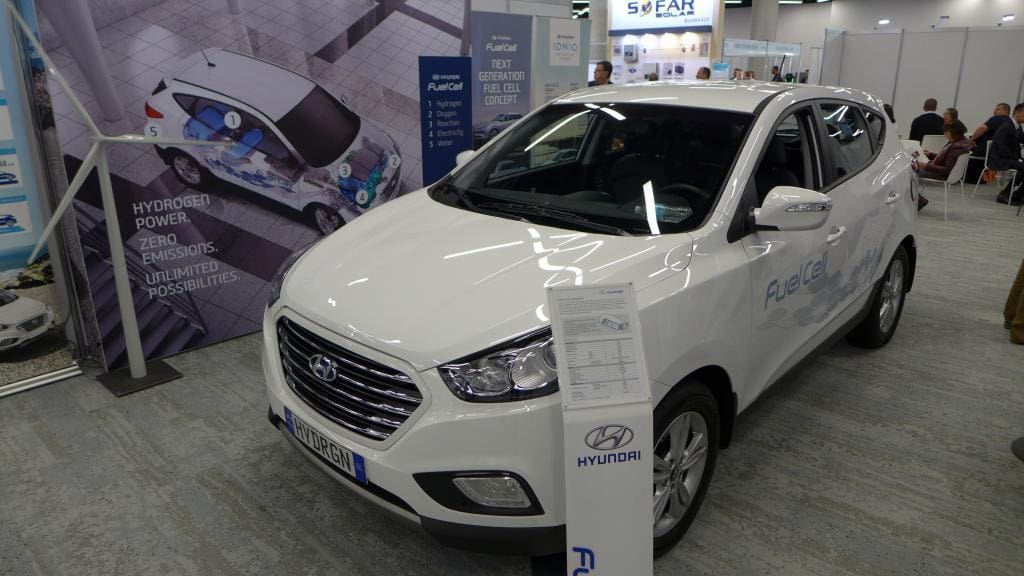 Also on display at the Tesla booth was one of the company’s fully electric (as they all are) Model X, alongside the company’s much-vaunted Powerwall 2. 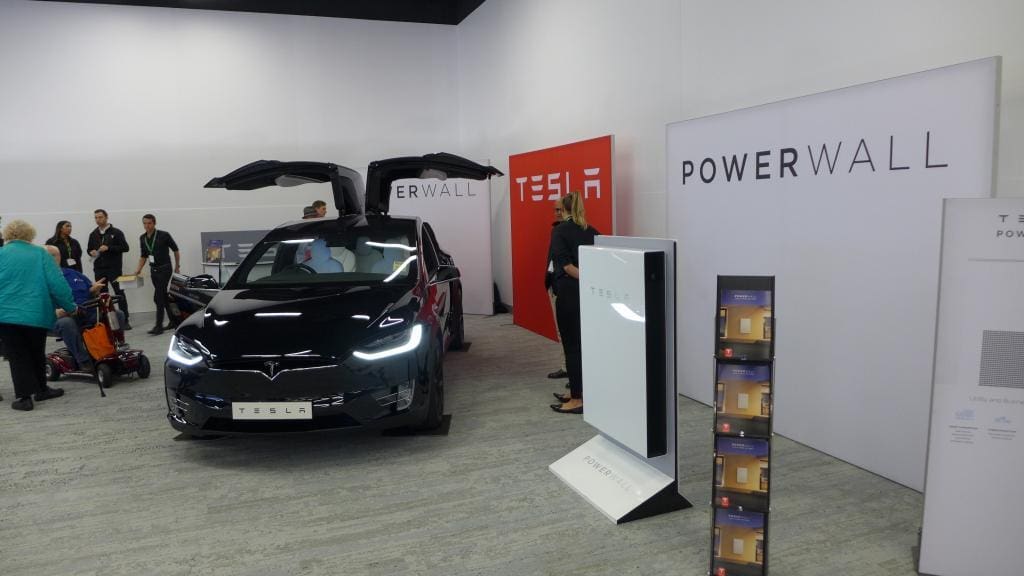 Tesla’s booth in the exhibition hall, replete with Model X and Powerwall 2 on display.

A snapshot of the conference & talks: 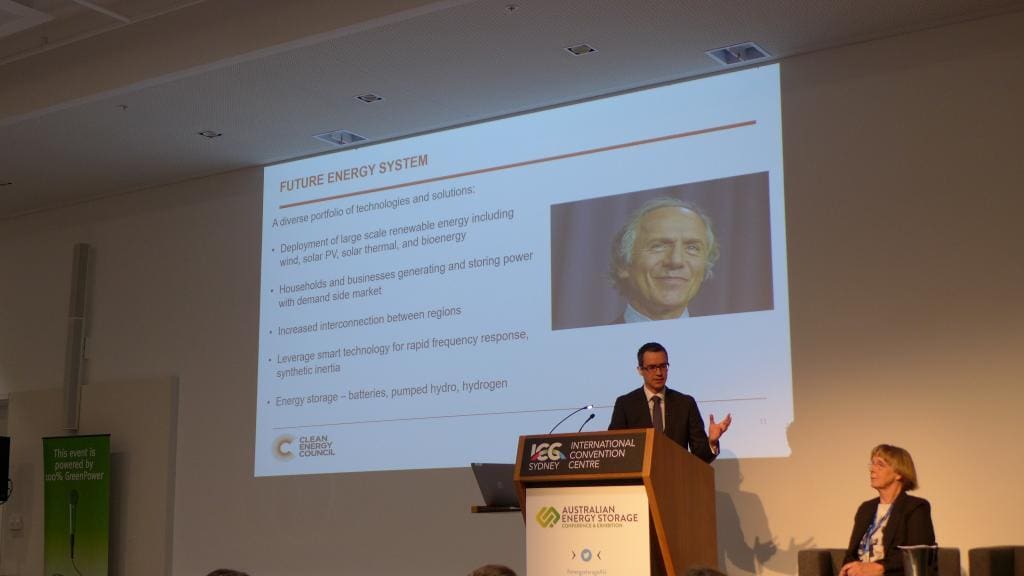 This year the theme was ‘investing in Australia’s energy future’, and conveniently coincided with two news items of significance to the energy sector: the release of the ‘Finkel review‘ and the announcement that the ‘big 3’ electricity retailers will jack up prices from July 2017 – with others likely to follow. Much of the discussion focused on the topic of how distributed generation & batteries can be better deployed in and harnessed by the electricity system – and the current lack of leadership that seems to be making things worse for both industry and end consumers.

There were lots of talks across two streams (not even counting the Renewable Cities conference happening simultaneously in the same building – which I did not manage to attend). Here are some of the highlights from the ones that I attended – by no means meant to represent the entirety of presentations that were given:

A snapshot of other conversations I had: