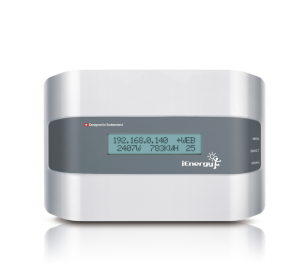 The i-Manager collects solar panel/i-Micro power and performance data and, in through the i-Monitor device, makes the statistics available via an Internet portal.

–Optimisation of harvested solar energy: With microinverters, each solar panel functions as an independent unit. Whole solar system output is therefore much less susceptible to the negative effects of partial shading.

–Greater ease in system design and installation: The plug-and-play nature of the i-Micros makes it easier to configure solar systems. The use of microinverters also allows greater flexibility in solar system design–panels may be installed at different angles and in different directions; this is not possible with conventional string inverters.

–Compatible with a range of solar panels: The i-Micro may be used alongside both 60 and 72-cell PV modules, provided their power output specifications fall within the applicable range.

-Higher real power output (at 230W) than than competing microinverters

–More detailed performance monitoring and easier troubleshooting than conventional systems: The performance of each panel can be monitored independently with a microinverter setup. This is not possible with conventional inverters, which can only ‘see’ solar panel performance at the string level.

–25-year warranty: iEnergy offers a 25 year warranty on its i-Micro microinverters. This is the same duration as the standard warranty for solar panels.

Manufacturing facilities:  Thailand, contract manufactured by Delta Electronics, a leading electronics components manufacturer since 1971. They are the world’s largest manufacturer of power supplies.

History in the industry: iEnergy has been involved in PV power optimisation since its founding in 2009, leveraging its knowledge/expertise in the photovoltaic, semiconductor and power electronics industries.