A new report has reinforced the view that there are no major economic or technical barriers to shifting the world to 100 per cent renewable energy; nor to the complete phase-out of fossil fuels. In fact according to the report, released on Monday by Greenpeace International, we could do this by 2050 for a net economic gain. All that’s needed is the political will.

Greenpeace’s Energy [R]evolution scenario 2015 phases out coal, oil, gas and nuclear energy as fast as technically and economically possible, by expanding the renewable energy share to 42 per cent in 2030, 72 per cent in 2040 and 100 per cent in 2050. 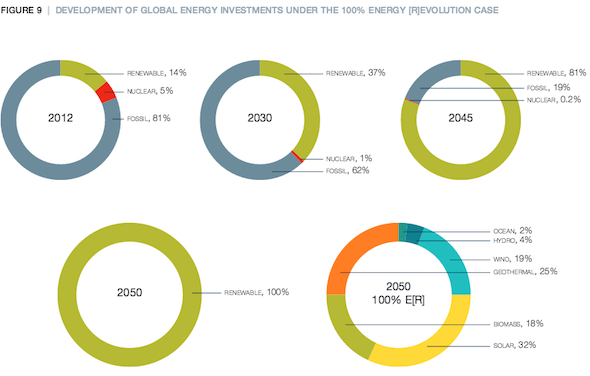 The only remaining use for fossil fuels, says the report, would be in the non-energy sector, such as petrochemicals and steel making.

Of course, the transition will not come cheaply. According to the report, the costs will be “huge” at around $US1 trillion a year. But the analysis also shows that the savings are even bigger.

“The investment costs for the switch to 100% renewables by 2050 is about $US1 trillion a year,” the report says. “But because renewable energies don’t need fuel, the average fuel cost savings are $US1.07 trillion a year.

So the investment over the period is met in full (107 per cent) by fuel cost savings, with the cross-over happening between 2025 and 2030.

A large part of the report focuses on the global power generation sector, which it notes has been the most dynamic, with renewables comprising 60 per cent of new generation world wide in 2014, despite energy subsidies still being “weighted heavily in favour of fossil fuels.”

“Electricity will become the major renewable ‘primary’ energy, not only for direct use for various  purposes but also for the generation of synthetic fuels for fossil fuels substitution,” says the report. 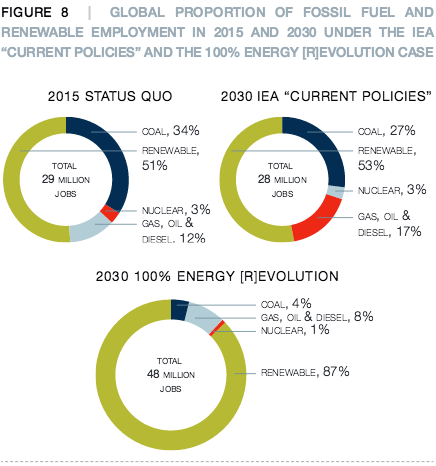 The report also finds that more jobs would be created in the energy sector by this shift – with the solar industry alone employing as many people in the future as the coal industry does today.

According to the data, the solar PV industry would employ 9.7 million people by 2030, more than 10 times as many as it does today. Jobs in wind power would grow to 7.8 million over the same period.