The American solar PV sector was given a boost as a result of the US$2.5 billion deal, between MidAmerican Energy Holdings and SunPower, to purchase the worlds largest solar energy plant. In the immediate wake of the deal SunPower saw a 60 percent increase in its share value for the first three days after trading, such is the respect for MidAmerican’s founder Warren Buffett.

Some of the solar industries biggest players also benefited from the faith this investment shows in the solar industry, showing increases in share price. First Solar was up 16 per cent, Trina Solar 24 per cent, Suntech Power 29 per cent, LDK Solar 40 per cent and Yingli Green Energy 27 per cent, however, the following day saw prices decrease while still remaining slightly above previous levels. 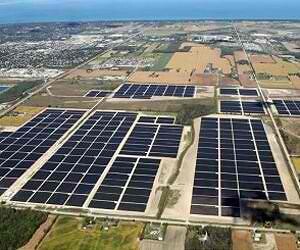 Buffett’s investment is in the solar plant, not SunPower itself, showing that the money for investors is currently at the end of the supply chain, however, the initial announcement caused a rush for all ‘solar’ linked companies leading to a sudden jump in the share price followed by a similarly sharp decrease. Had MidAmerican invested directly in SunPower it is highly likely that the increase share price would have been maintained, with the share price potentially exceeding the 60 percent initial increase.

SunPower will benefit from the purchase of their solar power plant through their involvement at an engineering level, while MidAmerican will profit through their ownership of the plant. This diversification from the sole business model of manufacturing solar panel will help SunPower, and companies involved in similar projects, to shift their balance sheets from the red to the black securing the long term future of both their companies and the solar industry.