New research from US-based consultancy McKinsey & Company has found that battery storage is already a “profitable” investment for some customers, across a range of “certain applications”.

According to the report, battery storage makes economic sense, right now, for a subset of commercial customers in “each of the four most important applications:” demand-charge management, grid-scale renewable power, small-scale solar-plus storage, and frequency regulation. 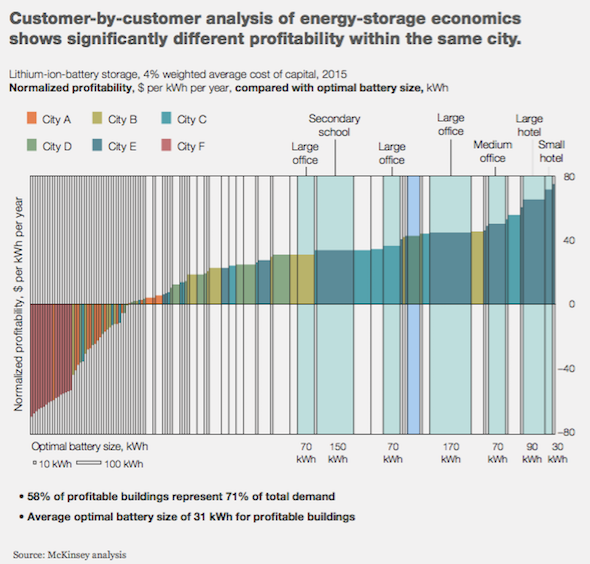 The modelling is based on US data and policy settings – “for more than a thousand different load profiles, dozens of batteries (including lithium ion, lead acid, sodium sulfur, and flow cell), and dozens of electricity tariff and pricing tables” – and so does not necessarily apply elsewhere, but some of the more general findings of the report are well worth noting.

These include that storage providers must be “open-minded in their design of energy-storage systems,” including which chemistry and supporting technologies they choose – and that these sort of “tailored approaches” are likely to find and extract the greatest value.

The report also notes that grid-scale application of battery storage will take some thought. Examples suggested by McKinsey include the adoption of demand response programs and/or tariffs that favour solar self consumption or load shifting.

Finally, the report says, “the most important implication is this: the large-scale deployment of energy storage could overturn business as usual for many electricity markets.

“In developed countries, for example, central or bulk generation traditionally has been used to satisfy instantaneous demand, with ancillary services helping to smooth out discrepancies between generation and load. Energy storage is well suited to provide such ancillary services,” authors Paolo D’Aprile, John Newman, and Dickon Pinner write.

“Eventually, as costs fall, it could move beyond that role, providing more and more power to the grid, displacing plants. That moment is not imminent. But it is important to recognize that energy storage has the potential to upend the industry structures, both physical and economic, that have defined power markets for the last century or more. And it is even more important to be ready.”