Even for those who are fully onboard in their support of renewable energy and understand how it can save them money, finding a meaningful way to take advantage is not always without its hurdles. The concept of community-owned solar has been introduced in parts of the US to remove many of these obstacles and clear the way for ordinary people to save money on their power bills through cleaner electricity.

Thanks to their scalability, solar panels are often seen as the most accessible renewable technology for ordinary people. Solar panels are not just for utility-scale power plants; if a homeowner is looking to run their house (partially or fully) on the power of the sun, they can have a solar system installed.

With costs coming down quickly, rooftop solar has proved itself to be incredibly popular in the past few years and is only expected to become increasingly commonplace around the world. But it is not a viable option for everyone. First, there may be fiscal obstacles–not everyone can afford to purchase a system outright. Solar leasing schemes have sought to address this, making it possible to have a system installed for $0 down whilst saving money on power bills from day 1.

But solar leases aren’t for everyone. Some people would prefer to own their panels themselves instead of leasing their roof out to the company that sells them solar power. Even if it is an attractive option, there could also be issues with the roof itself which would prevent a solar lease from being an option in the first place: Nearby buildings or objects could block sunlight for all or part of the day, casting shadows on any proposed solar array and thereby making significantly dampening the returns. The roof might be facing the wrong direction altogether, or might be tilted at an unfavourable angle. Worse yet, roof conditions might be perfect but local bylaws or building codes might prohibit solar panels for aesthetic reasons.

Where did the community-owned solar concept come from?

One solution that is already being deployed in the United States but not yet found in Australia is the ‘community solar’ model. Solar Choice spoke with Todd Davidson of the Colorado-based Clean Energy Collective (CEC, not to be confused with Australia’s own CEC) about what, exactly, community solar is and what makes it an attractive option for Americans.

Clean Energy Collective is one of the most successful companies in the US to take this model to the public. They sell panels to individuals as well as businesses and have reached agreements with utilities in a number of states to offer their solution to an ever-increasing number of customers. As of the time of writing, they have online or under development 34 solar projects through 13 utilities in 6 different states, representing 17.9 MW of solar capacity to the grid.

According to Mr Davidson, the solar community concept was birthed when a group of environmentally concerned Coloradoans got together to find ways that they could make themselves collectively more energy independent. One of the obvious solutions that stood out to them was going solar–solar panels generate power on-site for consumption on-site. However, with some of the obstacles mentioned above (and especially seeing as how the cost of solar power was much higher at that point in time), it didn’t make sense for each home in the community to have their own panels; they would have varying levels of efficiency, output and therefore investment-worthiness. 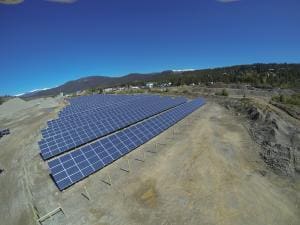 Through deliberation, the alternative model that they eventually decided on was a pooling of resources to have a solar farm (or ‘solar garden’) built on a plot of land instead of on roofs. Each member would own a certain number of panels (not simply a ‘share’ of the project) in the plant depending on their means & needs. The power from the panels, of course, does not go directly to the home of the panel owners, but is instead routed through a utility, which credits their owners for the solar power produced, but it is still very similar in principle to rooftop solar. Using this approach, participants are able not only to take advantage of economies of scale (the cost of inverters, mounting are split between participants) that come with buying in bulk, but also eliminate system inefficiencies, as the plant is located on a piece of land vetted to be optimal for solar exposure.  From this experience, the community-owned solar model was born and quickly evolved into a viable business. CEC member signing the back of his solar panels. (Image via CEC)

In addition to savings, the community ownership model promises a number of other benefits to individuals who buy into it. The farm is professionally maintained, so when problems occur it isn’t up to the individual household to fix it. When someone moves, there’s no need to worry about what to do with the panels on their roof. Community solar members also have the advantage of not being locked into purchasing a minimum or maximum system size; CEC’s customers, for example, can economically buy in with a purchase of as little as 1 solar panel, or calculate backwards from their electricity needs to purchase enough panels to meet 100% of their electricity needs, or add more over time (assuming additional panels are available in an array). Panels can be sold later if and when their owners wish to opt out.

Would the community solar model work in Australia?

The community solar model works in the US thanks mainly to the prevalence of ‘net metering’ (sometimes referred to in Australia as a 1-for-1 solar buyback arrangement), where utilities are obligated to credit solar system owners for their excess power at a rate equivalent to what they pay for electricity from the grid. Because of the relatively low cost of electricity in most parts of the US (compared to the remarkably high ones in Australia), combined with the higher cost of solar there, payback periods can easily stretch out to 8-10 years.

There are some key differences that would make this model slightly more difficult in the Australian context. The first is that net metering for reasonable rates is not an option here–utilities will generally only offer around 8c/kWh (if they offer anything at all), compare to retail electricity prices in the range of 25c/kWh. This means that having solar requires, as much as possible, self-consumption of the electricity generated by panels, which in return means having that power go direct into the appliances of the home or business in question–clearly not possible if the solar plant is located elsewhere and the power it produces must be mediated through a utility.

Still, the concept is a very interesting and attractive one, and one that could possibly be made to work if the organisation running the community-owned solar farms could bring onboard projects large enough to have bargaining power with utilities. Australia already has a lot going for it in the world of small-scale solar: nearly 2 million homes with panels on their roofs, some of the lowest solar PV system installation costs in the world and the fact that it is common knowledge that solar power is a way to save money on power bills. It’s doubtless only a matter of time before someone finds a way to make it work.