Wind and solar power costs appear to have crossed a new threshold, after a US energy tender suggested “firm and dispatchable” renewables were now cheaper than existing coal plants.

The stunning revelation, quietly released over the Christmas/New Year break, came from Xcel Energy in Colorado, which last year put out a “request for proposals” (RFP) to replace two coal-fired generators it aims to shut down, as it moves to take its share of renewables to more than 50 per cent.

According to Carbon Tracker, these are the lowest renewables plus battery storage bids in the US to date, and most likely anywhere in the world.

(See graph below. This shows that the operating cost of the cheapest coal plants in Colorado is just below $US40/MWh, rising to more than $40/MWh and then soaring beyond $100/MWh for the most expensive units) 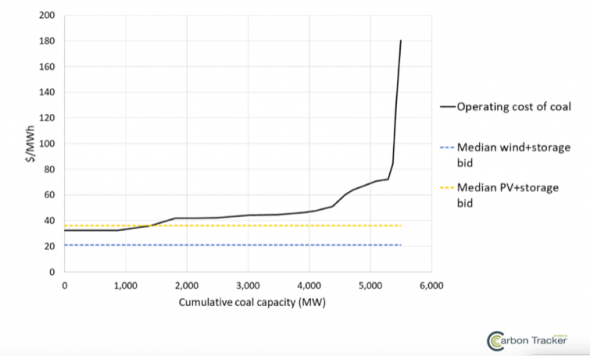 The significance of the tender result is the small additional cost of storage – between $US3 and $US7/MWh. This is less than half the $US15/MWh priced in the previous lowest bid – $US45/MWh for solar and storage in a bid accepted by Tucson Energy easier last year.

The significance for Australia is enormous. The battery storage sector has only just commenced, but the potential is clearly huge.