The average Queensland home on a regulated electricity tariff will see its power bills increase by around 13% for the financially year 2014-2015, or $191 annually, according to the Queensland Competition Authority’s (QCA) final determination on the topic. The increases, which pile on top of a 21% rise last year, will not affect households and businesses who are already supplied through a market contract.

The QCA says rising wholesale costs, ongoing payments to solar system owners through the state’s Solar Bonus Scheme, and charges to pay for network infrastructure (‘poles and wires’) are the primary drivers behind the rise in electricity prices, accounting for approximately 38%, 28% and 20% of the increases, respectively.

The remaining 14% can be attributed to retail charges and costs associated specifically with the Carbon Tax. (All of these figures are estimates only, and will differ depending on household electricity usage and tariff.)

The report says that, if the Carbon Tax is repealed, the rise in wholesale electricity prices will be ameliorated to some degree, resulting in a total increase of only about 5%, or $72/year.

Interestingly, the QCA points out (as per the image below) that costs associated with the embattled Renewable Energy Target (RET) have actually fallen between last year and this year. Altogether, charges that can be traced back to the RET account for only 3% of the average household electricity bill–down from 3.5% the previous year. Analysts have projected that costs associated with the RET, if the scheme is kept in its current form, will eventually turn into a net benefit, putting a damper on power bills increases for all grid-connected homes. 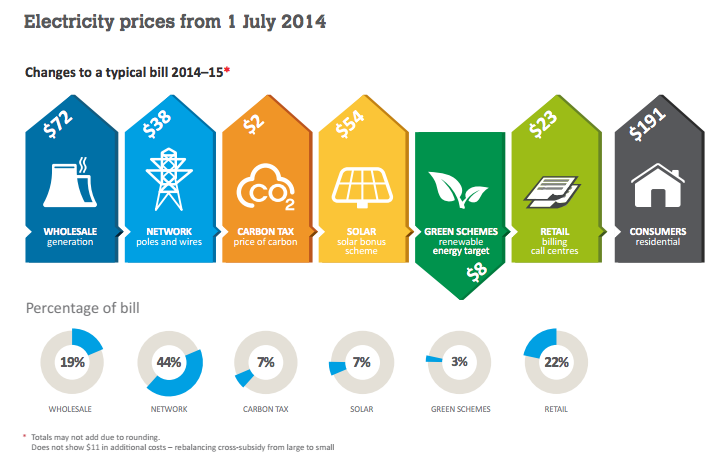 Network costs, which have riven substantially in the last few years, still comprise the vast majority of the cost of electricity. Network costs were responsible for a rise of $127 (of $268) in 2013-2014. The issue of network costs has been a contentious one, with accusations that network companies were ‘gold-plating’ the networks in 2012 leading to the previous federal government calling for an investigation into electricity market reform. The Australian Energy Regulator even took steps to crack down on the problem earlier this year.

The image below (from 2013-2014’s QCA report), compared to the image above, gives some perspective on how prices changed between this year and last. 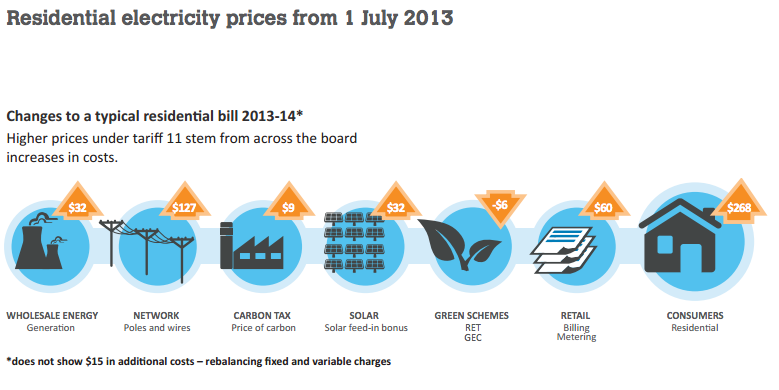 All images via the Queensland Competition Authority