The Australian Solar Council, in preparation for the the announcement of the recommendations of the Renewable Energy Target (RET) review panel, has urged installers across the country to ‘sell solar’ in order to help demonstrate the broad popularity of residential solar power, as well as to build up the country’s political constituency of solar panel owners. The review panel’s report, which has already been delivered to the relevant government ministers but not yet disclosed to the general public, will be highly influential in deliberations about target’s future.

The past week has seen a barrage of media activity about the RET’s fate, starting with an article in the Australian Financial Review which cited an unnamed government source who said that the panel’s report had been sent back to its authors with instructions to look more closely at a scenario in which the scheme is dismantled entirely. If the PM’s intentions come to fruition, existing large-scale projects would reportedly be grandfathered in and therefore still eligible to generate LGCs, but all other projects in the pipeline counting on the target to remain in its current form–worth around $11 billion–would be left stranded. Small-scale solar incentives would also likely be scrapped.

Advocacy group Solar Citizens, in a mass email to its supporters, noted that the Prime Minister met with Environment Minister Greg Hunt and Industry Minister Ian McFarlane over the weekend to discuss the review panel’s report in private. The not-for-profit, which has collected over 25,000 signatures from people in favour of retaining the RET on a petition to be delivered to Tony Abbott, has plans to deliver an ‘unmissable message’ to the PM in the form of the words ‘SAVE SOLAR’ written in the sky above Parliament House. They will also be speaking to the media on the lawn and will have on display thousands of  ‘Keep Solar Strong’ postcards from around the country. Since its inception, the Solar Citizens has sought to foster cohesion among solar voters, and its activities have been key in ensuring that the collective political voice of solar system owners across the country is heard. 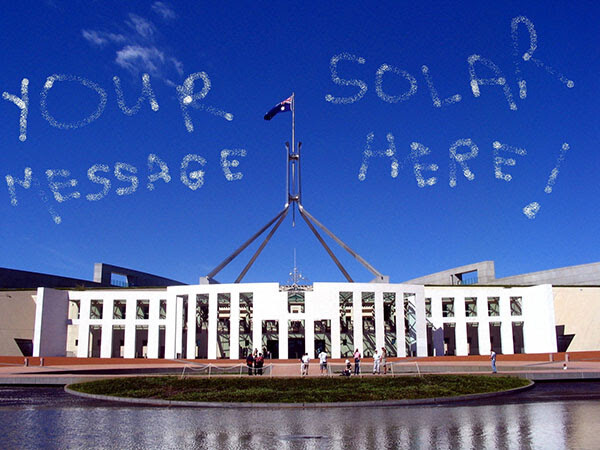 In a similar vein, the Solar Council has announced that it will push forward with a marginal seats campaign by setting up community forums in marginal electorates around Australia. The aim will be to put further pressure on the government to back down on its apparent plans to demolish the RET. The Coalition will already have to go through an unruly and potentially uncooperative Senate in order to make significant changes to the scheme.

While pointing out that the Coalition is unlikely to be able to do away with the small-scale portion of the renewable energy target (SRES), the Council also says that the government has already effectively managed to kill the large-scale target by creating an atmosphere of extreme uncertainty for the industry, which as in turn scared away investors. The next step, says the Council, must be to convince the Coalition to change its anti-renewables stance, which is currently ‘based on a radical ideology’ and does ‘not have the community interests at heart’. This is the purpose of the marginal seats campaign.

A voice from the media has also chimed in on the topic of the RET: SMH economics editor Peter Martin called out Environment Minister Greg Hunt about his 180 on the scheme, as Mr Hunt went from from an avid supporter of renewables to an accomplice (or at best a passive bystander) in the government’s plans to repeal the most important incentive program for renewables left standing in Australia.

Perhaps most importantly, however, Mr Martin manages to point out the absurdity of the Coalition’s witch hunt agains the RET, whose public costs, while present, are virtually negligible in the long-term:

What’s important is that these are small numbers. The broader finding is that the scheme changes electricity prices little, in either direction.  The introduction and then removal of the carbon tax and a steady stream of price increases from suppliers themselves swamp the impact of the target.

Competing modelling by Roam Consulting for the Clean Energy Council finds the target will cut bills by $50 a year by 2020, also a low number.

A third set of modelling conducted by Deloitte Access for the Chamber of Commerce and Industry, the Business Council and the Minerals Council finds it will  add $49 to household bills – another low number.

These numbers quickly and easily debunk the idea–vocally espoused by the Prime Minister–that renewables and the RET are having a significant impact on electricity prices. But neither this consideration–nor the thousands of jobs that are at stake if the RET is eliminated or the investment dollars that are fleeing the country–look likely at this point to change the minds of those in the cabinet.

Ironically, if previous announcements about renewable energy incentive cuts are anything to go by, a public announcement by the government about its intentions to shut down the scheme are likely to drive households across the nation to go solar in droves. Nearly every state in the country serves as a precedent for this phenomenon: Queensland, NSW, WA, Victoria, South Australia and even Tasmania have seen deadline-spawned rushes to go solar when feed-in tariffs were slashed. The same has been true of the federal government’s Solar Credits Multiplier, which has seen a number of reductions in the last few years.

As RenewEconomy’s Giles Parkinson points out, however, a stable policy environment–rather than a once-off boom–is what the renewables industry needs. “Subsidies, in a few years, may not be needed,” he writes. “What the industry wants is a measured and balanced approach to wind that down. The boom-bust cycle of ‘solar-coasters’ are not good for business, customers or the economy.”