Is solar about to enjoy it’s own Twitter moment? There are lots of comparisons about the impact of solar on the utility business model and what occurred at Kodak in digital photos, and telcos with mobile phones.

The impact of the internet on the media is another obvious comparison. But what was the moment that finally broke the camel’s back? According to Bloomberg New Energy Finance’s Kobad Bhavnagri, it was the arrival of Twitter.

This graph, presented at the Australian Solar Council conference in Melbourne, shows how the business model for traditional media companies was slowly eroded by the arrival of the internet in 1982, and finally trashed as the arrival of Twitter in 2006 created a major inflection point. 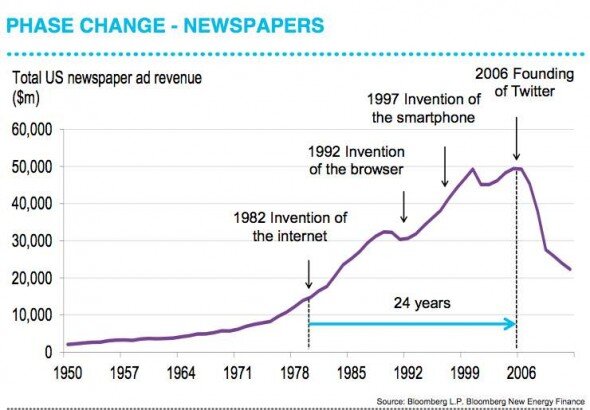 Bhavnagri said the same thing is likely to happen to the electricity utility business model.  “It took 24 years between the founding of internet and the collapse of revenue,” Bhavnagri noted.

“One thing for certain is that things are rapidly changing” in the energy market. Behind the meter solar PV was virtually unstoppable, he said, echoing the thoughts of many other independent analysts.