(This article was originally published in March 2016. We have updated it for clarity and simplicity.)

Compare quotes from pre-vetted installers in your area

Is energy self-sufficiency possible with a 10kW solar system and batteries? 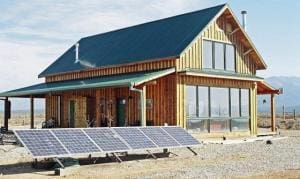 We’ll assume that you live in a home with a 10kW solar system and no solar feed-in tariff incentive, meaning that you are better off ‘self-consuming‘ your solar energy than sending it into the grid. Whether or a not a home could sever ties with the grid with a system of this size depends on a number of things, including:

Please note that the figures below are estimates only and should not be taken as final-word advice. Please speak with a solar/storage installer before choosing your final system size and products.

Going off-grid with 10kW of solar and batteries (Sydney example)

Using SunWiz’s PVSell software, we took a look at the case for going off-grid with a 10kW solar system in Sydney below. The primary thing that we’re looking at is the ‘one day storm blackout protection’, which is a good indication of how much energy independence – and therefore off-grid readiness – that a solar & storage system can deliver. It’s also useful to look at the ‘energy self-generation’ figure, which shows the percentage of energy the 10kW solar system would produce relative to the amount of energy the home consumes.

The verdict: Off-grid with 10kW of solar? Definitely possible

As you can see, it is clearly feasible for households with low electricity consumption (10kWh per day) to cut ties with the grid with a 10kW solar system and some batteries. In fact, 10kW of solar may actually be overkill in many of these cases when energy consumption is only 10kWh per day – meaning there’s plenty of room for the home to use more energy, either on occasion (e.g. during parties) or regularly (e.g. as the number of people living in the household grows). Even if their average daily electricity consumption rose to 15kWh per day, the solar PV system would still produce enough energy to meet the home’s energy demand.

Of course, one thing we haven’t talked about here is cost. Although a 10kW solar system will typically cost between $10,000 and $15,000, the batteries will be a bit more expensive (indicative prices here). Additionally, there are a number of other things that homeowners thinking about going off grid should take into consideration.

One positive is that you don’t have to go off grid to benefit from solar & batteries. Actually, having a grid-connected solar & storage system might be a better investment, while still affording the owner a large degree of energy independence (and giving you the reliability of having the grid as a ‘backup’ source of energy).

Since 2008 our knowledge and sophisticated software has allowed over 160,000 Australian households make a well-informed choice on their solar & battery installer.