Like the rest of Australia, solar power system prices in Hobart have been on a downwards trajectory for several years now, making solar panels an option to consider for anyone living in Tasmania’s capital. This article is an overview of what you need to consider when when shopping for a solar system in Tasmania, including pricing, incentives and system sizing.

Benefits of solar power in Hobart: Generate your own electricity

Having a solar panel system on your roof delivers energy bill savings in two ways:

With grid electricity prices (the purchase price of electricity) at about 26 cents per kilowatt-hour (kWh), Tasmanian households maximise their solar benefits through self-consumption. With a current feed-in rate of 9c/kWh, on the other hand, sending energy into the grid for bill credits is mainly a secondary benefit to having solar.

How much energy will a solar system produce in Hobart?

The average Tasmanian rooftop receives an annual average of about 3.8-4.4 hours of peak sun per day (according to the Bureau of Meteorology and PVWatts, respectively), although this number will be higher in the summer and lower in the winter. You can think of ‘sun hours’ as the units of raw fuel for solar panels – the more sun hours in a particular location, the more energy a solar panel will be able to generate.

The typical unit for counting solar system energy yields is kilowatt-hours (kWh) – the same unit that you’ll see on your electricity bill.

Below we’ve listed a few popular solar system sizes and the amount of energy that they would produce in Hobart provided they are unshaded, face north, are tilted at a 30 degree angle and with an overall system efficiency of 75% (to be conservative):

So what size solar system do I need for my home?

The size of system that you end up deciding on will depend on your budget and goals. In practice, if you live in a ‘typical’ Australian household consuming 15-25kWh of energy per day, a 5-6kW solar system should go a decent way towards saving you money on your electricity bill. The only reason you may want to consider a larger system is if you’re consuming significantly more than 25kWh/day.

You can play with the numbers yourself using our Simple Solar System Payback Estimator tool.

How much does a solar system cost in Hobart?

To give you a rough idea of how prices have changed in the last few years, the chart below tracks the downward trajectory of solar installation prices (in dollar-per-watt format) between August 2012 and 2020. Typically costs of solar have tracked slightly higher in Tasmania reflecting additional freight costs of equipment from manufacturing locations. 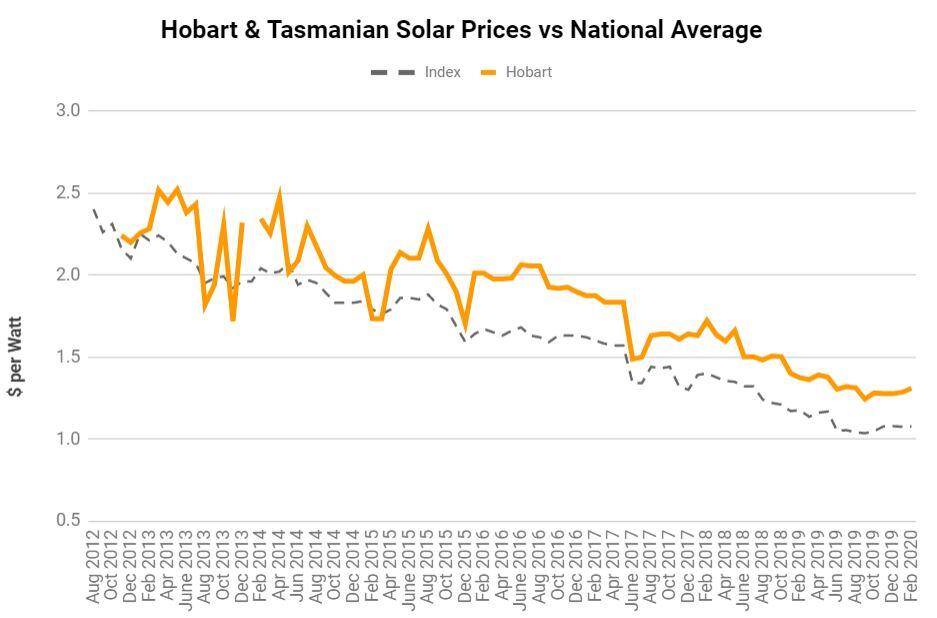 Choosing the right solar system size for a home or business requires first establishing your budget and goals, plus the government incentives available to them. Different homes use different amounts of electricity, and at different times of day. Tasmanian households & businesses should aim to consume as much of the solar electricity that their systems produce as possible to ensure they get the most value as possible. Excess electricity, which is automatically exported to the grid when not consumed by appliances inside the building it services, will earn their owners credits on their bill to the tune of about 8c/kWh, whereas consuming the solar power directly will save them 26c+/kWh on their power bills in the form of avoided electricity purchase.

Basically, it is a question of ‘offset value’ vs ‘export value’, and the offset value of solar power is much more than the export value. This means that solar system owners should try to consume power as much as possible during the daytime, and systems should be sized to meet daytime demand (unless you also install a battery storage system).

(…or check out our solar-only system sizing tool.)

Hobart residents who install a solar panel system will receive what is effectively an up-front discount from the federal government through the Renewable Energy Target scheme (RET). You do not need to take any action to claim this incentive – it is passed through to you by the company that sells you your system, and should be incorporated into the final sticker price that they put forward to you.

The Tasmanian state government, in conjunction with local network company Aurora, offer interest-free financing on a range of ‘eligible products’, including solar PV systems. The Tasmanian Energy Efficiency Loan Scheme (TEELS) is a fantastic program that improves the accessibility of solar for residents of Hobart as well as the rest of the state. You can learn more about it here.

Is solar power worth it in Tasmania?

As the table below illustrates, solar can carry its own weight as an investment and a means of saving money on energy bills. While the outcomes (unsurprisingly) are not as attractive as sunnier cities like Brisbane and Sydney, solar most certainly makes sense for the right homes with the right sets of circumstances.

Keep in mind that the results in the table are based on average Hobart solar system prices – lower prices will yield even better results. Furthermore, we use generally conservative figures for the example below – including an efficiency rate of 75% and ‘high’ and ‘low’ solar-self consumption scenarios for each system size.

You can play with the numbers yourself using Solar Choice’s Solar System Payback & ROI Estimator tool, which will allow you to adjust variables such as system size and self-consumption ratio.

Solar Choice provides free advice and quote comparisons for customers across Australia. Our goal is to help customers to find the best deals on offer anywhere in the country – including Hobart, Launceston and the rest of Tasmania.