Solar tracking systems are frequently considered by project developers as an option for increasing the overall energy yield in medium- to large-scale ground-mounted solar PV systems. With solar PV system prices falling considerably in the past few years, in many situations, opting to use fixed-angle tilt frames still makes for a stronger business incentive as the additional costs and maintenance that tracking systems (especially dual-axis tracking systems) necessitate can outweigh the benefits.

The problem is not that tracking systems are futile, it’s that their price points can be so high as to mitigate the benefit of using them. It is with this point that the RTS cost transcends the alternatives as its dual-axis system is approximately equivalent to that of a single-axis tracker, even while it offers the yield-enhancing benefits of dual-axis tracking.

QBotix SolBot move along a steel track, automatically adjusting each solar array to the optimal angle and orientation throughout the day. (Image via QBotix.)

In addition to cost considerations, the complexity of dual-axis tracking technologies renders another reason to its infrequent deployment in solar farms. Compared to installations that use trackers, non-tracking systems are simple and contain no moving parts. QBotix’s RTS bypasses the problem of complexity by eliminating the need for much of the moving machinery that is necessary in conventional dual-axis tracking systems.

A single one of the company’s SolBots can replace hundreds of motors, working its way across a steel rail from one tracker to the next, to adjust each solar array to the optimal orientation and tilt angle as the sun moves through the sky each day. SolBots are completely autonomous, even charging their own batteries themselves. They are also durable enough to withstand even the toughest solar-friendly climates–namely, persistently hot, sunny, dry locations such as can be found across much of Australia. 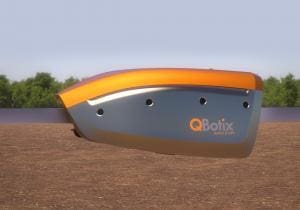 QBotix recently announced the arrival of the SolBot R-225, an enhanced version of its predecessor, the R-200. A single R-225 can manage up to 340kW of solar panels–up from 295kW–meaning a 13% improvement. The tracking rail for the R-225 ships in 2 pre-assembled pieces instead of multiple parts, saving time and money on installation. The R-225 is also smaller, lighter, and consists of fewer components than the R-220. 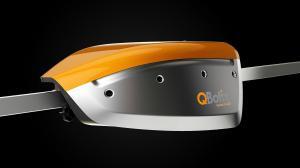 –A completely new a unique approach to solar tracking, allowing for dual axis-tracking performance at up-front costs comparable to single-axis tracking prices. The RTS can increase system yields by up to 30% compared to fixed arrays, or up to 10% compared to single-axis tracking arrays, reducing levelised cost of energy (LCOE) over the price of any solar farm or utility-scale solar power plant.

–Fast & easy installation: The RTS comes pre-assembled and does not require heavy equipment to install. The modular nature of the system means that solar projects from the multi-kilowatt to multi-megawatt range can be installed quickly.

–Can be installed without substantial ground works: Extensive land grading and trenching usually required with trackers are not commonly necessary with the RTS as the robots can run at up to a 3 degree grade.

–System-level intelligence and monitoring: The RTS monitors and provides data on all aspects of plant operation, including power generation and system diagnostics.

History in the industry: QBotix debuted its technology in 2012. In the first 5 months of 2013, its RTS has been deployed in over 200 megawatts worth of solar plants in 5 plants in the US and Japan.

Solar Choice also develops its own medium to large scale solar farms, and has gained considerable experience in all relevant stages of project management, from planning approvals through to Power Purchase Agreement negotiations and grid connectivity. We also have a large portfolio of land owners across Australia looking to lease their properties for solar farming. If you would like Solar Choice’s assistance to develop a solar farm from 2MW to 150MW, please contact Angus Gemmell on angus@solarchoice.net.au.