Homes and businesses are not the only ones investing in solar power in Australia: with electricity prices soaring and environmental concerns at the forefront of the minds of many, religious organisations are also looking to turn the sun to their advantage.

Since 2008, Solar Choice has been approached by a wide variety of churches (varying religions and denominations) looking to reduce their power bills and do their part for the environment. A number have made the decision to go solar, while several others are still actively considering the option and will likely proceed in the near future.

Both of the NSW churches that have gone ahead with a system–the iconic Saint Matthew’s in Manly and the Uniting Church in Willoughby–came to Solar Choice in order to obtain an impartial look at the market and a conservative business case without sales pitches from installation companies. Provided the numbers stacked up for them, both were aiming to make an example in clean energy and sustainable living for their respective congregations and members.

The churches furnished Solar Choice with their power bills, which allowed the Solar Choice Commercial team to determine what size system would best suit their needs and budget. Both churches narrowed down an initial shortlist of 5-7 installation companies presented to them through Solar Choice’s Tender Management Platform to a final two, who physically surveyed the sites and consulted directly with decision makers at the churches. Both churches have since moved ahead on having panels put up on their roofs.

Saint Matthew’s is one of the oldest churches in Australia and the oldest in the Manly-Warringah area, originally built in 1864 before replaced in the 1930s with the structure that stands on Manly’s world-famous Corso today. (It also happens to be located just around the corner from Solar Choice’s headquarters in Manly which made ongoing consultations easy and personable).

Analysis of the church’s power bills and available roof space by Solar Choice led to the conclusion that a split system would be the best solution; in the end, the church went with a 9.88 kilowatt (kW) array and 3.9kW array, for a total of ~14kW of capacity. The arrays were installed on the church’s administrative building, just behind the church itself. The church committee voted to go ahead on the installation in June this year, and the installation was completed shortly thereafter.

The Uniting Church in Willoughby, meanwhile, opted for a 15kW system to meet its electricity needs. The decision to go ahead with solar was made in mid-2013 and the system was installed a short time later. This church, clearly proud of its system, prominently displays a link to the Sunny Portal website, where anyone interested in doing so may look into the system’s performance since its SMA inverter went online. 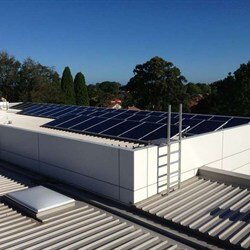 The 15kW solar array on the roof of the Uniting Church in Willoughby, NSW.

The installations for both of the above churches went smoothly, according to the installers involved as well as the churches themselves.

Among the other religious organisations that Solar Choice has assisted in making an informed choice of installer include the Newcastle branch of Youth with a Mission (who ultimately installed a 27.5kW system). Additionally, a number of churches have used Solar Choice’s impartial quote comparison service to take a look at the market. These include the Capalaba Community Church in Queensland, Saint Mark Coptic Orthodox Church in Kaleen, ACT, Springwood Uniting Church in Springwood, NSW, and the Coromandel Valley Uniting Church in South Australia.

In addition to these, there are countless other instances throughout Australia in which have opted to go solar. Among those we have been in touch with to discuss their experiences was the Glen Waverly Uniting Church outside of Melbourne, Victoria. Their 30kW system was installed with the intention of offsetting daytime electricity usage and is expected to reduce the church’s power bills by a whopping 70%, according to the church’s property chairperson Warren Greenwood. This will enable the church to pay the system off in about 6 years. Unfortunately, the network companies were less than cooperative in granting grid connection approval and an ombudsman had to be called in to kick them into gear, but in the end, the church members are happy to have their system installed.

The Glen Waverley Uniting Church made its solar commitment in the name of good environmental stewardship, and its efforts in this sphere extend to water as well, with a 70,000L water tank that runs its toilets.

The decision to go solar had 100% support from the congregation. 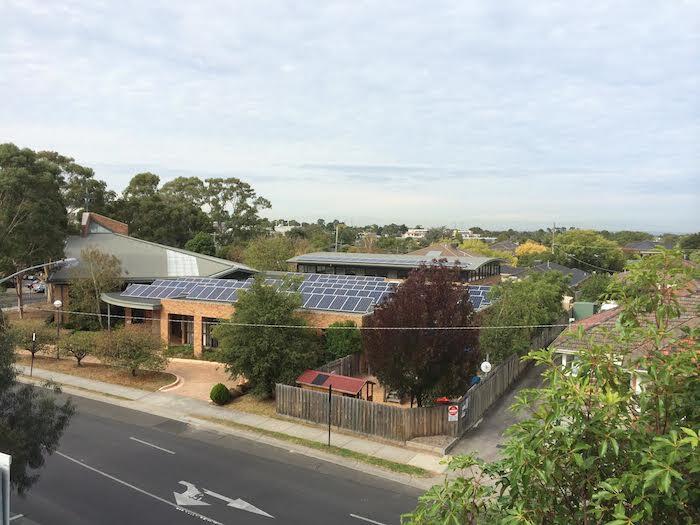