SolarBridge Technologies is a US-based company whose mission is to facilitate uptake of rooftop solar photovoltaics (PV) by reducing its complexity and improving its cost-efficiency, developing and manufacturing reliable, high-quality AC microinverters for integration with solar panels.

SolarBridge is at the forefront of a growing trend in solar PV: AC solar power.

A bit of background: Solar panels by default produce direct current (DC) electricity. However, the type of electricity that the power grid uses and which most appliances in your home require is alternating current (AC) electricity. The DC power produced by solar panels must therefore be converted to AC power in order to be used. This is done via a device called an inverter.

SolarBridge is a microinverter manufacturer that partners with solar panel manufacturers to produce ‘roof-ready’ AC solar panels, eliminating the need for a centralised inverter, and bringing a number other potential benefits.

A SolarBridge AC solar system is composed of 3 separate parts: Solar PV modules with integrated SolarBridge Pantheon microinverters, a Power Manager, which collects information from each panel via Power Line Communications over AC cabling, and a Power Portal, which makes that data available via an internet connection. 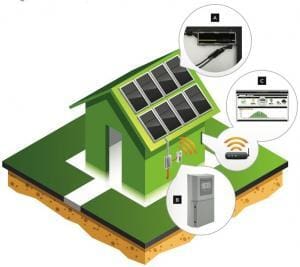 In order to understand what SolarBridge offers customers, it’s good to have a basic understanding of what kinds of solar systems are available on the market and how they differ from one another.

There are essentially 4 variations on these arrangement varieties.

In this arrangement, DC power is pumped through lengths of cabling to the inverter, where it is converted into usable AC electricity. This is by far the most common layout for residential and commercial solar PV systems. Centralised inverter efficiencies can be higher than 98%, but whole ‘strings’ of solar panels are susceptible to efficiency losses if even one panel is affected by a fault or by shading. It is also impossible here to monitor the performance of individual panels or easily troubleshoot power production issues. 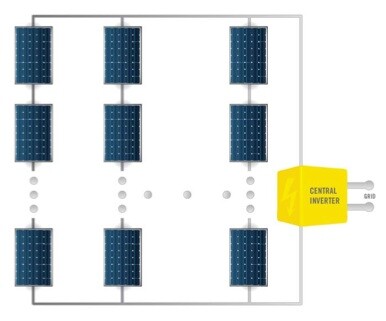 In this set-up, DC power from the panels is still converted to AC at the central inverter, but DC power is optimised on the module level (either integrated into the modules or attached on the mounting). This avoids the problem of underperforming modules bringing compromising solar panel string or whole system output, and can potentially improve overall solar system power yields. However, failure of the main inverter still results in the entire system being disabled, and having the module-level DC optimisers in addition to the main inverter makes troubleshooting and repairs potentially complicated. If they are not panel-integrated, the additional mounting and labour to install all the DC optimisers will also add to the cost of the system compared to a conventional one. 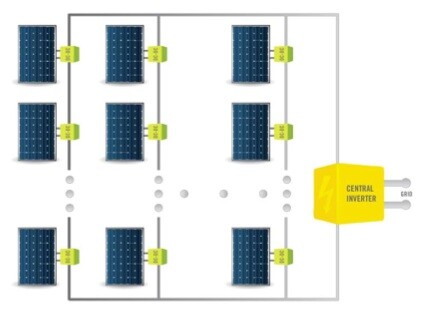 Here, power is converted from DC to AC on the module level, with ‘microinverters’ mounted to the solar panel array racking, but not to the modules themselves. This affords many of the same benefits of the DC-DC optimiser set-up, but without the added complication of a centralised inverter.

Like the DC-DC optimiser set-up, however, this arrangement requires additional components and labour for installation, which means additional costs. The relatively short warranty period for most microinverters (5-15 years) also means that, when replacement time eventually rolls around, the owner has to make a decision whether to replace just the faulty one or the whole lot. (A centralised inverter will typically have a warranty of about 5-10 years, but replacement is relatively simple and usually does not even require accessing the roof or the panel array.)

Installations using microinverters also bring certain safety benefits. As DC electricity is more dangerous than AC, the shorter lengths of DC cabling that go with microinverter systems decreases some of the risks that may be associated with conventional systems or DC-DC optimiser systems.

AC solar modules (such as SolarBridge’s) afford all the same benefits as microinverters, but without the added installation headaches associated with having a greater number of separate parts, because the inverter and the panel are integrated into a single unit. Installing an array of AC modules is therefore even simpler than installing a DC solar panel array because no inverter installation is required. An AC solar module set-up is still potentially vulnerable to the same problem as microinverters as mentioned above–i.e. that when replacement time comes around, the owner will have to weigh their options about whether to replace all the panels or just the underperforming one.

The company intends that AC solar modules that use its Pantheon microinverters provide a way to ensure higher overall system yields across the system’s operational lifetime without all the same complications and potentially higher up-front costs of a microinverter set-up or a DC-DC optimiser set-up. In doing so, it could change the way that rooftop solar power is conceptualised, with solar-going customers routinely being offered a choice between DC or AC solar systems.

Watch a video about SolarBridge’s commitment to reliablility:

All images via SolarBridge Technologies.