‘The federal solar rebate is falling!’ is a cry that Solar Choice has been hearing pretty loudly from our customers, website visitors and installers in and outside our network for the past few days. From a customer’s perspective, what do you need to know about what’s happening with this government solar incentive?

In Australia there is an incentive for rooftop solar systems available through the federal government colloquially (but incorrectly) referred to as the ‘solar rebate’. The incentive itself comes in the form of Small-Scale Technology Certificates (STCs), which are in most cases applied directly to the out-of-pocket cost of having a solar system installed. This means that you, as the customer, benefit from this program without having to lift a finger – which is why it is not technically a ‘rebate’ (as there’s no need to claim any money back).

Get a free, instant Quote Comparison

How the STC incentive works is a bit complicated (see an explanation here), but in a nutshell STCs are tradeable certificates whose value fluctuates with supply and demand. Historically, the trading price of a single certificate has fallen to as little $16, while the de facto price cap is about $40 per certificate.

The Clean Energy Regulator (CER, the federal government body overseeing the implementation of the RET) sets the size of the market for STCs on an annual basis, based on how much small-scale renewable energy systems (including but not limited to rooftop solar) they expect to be installed in the coming year.

When the market pans out to be more or less in line with the Clean Energy Regulator’s forward-looking projections, supply meets demand and prices remain stable. This has been the case for the last several years, with STC prices hovering around $37 per certificate – which translated into an incentive of roughly $3,500 for a 5kW solar system in Sydney, or about 1/3 the pre-subsidy price.

However, no forecast is ever 100% accurate, and some years they can be less accurate than others. In the case of this year, the CER underestimated the number of STCs that would be available on the market due to:

As a result, the market is being flooded with STCs in excess of the annual target set by the CER. As anticipated supply quickly outstrips this mandated demand, STC prices have begun to fall significantly. At the time of writing, the STC price is about $27 per certificate – the lowest it’s been in quite some time.

So what’s going to happen with solar system prices?

Australia is home to some of the lowest solar PV system prices in the world, thanks in large part to the STC incentive. When a solar company commissions your rooftop solar system, they can then create STCs and sell them to traders or the ‘liable entities’ who are legally obligated to obtain them under the RET. Solar companies generally set their system installation prices based in part on what they expect to get for the STCs – which for the last few years has been pretty predictable (i.e. about $37 per certificate). 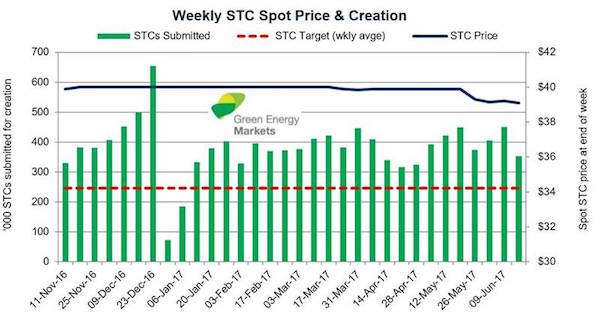 Because STCs act as an up-front discount off the cost of a solar system, STC price decreases (theoretically) manifest themselves in the form of higher solar system prices.

The end result is that we’re likely to see an increase in average solar system prices from a lot of solar companies around Australia. Unfortunately, if STC prices stay low for any number of months, it could also mean that some solar companies could be forced to close up shop.

A high pressure sales tactic – or a good chance to get a deal?

Some companies may be bona fide offering special ‘last minute’ deals based on the STC price news, so don’t immediately write STC talk off as a high pressure sales tactic – the deals could be real. That being said, do not go ahead with a system right now if you don’t feel confident about making a decision yet. If you have been looking into solar for a while but just haven’t felt any kind of urgency about it, now might be a good time to take action.

When will solar system prices increase?

The short answer is that they’re already increasing, although there’s a bit of variability in which companies will put up prices, when they’ll do it and by how much.

Some solar companies might have STC prices locked in for a period of time or up to a certain volume, which means they may be able to carry on at current prices for a while yet. Additionally, some companies may honour current prices for another week or two as they watch the market, but others may not (check the terms of their offers, especially if you’ve already paid a deposit – discussed below).

It’s also useful to keep these fluctuations in mind through your conversations with solar companies. Many of them are currently in the process of re-calibrating their solar system prices in light of the STC price changes. While in some cases this might mean that you get a good deal before prices rise, don’t go ahead unless you’ve already done all your research and are ready to make a decision anyway.

When will the STC prices rise again?

No one knows what’s going to happen with STC pricing going forward, but because demand for STCs will not change until the CER sets its target for next year, it seems pretty clear that there is going to be a glut of certificates on the market will push down prices for the coming months, possibly lasting into early next year. The good news is that the CER sets the annual target in accordance with anticipated demand, and hopefully their modelling for next year will take into account the groundswell of interest in solar that we’re seeing now – offering some stability to the market for 2018.

How much could solar system prices increase?

The table below shows pricing for 5kW solar systems in Australia’s capital cities. The ‘core’ prices (which assume about $37 per STC) are taken from Solar Choice’s Solar PV Price Index for July 2017 with the idea that they represent current average prices for each capital city. (Note that cities are grouped by STC ‘zone’, which is based on solar irradiation levels and dictates the number of STCs created by systems of the same size).

We then extrapolated backwards and added on the losses that solar companies would incur if STC prices drop to get an idea of how solar system prices could potentially rise. For example, how much more would a 5kW system cost the STC price dropped to $25, $15 or $5?

(Note that the table assumes that solar companies increase prices to recoup all losses from STC increases – the reality is that they may adjust their pricing to a lesser degree to stay competitive. It also assumes that there aren’t any other factors – such as panel supply issues – that drive up solar system prices for other reasons.)

Is now still a good time to go solar?

Let’s get one thing straight: Rooftop solar is both affordable and a good investment in Australia thanks to a confluence of factors. Prices are currently so low that even if they increase a bit rooftop solar will still be attractive to most homes, especially with grid electricity prices on the rise as they are. It’s not a question of whether solar will be ‘worth it’ if prices go up – it’s a question of the degree of attractiveness, and the degrees we’re talking about are ‘excellent’, ‘great’ and ‘good’ for most homes.

Our indicative analysis, presented in the table below, is that the investment case for going solar would arguably still look ‘good’ even if STC prices got down to $15 per certificate and customers bore the full brunt of the incentive reduction.

Even in an an (almost) worst case scenario where STC prices got down to $5 per certificate, payback periods would be well under 10 years for systems that should last about 25 years (the minimum warranty on solar panels in Australia) – not to mention internal rates of return that out-compete term deposits by a long distance.

Estimates using Solar Choice’s Solar PV System Payback Estimator tool. Assumptions: Flat retail electricity rate of 25c/kWh, feed-in rate of 12c/kWh for all cities but Darwin (where we used 25c/kWh) and a solar self-consumption ratio of 40%. Figures in this table are indicative only – your circumstances will almost certainly differ. Also note that any increases to the self-consumption ratio will help to improve the investment case further (except for Darwin, where it doesn’t matter whether you self-consume or export).

Although it may sound a bit obvious, keep in mind that every day without solar is a day that you don’t benefit from solar savings. This means more money that you’ll be paying on your electricity bill instead of saving with solar. If you manage to save $1,000 in the first year after installing a solar system – which is not hard to achieve-  that should make up for most the additional costs associated with installing a system now as opposed to waiting until prices come down again.

What if you’ve already paid a deposit on a system?

If you’ve already paid a deposit on a system at an agreed upon price which includes the STC discount, the company who sold you the system may be coming back to you advising that STC prices have fallen and that they need to adjust your pricing.

STC price variability is a fact of life for anyone is involved in the solar industry, but for the past few years prices have been so steady that many companies took for granted that they would remain at or around the $37 mark – but the events of this week have proved otherwise. Perhaps when you first discussed solar with your installer, they didn’t even mention that STC prices could change (probably because they forgot that STC prices could change).

Whoever they are, they’re going to have one of the following responses:

Hopefully this will give you the confidence you need to deal with whatever situation you’re facing.

This too shall pass 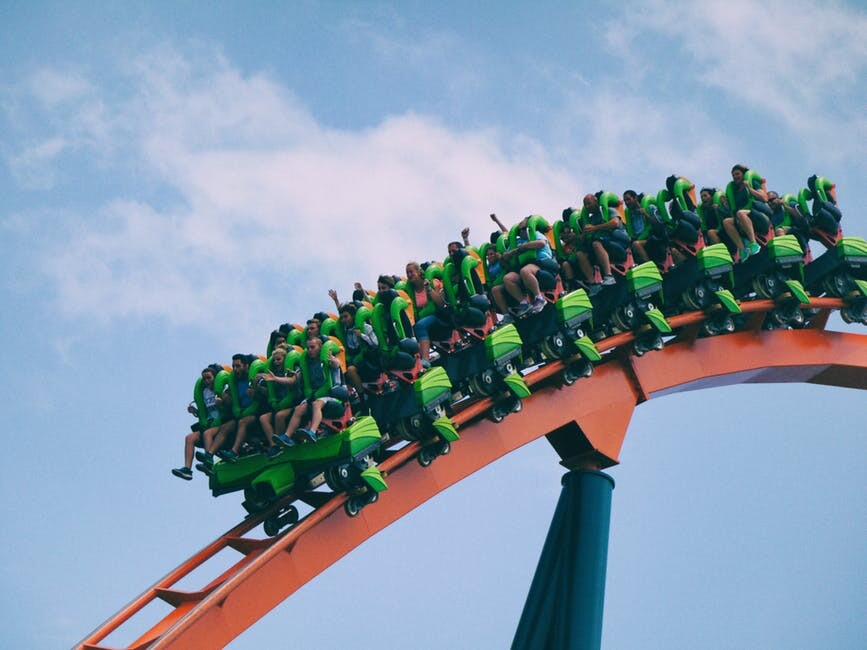 Australia’s solar industry has been through its fair share of ups, downs & upsets over the past 8 or 9 years, but it’s still here and it’s arguably stronger and definitely more competitive than ever. Through all of this tumult, Australians have still been opting to go solar in droves because it makes sense.

If you take one thing away from this article, it’s to not be completely spooked by the STC news – and definitely don’t be pressured into making a decision about going solar before you’re ready. Now is a good time to go solar, but next week or next week will still be a good time for it as well.

That being said, if you know what you’re looking for and have a good understanding of the solar market, now might be a great time to snag a deal – especially if you’re a well-informed commercial organisation whose favoured solar company is offering to hold STC prices on a larger (and more expensive) system if you move now.