Welcome to the hottest day of the year so far, with temperatures in Newcastle soaring to 34 degrees around the middle of the day. Because my life is full of excitement, two of the most noteworthy moments from my day at home were a) spotting a gigantic blue tongue in the back yard hiding behind the shade of a wall and 2) turning on the air conditioning.

The visit from the blue tongue lead to me having a certain Dead Milkmen song stuck in my head for the rest of the day. It also means that I’ve now got a goofy video of myself trying to film it as it walked through the bushes and jumping every time the thing moved. I know they’re harmless, but how often do you get reptilian wildlife that big hanging out in your yard? Thing looks like a bloody miniature crocodile. I hear that they’re good climbers, so I’m hoping it eats at least a few of the spiders out there, of which there are an abundance. 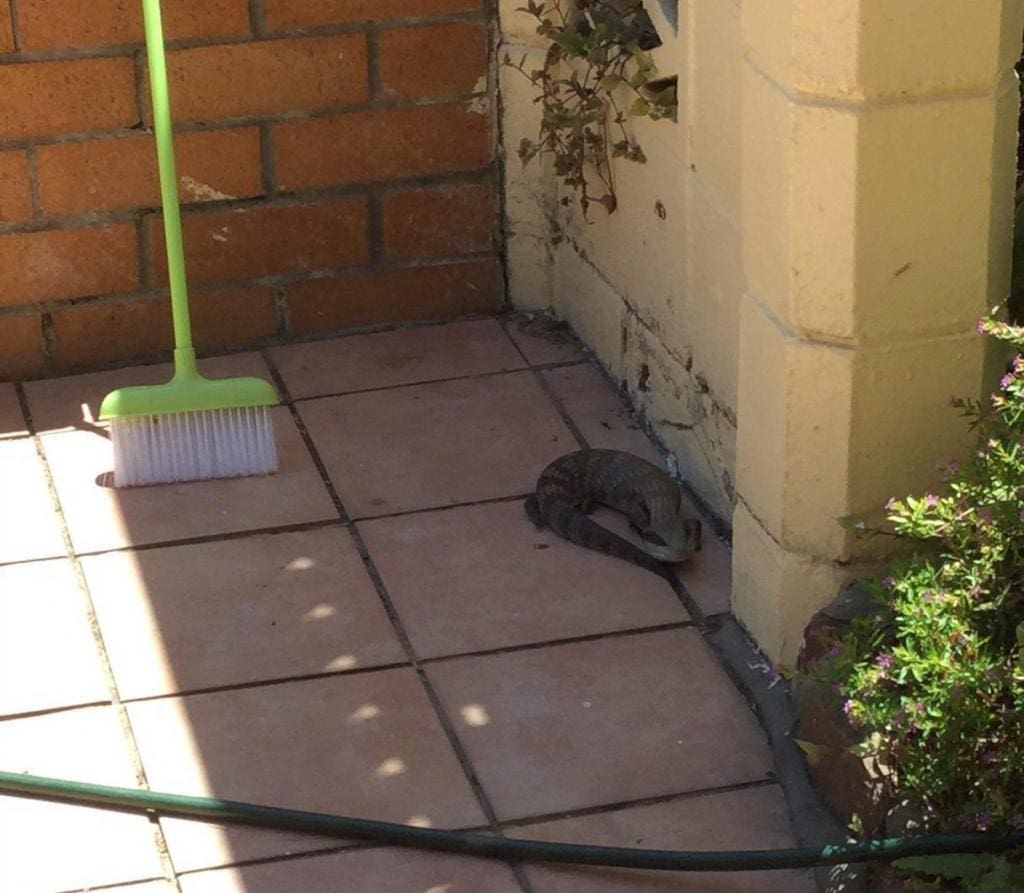 Our new neighbour, beating the heat in the shade.

The second event – switching on the non-zoned, ducted AC – was definitely more frightening. The previous owners of the house at one point must have decided that they needed the most full-on air conditioning unit that they could afford, so what we’ve got is a huge Pioneer unit that runs on 3-phase power (it’s unclear if they upgraded to 3-phase specifically for the AC, or if it was already there and they were just taking advantage of it). Furthermore, it looks like it’s probably about 15 or 20 years old, which means it’s probably not the most efficient system in the world and would have been used more back when electricity was cheaper.

Long story short, it draws a lot of power.

As noted in the last episode, I’m still working on getting proper monitoring put in, but my incomplete carbonTRACK system gives me a pretty good idea of what I need to know about what the AC will do to my electricity bill if I run it all the time.

Can you guess when I turned on the air conditioning?

The graph above shows one day’s worth of data. The one below shows a week’s worth, putting today’s events in even starker relief.

I’m hoping it’s not going to be a hot summer.

Because the monitoring is out of whack, I can’t tell exactly how much the AC cost me to run today, but with a 40c/kWh peak charge from 2pm on weekdays (I’m on a time of use tariff), I’m reasonably sure that it was more than what I’d pay for a coffee (or three). Because it was a cloudless day, the solar on the roof would have helped to curtail some of that, but because of the fact that I’ve currently only got one of the two separate systems monitored, it’s hard to know by how much.

I’m not usually a huge fan of air conditioning, and will only turn it on if it’s at the point where you sweat even if you’re sitting completely still in front of a computer (as I do too often). My threshold might be a bit lower these days because I’ve got a larval human living in my house who tends to run hot (that is, a sweaty little 2 year old), however – which means we could be running this thing quite a bit over the summer (or looking into buying a more efficient one in the near future…) In either case, we’re potentially looking at a not insubstantial amount of money for our comfort.

Did you know that solar panels love sunlight but don’t like the heat? In fact, the hotter it gets, the less power your panels will produce – a cool, cloudless day will result in higher solar energy yields than a hot, cloudless day with the same number of hours of sunlight. Solar panels actually have a term for this on their spec sheets – it’s called the ‘heat loss coefficient’, and it’s generally close to half a percent per degree above the nominal operating cell temperature (NOCT), which is 45C. (Note that this is the temperature of the solar cell and not the ambient air temperature – the former is almost always higher than the latter.)

I won’t get into the details, but it’s interesting (for me, anyhow) to see via my GoodWe inverter monitoring portal that solar production from that system for today (13.6kWh) was actually slightly less than yesterday (14.3kWh) despite the fact that both days were totally bereft of clouds. Although the impact isn’t huge (less than 1kWh) in this case, it’s a reminder that the heat loss coefficient is more important to look at if you live in a climate where the temperature regularly goes above 30C. 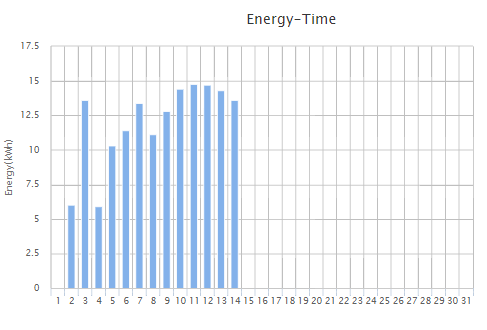 Screenshot from the monitoring portal for my GoodWe inverter (I have a second system with a Samil inverter). Solar production for 14 Dec was lower than 13 Dec due to higher temperatures, which impeded performance.