We know that the tilt and orientation of your solar panels can make a difference when it comes to solar PV system energy yields, but what impact do these factors have when you use your solar panels to charge a battery bank? We’ve taken a look in this article.

There are numerous factors that need to be taken into consideration when it comes to getting the most value out of a battery storage system. One of these factors is how and when the batteries are charged. Although it may be beneficial for solar system owners on a time of use (TOU) electricity tariff to charge their batteries with both their solar panels and the grid (read more about battery cycling), most solar homes are likely to stick with simple solar charging. And in any case, solar charging is the primary way for a home to get value from their batteries, so it’s worth thinking about whether panel orientation matters.

Using Sunwiz’s PVSell software, we investigated a few scenarios in order to work out which orientation (north, east or west) would help solar homes to maximise the value of their solar + battery storage system. We also looked at whether energy consumption patterns made a difference – specifically, we modelled the ‘double hump’, ‘evening peak’ and ‘day focus’ consumption patterns (explained below). 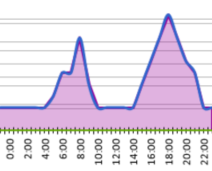 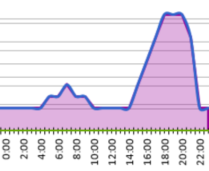 Example of the ‘evening peak‘ energy consumption pattern – typical for households without children, where occupants are out working during the day. 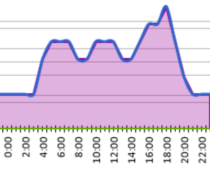 Example of the ‘day focus‘ energy consumption pattern – typical for retirees or people with a home office.

The example: A Brisbane home

The example home we used had the following features.

After plugging in these numbers for a total of nine different scenarios, we looked at the resultant payback periods and battery capacity utilisation to determine which situations would result in the best outcomes.

Please note that our investigations and conclusions here are quite limited in scope, and may not necessarily be applicable to your situation. We recommend that you do your own investigating and speak to several installers to learn as much as possible before you go ahead with making a decision on a system. We recommend that you start by checking out some of our solar & storage calculator tools, and getting quotes from installers in your area.

North is probably still the best orientation – with or without batteries

It’s fairly common knowledge that north is the best orientation for solar panels in the southern hemisphere. Provided that there is no shading, panels that face north will produce more energy than those that face east or west (south is usually out of the question). That being said, east or west-facing arrays can be viable where north-facing is not an option – although west is generally recommended over east for homes without batteries.

Since batteries have become a hot topic, we’ve heard speculation that an east-facing solar system may more advantageous for homes with a battery bank than a north-facing panel array. The reasoning goes that the additional sunlight earlier on (vs a north-facing system) would help to meet the morning demand, ensuring that more of the solar energy is either put to direct use or used to charge the batteries (as opposed to being exported to the grid at a low rate).

Our analysis confirms that there appears to be some validity to the idea – but that the difference for a small-scale solar & battery system is minimal. All things being equal, an east-facing array would deliver a slightly shorter payback period than a north-facing array only if the home has a ‘double hump’ consumption pattern – and the difference would only be about 3 months. For ‘evening peak’ and ‘day focus’ consumption patterns, a north-facing array will deliver the shorter payback (as per the table below).

Payback periods for a Brisbane home with a 3kW solar system, a 3.3kWh LG Chem battery and 25kWh of energy consumption per day (on average).

Perhaps the more important thing to notice here, however, is that household consumption patterns are a more important determinant of payback period length than solar panel array orientation. A ‘day focus’ home will almost always have a shorter payback period because they will be in the best position to use the solar energy in real-time, as it is generated. Solar energy holds the highest value for a home when it is ‘self-consumed‘; storing the solar in batteries is the second best use, while exporting it to the grid delivers the least value (due to low solar feed-in tariffs).

Understand, however, that this means that it’s the solar panels themselves that are creating the most savings – not the batteries. In fact, as the table below shows, a day focus home actually has the lowest level of battery capacity utilisation of the three consumption patterns we looked at. In essence, the batteries are not even working as ‘hard’ as they would be in the other consumption pattern scenarios (see table below), but the system nevertheless delivers a better payback.

This shouldn’t come as a surprise: it’s not news to anyone who’s been paying attention that battery prices are still too high to make sense from a pure financial perspective (except in a handful of situations). There are still good reasons to get batteries – for example, if you want a backup in the event of a blackout or if you like the idea of energy independence. If you do invest in batteries, however, it’s usually wise to select a smaller system which can later be expanded.