Fronius is one of the most highly-regarded and popular solar inverter manufacturers in Australia. On the back of this success, last year the company ramped up its activities with regard to home energy storage, introducing two ‘energy packages’ which feature Fronius’ Symo Hybrid inverter in combination with a battery bank.

The package likely to get the most attention is the ‘Fronius Energy Package Powerwall’, which pairs up the company’s Symo Hybrid with Tesla’s much vaunted Powerwall battery bank. Since its launch last year, people from around the country have lined up to get their hands on the Powerwall – which somehow managed to set a benchmark for the Australian solar industry without a single unit having been installed. Fronius’ other energy package – the Fronius Energy Package – incorporates the company’s own-branded Fronius Solar Battery, whose size and features make it an attractive alternative to the Powerwall.

But homes can’t plug their appliances directly into a battery bank – Powerwall or otherwise: every system requires an inverter to convert the stored energy into usable electrical power. As a hybrid inverter, the Symo Hybrid allows for batteries to be used in both pre-existing solar (retrofit) and new-build residential solar-plus-storage systems. In this way, Symo Hybrid makes each of Fronius’ packages just that – a complete package.

Solar Choice recently caught up with Fronius Australia’s managing director, Adrian Noronho, to ask some questions about both of these offerings and to learn a bit more about the company’s products. We also talked about how the company is aiming to position itself in the the solar, storage and home energy management spaces in Australia – and how it intends to help Australian homes achieve the dream of ’24 hours of sun’.

Q: Fronius is well-known in Australia for their solar inverters. What energy storage credentials does Fronius have in terms of its history and business?

Critical to the application of energy storage is the control of energy through intelligently charging and discharging the system. This is where we believe our credentials give us a unique advantage as a supplier of solar inverters; Fronius started out in 1945 developing battery chargers for the automotive industry and we are still a technology leader to this day with an array of highly efficient charging solutions.

In addition to battery charging systems, for the past eight years Fronius has been researching and developing hydrogen fuel cell technologies for long-term energy storage systems.

Q: What prompted Fronius to get into the energy storage space in Australia?

The company’s vision, ‘24 hours of sun’ is about what we can do to help accelerate the transition to a 100% sustainable energy supply. Energy storage is central to this vision. Given that two of our three divisions have developed a unique and robust expertise in both the inversion of DC solar power and how to store energy for subsequent use, we feel that we have a lot to offer in this space.

As far as deciding to choose Australia as a target market for our first solar energy storage product, the Fronius Energy Package, there are a few compelling reasons.

The combination of great solar resources, increasing electricity prices and the willingness of residential to small/medium commercial electricity consumers to embrace the idea of solar PV provides the scope to grow an energy storage market. Many Australian’s have already installed solar, and many of those are under feed-in tariff schemes that will expire in the next years. Retrofitting energy storage systems to existing solar PV systems therefore seems to have real potential, even as early as the end of this year.

There is also a longer term potential for energy storage systems in Australia that addresses how electricity markets and the network need to evolve. Due to large transmission distance and localised population density, many challenges regarding network development and cost occur. Solar energy storage allows the user to conveniently self-consume more solar power and offset carbon emissions. At the same time, storage is able to deliver great value to the grid by increasing flexibility, reliability and reducing transmission costs. Moving from centralised to a decentralised energy supply through storage systems will drastically transform the electricity market and will open up many new opportunities for other innovative technologies.

There is still a lot of framework development and innovation that needs to take place so the value of renewable energy storage can be fully realised, however storage is an inevitability that is fast taking shape in Australia. 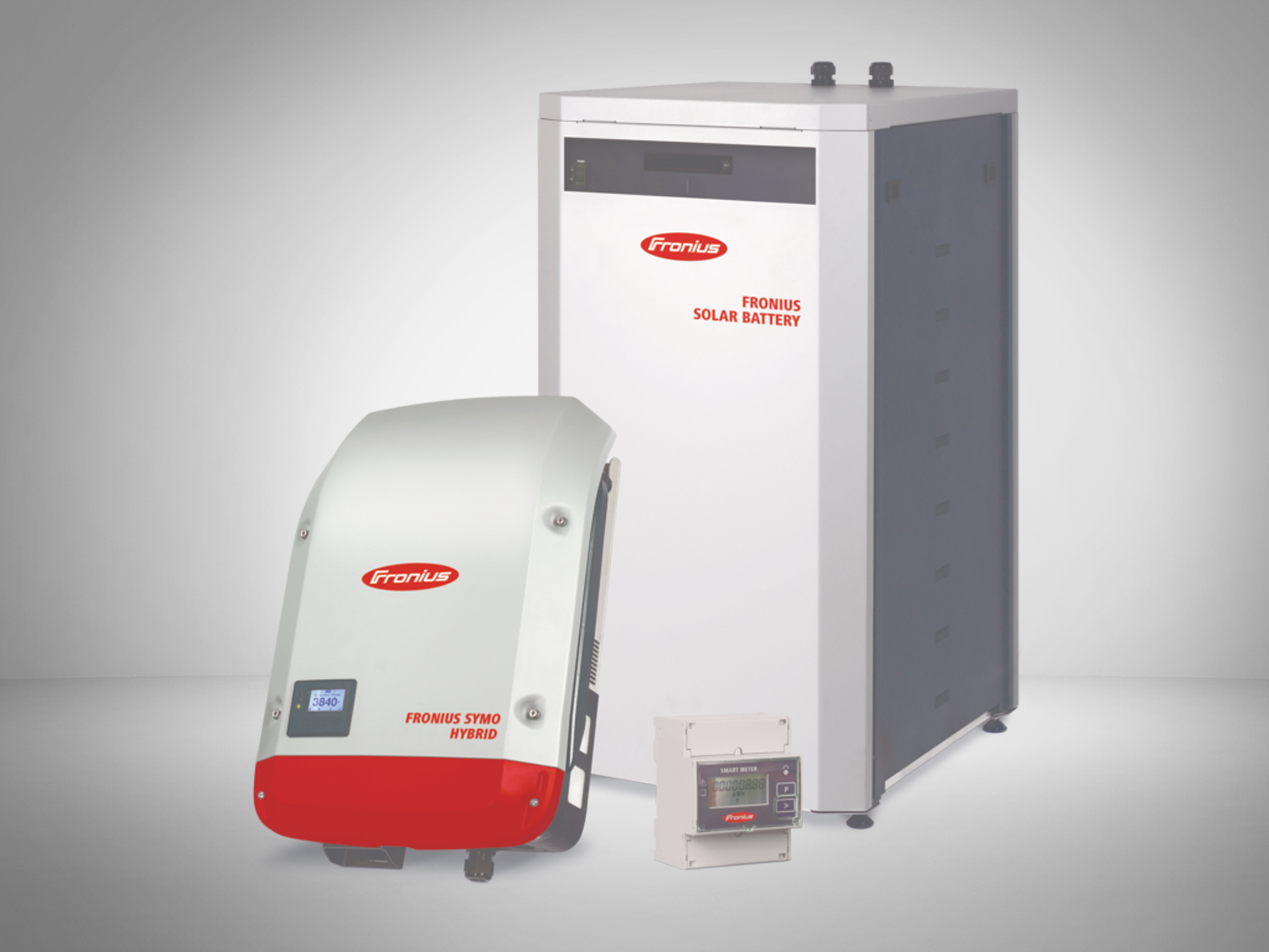 The Fronius Solar battery has been designed to allow the customer flexibility in choosing a battery system that fits exactly to their usage needs, either at the time of purchase or through retrofitting battery modules at a later date (up to 12kWh/9.6kWh usable). An indoor unit, the Fronius Solar battery boasts 8000 charging cycles and is extremely durable.

The Tesla Powerwall is a slim, wall-mounted battery capable of indoor or outdoor installation. The Powerwall contains 6.4kWh of usable energy storage along with an internal thermal control system enabling reliable operation in a wide range of climates. 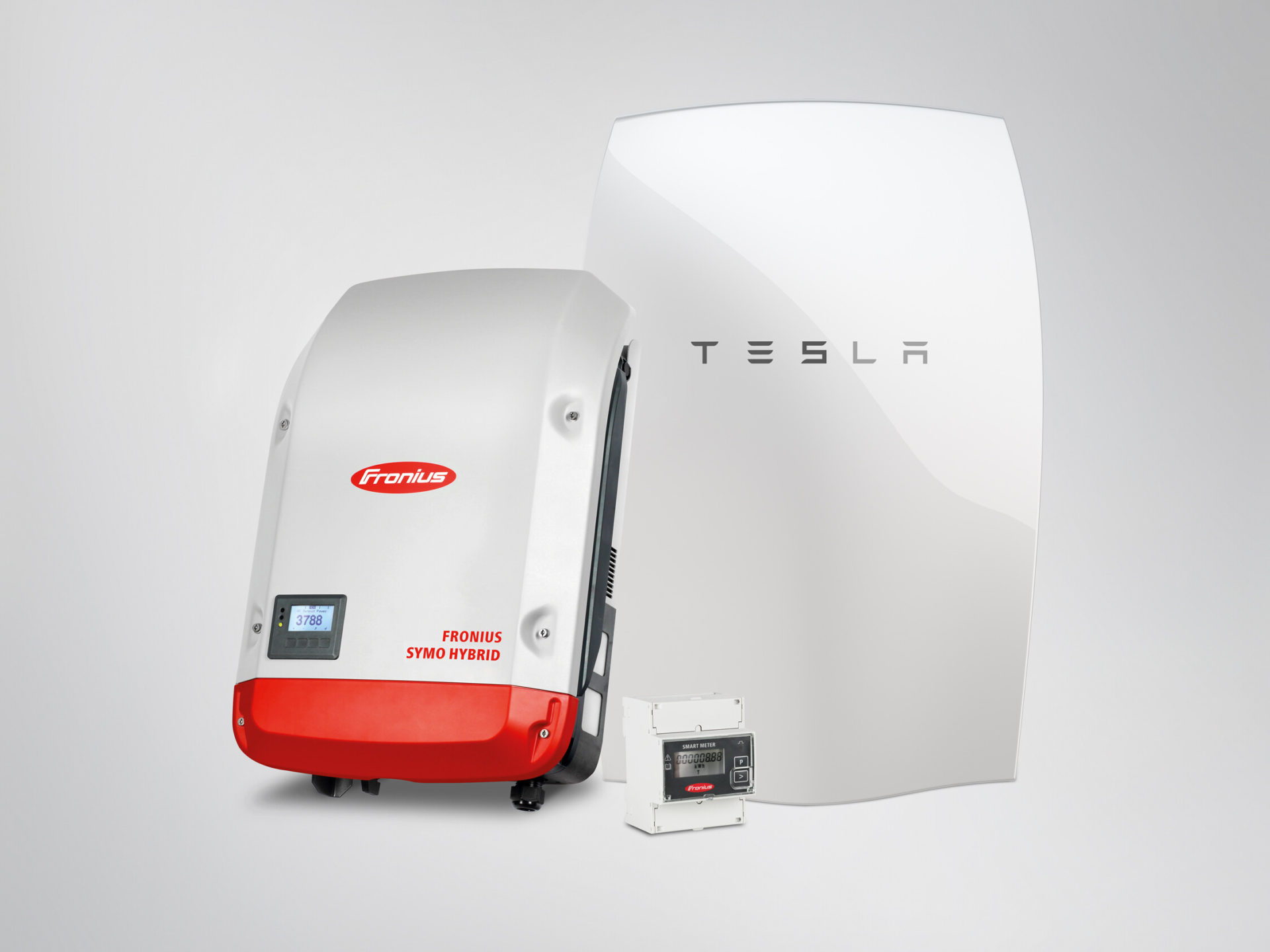 For transformation truly to occur people must be inspired to embrace a new mindset and it appears that the Powerwall has captured the imagination of many here in Australia. I have never seen such excitement about a solar product as I have with the Tesla Powerwall. We had a display unit of the Powerwall at our most recent exhibition booth during All-Energy 2015 and people kept coming to take selfies with the Powerwall – it was brilliant to see so much buzz surrounding solar.

Q: Tesla’s Powerwall has caused a huge stir in Australia since its announcement – it’s probably the single most sought-after battery solution in the country so far. How did the Fronius-Powerwall partnership come to be? Is it something that has happened only for the Australian market?

The decision to work together on the Powerwall came about through a shared vision of sustainable energy, in particular energy storage. As we had already started development for the Fronius Symo Hybrid, we could demonstrate many of the functions that Tesla had in mind for the Powerwall. When discussions with Tesla Energy started to take place there was already a huge potential to create a perfect fit for the Powerwall.

The partnership is global but will initially focus in Australia, Europe and the US Australian consumers, however, appear to have a particularly strong interest in the Powerwall.

Q: More generally, what features should a household look for in a battery storage system?

As mentioned before, energy storage systems have a massive potential to revolutionise how energy is consumed. This is dependent, however, on much more than the availability of adequate technology alone – policy, regulation, new business models and economies of scale all play important roles. Our advice to customers interested in buying an energy storage system, therefore, is not only to think about the energy needs of today, but also to think about how they might change in the near future. The key is to pick a flexible system that can be adapted over time to accommodate industry developments.

There seems to be a tendency for people to think about a hybrid inverter as a standard inverter that can charge and discharge a battery. However, adding storage to a system brings with it many variables that make designing a system for long-term benefit more complex, including:

The way we have addressed this challenge is through a technology called Multiflow technology, which features in the Fronius Symo Hybrid. Mutiflow Technology not only enables power conversion of both DC to AC and AC to DC, but also can do both simultaneously. This means that if the customer’s needs change over time, the Fronius Symo Hybrid can adapt to them by receiving a remote software update and adjusting its control algorithms to maximise the customer’s benefit. Although hybrid solar inverters may appear similar and may even have the provision for software updates, they can be vastly different regarding the flexibility of their hardware and control algorithms.

Q: Is there anything else in store for Fronius on the energy storage front in the near future?

Around Q4, 2016 we expect to release a single-phase version of our hybrid inverter.